I have been monitoring this counter for quite awhile now - and as a member of various Facebook and Telegram groups on stock market investments, this Crest Builder name, or 8591 always pops up and I have picked up a bit of shares of this counter. For the last few nights, I had been studying through the construction sector; not the mega stocks (too expensive to invest lah), just the cheaper ones just to see which counter to buy more, which ones to sell, and which ones to keep.
One of the stock market sifus based down south keeps on recommending CRESBLD - so I decided to put more time to study this counter as well, so that I can write this piece. I have a few friends who are working in Crest Builder, so I managed to get some input from them as well. However, attempts to contact the rep or the management or Mr Eric Yong has been unsuccessful - perhaps he did not check his 'Facebook Friend Requests' list the last few days.

I will put my paragraphs in point form, so as to easier to 'refer' back.

1. CREST BUILDER HOLDINGS BERHAD has been around for apparently over 30 years; but it was only listed in 2003 via a reverse takeover of MGR Corporation Bhd, previously a very troubled company. Crest is primarily involved in construction and property development, and in recent years, concession as well. They also have a property investment division whereby they collect rentals from their completed buildings.

2. The Group is run by the Yong family. The founder is an ex JKR engineer, the late Mr Yong Soon Chow. Ever since his demise in 2015, Mr Eric Yong has taken over as the Group Managing Director. I also sight another Yong on the board, Ms Yong Tiok Keng whom I believe is the sister to Eric. Madam Koh Hua Lan is the mother to Eric. An interesting character on the board is the Tengku Dato Sulaiman Jalil Shah, who is the Chairman of the Board. Checks show that Tengku is related to the Selangor royalty. Taking into account of the last 13 quarters (from FY2016 til now), the revenue has been on a uptrend every quarter, give or take a few one off higher ones (Q3 FY18). And then take a look at the Q1 results from the last few years, it has been on an uptrend - from a RM 5.28m PBT, to RM 9.9m, to RM 12.4m til yesterday, RM 16.741m.
As how I have studied through the Construction sector, construction counters are rather cyclical - as the nature of business is subject to the weather and public holidays. In a country where we celebrate numerous new years all year round, it is safe to assume that Quarter 1s for most contractors would be amongst the lowest for the year (as shown above).
However, the key takeout from this is that there is a steady growth in its Q1 results Year-on-Year - which is positive.

If you look at the counters all over Bursa, you'll find that Crest Builder is amongst the top 10, (at one point top 3) on share buy backs. This would be a clear indication that the management believes that the counter is worth more than its share price, and most importantly, it shows that it has a very healthy finances for Bursa to approve for them to do share buy back. If a company is not solvent or not financially strong enough, Bursa would not approve for the counter to do share buyback.

6. How about a rather ridiculous Price-to-Book Ratio? Lets look at the chart again.

The NTA of the counter has been constantly going up - currently NTA is 2.96.
But what price is it trading at now??? At RM 1.06, the P/B ratio is 0.35... if Mr Eric appoints me as his adviser, I would advise him to PRIVATIZE the company! If the market dont see this value, you should just privatize! Haha...

7. They have a RM 1.1bil outstanding unbilled order book.
My friends in Crest Builder told me that this figure is good to last them til end 2020 and they have an aggressive order book replenishment target of about RM 500mil per year. This year they have so far secured RM100mil for a hotel project in Kuala Lumpur. Based on the newspaper reports and announcements, I think their largest contracts to date is the Sime Darby Property mall project in Melawati as well as a high end condominium project South Brooks in Desa ParkCity.
Question mark.... it is already mid year now. Will they be able to secure the balance target?

8. Dividends. Not that good. But very stable. And consistent. 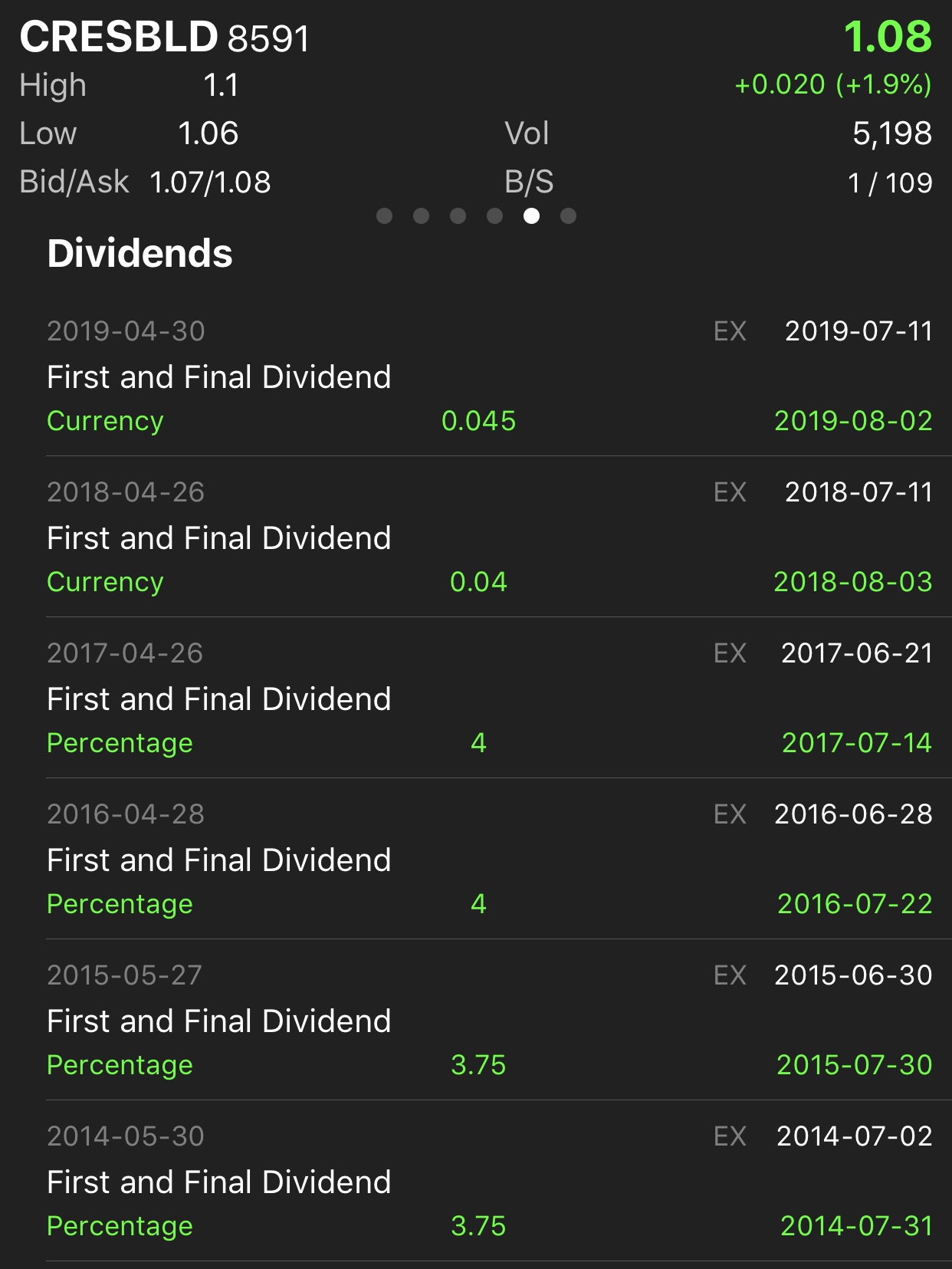 I would be hoping for them to give out more dividends, or higher dividends. But then I am not 'violently' complaining for more - at least the dividends is CONSISTENT! I read that they intend to formalize their dividend policy soon, and I think it will be coming soon. and of cos.... at least, there will be 4.5 cents this year!

9. Recurring Income
If you compare Crest Builder to its more similar peers such as INTA, GDB, ADVANCECON, MITRAJAYA... you will see that Crest has a steady stream of recurring income. Ignore the watermark on the picture pls, sorry couldnt find a pic without watermark.
Crest owns two investment properties - the Crest at 3 Two Square (I think that is where their office is) and Tierra Crest, in Petaling Jaya. Both properties are considered to be matured properties already, probably due for some upgrading and renovation. According to their Annual Report 2018, the investment holding division reported a revenue of RM15.9 million and I think this is a plus point to the financials.
Crest also owns a concession business - a 23 year UiTM concession. Under this concession, the MOE pays them RM 43.5mil every year and a profit of about RM 10 mil every year.

10. Gearing Ratio Improving
If you look at Crest's gearing, it is rather high. I asked my friends in Crest Builder this question - and was told this was due to the financing for the UiTM project whereby they took a RM 500 mil sukuk as well as the long term loans secured against its investment properties.
Well, I think this sounds totally logical. I guess if you were to remove these long term finances, their gearing could be as low, or lower than its closest peers.

So, then why is CREST BUILDER trading at a P/E of less than 2.5x ?
Like what I read on one of the Facebook groups, the sifu opined in response to some comments that "our so called investors / retailers is that most are IDIOTS !!!!! most wants it to be fast and furious and most eventually gets roasted...." and even last night, mentioned that most investors today are immature, who wants to make fast gains and is treating the stock market like a casino.

Okay, I shall stick to these points first - and post this. Hopefully someone would show this to Mr Eric and he will add me as a friend on Facebook so that I can contact him for more information to write a more in-depth post on the counter.