On August 24, 2019
I think many of you will identify with this post. I was away for nearly 2 weeks and my dog Dali was at my groomer's. Mind you I have been at the same groomer for over 9 years. Plus she has a number of cats and dogs as well under her care. I never had any problems before.

When I picked her up, she had been chasing cats at her ripe old age of nearly 11. I was disheartened to see her limping towards me when I picked her up. I know how old she was, she was already limping a little when I left her at the groomer. Now she was nearly dragging her feet.


It was heartbreaking, to say the least. My good groomer has put her on a diet for the last few days owing to her joints/arthritis problem. She looked forlorn and like a reluctant Weight Watchers candidate finishing her ordeal.

I guess the reason why pet owners feel so attached to their pets is that they have "no one else to depend on". If you chose to have a pet, that is your responsibility. Like a petulant child, there will be times you want to just give up that petulant child. Once you get past that, you realize that their happiness and sorrows are directly correlated to you. They literally have no one else. No distant relatives to call, no country to migrate to.

What is more galling is the fact that your pets have a short term memory, or rather, a very forgiving nature. You can be angry at them one day, and they will forget about it soon enough. Next day when you are still fuming, they will greet you as if nothing has happened. Who does that? Which human can do that?

Their magnanimous character causes us to rethink our own limited self, our selfish ways. Why we are sometimes NOT FIT to be even a dog. The death of a pet can hurt as much as the loss of a close relative or friend. It is common for humans to have conflicts with family members over religion, money, politics, relationship strains and so forth—conflicts that may create emotional distance between them. Humans and pets do not have these types of conflicts—pets are 100 percent dependent on their human companion.

Never has something so wrong been uttered. If you ever have had a pet, that is smackable. 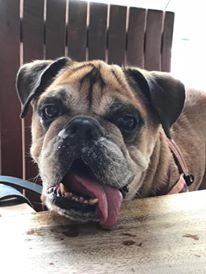 Now, that is not the real focus of this posting. I was on a 12 day trip to Sydney with my mum, who will be 80 next year. I might not win the best son award but I pass with 70/100 I think. Every other year I will take my mum somewhere. My other siblings will do likewise.

My dog's situation led me to reconsider my relations with my mum. As she lives in Ipoh (and me in KL), I do not see her often enough. I realized that as much as I try to be patient, I am a lot less patient with my mum.

The KLIA2 walk from immigration gates to departure gates is a lot like a half marathon. I think I asked her to hurry up twice, it soon dawned upon me that that may be as fast as she can walk nowadays.

I kid you not, she wrongly entered her passport 5 times. I was exasperated after the third time. I said look at the screen, it was so clear the instructions. No use. I had to do it manually for her. She said, she doesn't know why she could not comprehend the instructions on the screen. My exasperation was not so much anger but rather the realisation that my mum is getting old. My exasperation was tinged with a lot of desperation.

My mum and Dali are both getting very old. I guess we will all go through these stages. It is not fun ... but it is necessary. Love has to come hand in hand with responsibility. I don;t know why my tears are rolling down my cheeks as I am writing this.

p/s Dali is well after some painkiller, and her diet will have glucosamine and fish oil every day from now on...
http://malaysiafinance.blogspot.com/2019/08/slow.html
malaysiafinance
Next article Next Post
Previous article Previous Post
‹ Newer Post Older Post › Home