Is SOLARVEST worth subscribing ? (The only analysis you need) 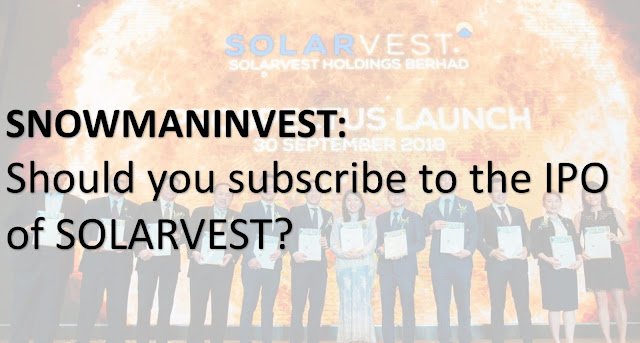 This would be my virgin post in English, I have read some analysis on the upcoming IPO of Solarvest, but so far that has not been any analysis that I agree with as most of them are incomplete and very superficial. So, I decide to write up my two cents on this upcoming IPO (Solarvest) and renewable energy industry.

Image obtained from KLSE screener
In recent 2020 budget announced by the government, with the announcement of the new Green Investment Tax Allowance (GITA) and Green Income Tax Exemption (GITE) receiving an extension to year 2023, the equity market are optimistic with the prospects of the Solar stocks and the tax exemption they may enjoy in the coming fiscal year. Listed companies involving with the solar panel installation business have responded optimistically with their share price rising up to 10% after the good news being announced (Greatech and Cypark) . 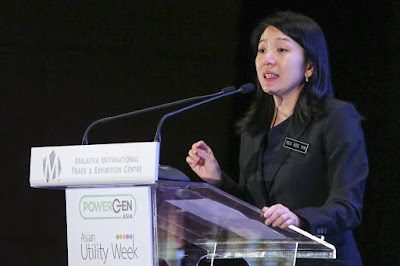 Image obtained from MalayMail ,source: https://www.malaymail.com/news/malaysia/2019/09/03/yeo-malaysia-aiming-for-20pc-renewable-energy-use-by-2025/1786768
I was not surprise with the introduction of the existing policy being extended and new tax incentives up to 70% being given as Energy, Science, Technology, Environment and Climate Change Minister Yeo Bee Yin has already provide some "tips" or forewarned a month before the announcement of budget 2020. In September, Yeo announced in the public that the government will announce a long-term Renewable Energy policy — Malaysia Energy Supply Industry 2.0 (MESI 2.0) — which seeks to implement at least 20% of renewable energy generation in six year time frame.
Investors might be pondering why are the price-to-earnings (PE) valuation given to Greatec is much higher compare to Cypark.
Greatec is currently trading at P/E multiple of 26 while Cypark trading only at 9.14 which is almost one-third of Greatec's valuation. If you look into the IPO prospectus of Greatec, you might notice that Greatec is not an energy company but an automation-solutions offering company, the share price of Greatec has been performing incredibly before the announcement of budget 2020. Many retail investors has misinterpretation that Greatec is a solar company is not true, the connection that Greatec has with Solar industry is that its major customer — First Solar — accounted 87.61% of the total revenue. 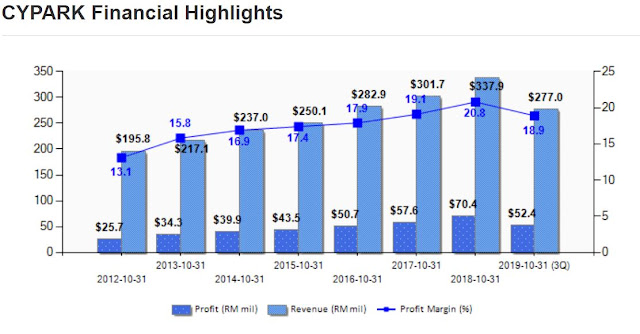 Cypark, in which its Renewable Energy business accounted for more than 50% of its total revenue is only trading at 1/3 of Greatech P/E. Why the market isn't fair? In my opinion, this is probably due to the competitive environment that solar industry faced:
1. Oversupply: Increment of solar companies bidding for limited solar projects.
2. Price War: Companies offering cheap installation price of solar panel compromising the profitability for the sake of getting the job.
3. Low efficiency: Coal power operates at 70-80% capacity compare to the pity Solar power at only 15-20% capacity. This is not economically beneficial for a country like Malaysia.
So, should you subscribe to the IPO of solarvest? In my opinion, the short and mid-term performance of the price and sentiment of Solar Industry might be positive, but the fundamental of the Solar Industry might not be sustainable in the long-term. Solarvest will be trading at P/E of 12.5 with ROE of 17.43%, which is slightly higher than the current benchmark of the industry. From the share capital perspective, there will be 390mil shares after IPO compare to 467mil of CYPARK, 626mil of Greatec, 2253mil of PUC, 386mil of VSOLAR.
In conclusion,the policy announced by government might drives the optimistic sentiment for the industry, encouraging more retail investors to subscribe for Solarvest causing the IPO to be oversubscribed. Limited shares availability compare to other companies might cause Solarvest to be scarce and perform well on the trading day.

In the short run, the market doesn't care about the fundamental of the company. Therefore, all the positive news and policy might drive up the price of the industry.
DISCLAIMER:
website and the information contained herein is not intended to be a source of advice or credit analysis with respect to the material presented, and the information and/or documents contained in this website do not constitute investment advice
http://wislearninvestology.blogspot.com/2019/10/is-solarvest-worth-subscribing-only.html
SOLARwislearninvestology
Next article Next Post
Previous article Previous Post
‹ Newer Post Older Post › Home