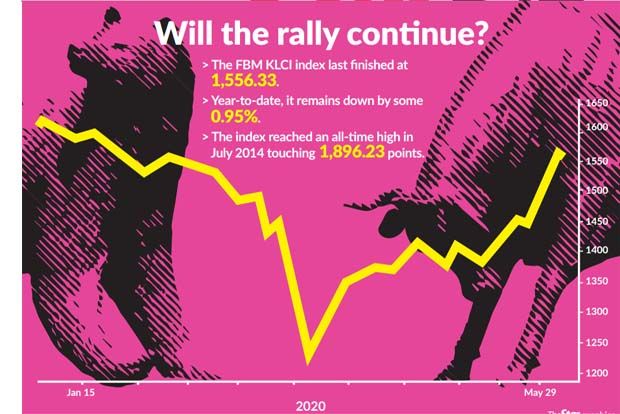 PETALING JAYA: Malaysia’s stock market is rallying led by a surge in domestic liquidity and not fundamentals but this is likely to continue for now.

Anand who addressed questions by StarBiz after speaking at Maybank Kim Eng’s Invest Asean 2020 conference which was held virtually last week, pointed out that net foreign flow into the local stock market remained negative, with foreigners selling off RM3bil worth of local stocks in May, and over RM13bil worth since the beginning of this year.

Additionally, corporate earnings projections continue to be revised lower, he said following the release of first quarter results by local firms over the last few weeks.

“Yes, technically we are in a bull market, which is a 20% recovery from a market low, but we believe this rally is being primarily led by a surge in domestic liquidity, especially retail liquidity rather than fundamentals, ” he said.

Having said that, he believes domestic liquidity which is ample, spurred by an environment of low interest rates or a lack of alternative investment choices, can continue to support the market.

But “we would not be chasing, ” he said.

“Retail sentiment can easily turn, and the worst of the earnings and non performing loans/bankruptcy newsflow is still ahead of us, ” he cautioned.

He added that Malaysia remains among the more expensive markets in Asean, now trading at almost 18 times its 12-months forward earnings.

“It is difficult to expect a return of foreign buying of any size given the combination of stretched market valuations, the economy’s gearing into the highly-volatile commodities sector, the government’s weak fiscal position (cannot stimulate meaningfully) and extended political uncertainties due to recent events relating to the change in government.”

“So, Malaysia will struggle to be attractive to outside investors, ” Anand said.

To be sure, trading values and volumes have soared to record highs in recent weeks as investors snapped up stocks of local glove makers, selected healthcare, IT and consumer firms and everything else in between perceived to benefit from the current Coronavirus pandemic.

Shrugging off concerns about the slowdown of the local and global economy, investors chasing the market have pushed the local index, long thought off as a laggard, to a level that is now only a shade below its recent high recorded in January.

“We remain weighted in defensives, especially high-conviction dividend yield stocks (primarily utilities, REITs and selective banks as well as exporters like gloves, tech and petrochemicals which can leverage into global, rather than just local, demand recovery, ” Anand said.

Like most, he is “negative” on the aviation and consumer discretionary sectors where “demand recovery is particularly challenging.”

Economic-wise, he said he expected the economic recovery for Malaysia, to be U-shaped rather than V-shaped.

“We are expecting gross domestic product (GDP) to shrink 3.3% year-on-year this year, which is worse than Bank Negara’s forecast growth range of +0.5% to -2%.”

He noted it would take time for the economy to gain momentum given the staggered approach to easing the movement control order (MCO), as well as, the fact that “traditional anchors” of the Malaysian economy such as tourism and oil & gas are facing significant structural uncertainties.

“Furthermore, the government’s stretched fiscal position means it is constrained in terms of potential stimulus spending even as cash-strapped consumers facing employment risks prefer to rebuild financial buffers/ reserves rather than spend.”

Malaysia, like many other countries has seen its economy impacted as a result of the Coronavirus pandemic which initiated the implementation of the local version of a partial lockdown – the MCO – in March.

This had practically shut down most businesses and caused consumer sentiment to be hammered.

While there has since been easing of the MCO with many economic sectors now allowed to operate, the effects are likely to linger for some time to come.