Tech stocks valuations soar above five-year average — are they expensive?

KUALA LUMPUR (June 24): The technology index is currently trading at 34.34 price-earnings (PE) multiple, which is above the five-year average of 25.7 times.

The price-earnings (P/E) valuation of the tech stocks, which are the well sought after ones beside the glove counters, has gone up in a V-shape trend in tandem with the strong rebound on their share prices.

Interestingly, other than running into a V-shape recovery in share prices, most tech stocks had staged V-shape rebounds in their PE multiples.

Among the star performers, UWC Bhd and Greatech Technology Bhd, whose share prices have soared 72.9% and 59.2% year to date respectively, are currently trading at PE multiples of 49.6 and 34.9 times respectively.

The two companies are currently trading significantly higher than the PE multiples of 27.7 and 21.2 times at the beginning of the year, indicating strong optimism assumed by the investing fraternity.

The rally is across the board including the big boys, for instance Vitrox Corp Bhd (trading at PE 55.8 times), Pentamaster Corp Bhd (PE: 25.9 times) and Frontken Corp Bhd (34.3 times), which are higher than their PE multiple of 25 times to 46 times at the start of the year. 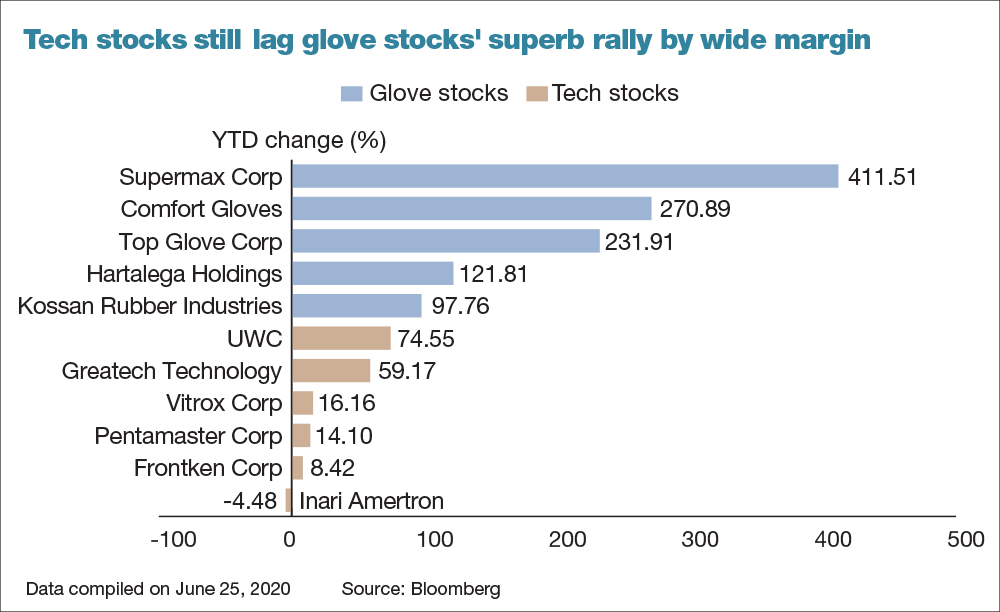 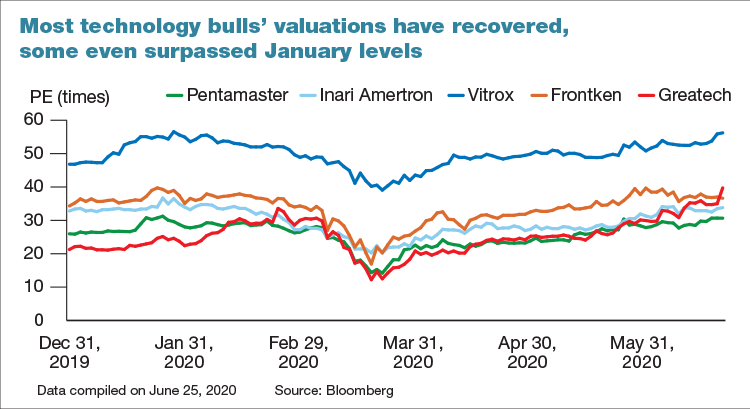 The proxies to the Apple supply chain such as Inari Amerton (PE: 33.5 times), Globetronics Technology (28.2 times) and Malaysian Pacific Industries (15.6 times), have seen their PE multiples going up substantially compared with the level in January.

The main fuel to the tech rally is mainly the expectation of the powerful deployment of new technologies in different gadgets and devices in our daily life. And that gives rise to anticipated exponential earnings growth. For the veteran investors, this might remind them of the dotcom boom.

“I would advise investors to consider putting their bets on tech stocks that are still trading at reasonable valuations, so that it could be judged as laggards, for catch-up play,” he said

In Lau’s opinion, a reasonable valuation for Malaysia tech stocks would be the sub-30 PE multiple level.
Beware of frothy valuations

Lim Tze Cheng, head of research at EquitiesTracker Holdings Bhd told theedgemarkets that he believes as long as the stock’s valuations are justifiable with growth, there could still be some upside room in share prices.

“In my opinion, a PE multiple of less than 30 in tech stocks is considered reasonable, but I would advise caution of applying a blanket approach in valuing all tech stocks, as most of them are operating in different parts of the supply chain,” Lim said.

As some have pointed out using price-earnings growth (PEG) ratio in measuring high-growth companies, Lim however expressed doubt over the metric, as his view is that the metric is erroneous in nature.

“It is misleading to combine company valuations and growth rate in a single metric.

“PEG is adopted when analysts cannot justify the high valuations of a certain stock, and still would like to make a buy recommendation,” he explained.

Citing an example of two tech stocks that have similar growth prospects, Lim said that it is more logical to opt for one that is currently trading at a lower PE ratio. “Valuations have to be justified by growth,” he said.