On June 28, 2020
The "Greatest Bear Market Rallies Of All Time", And Why This One Is Ending

After two consecutive weeks of declines in the Fed's balance sheet, the stock market has started to look especially wobbly, and after several days of steep declines, all June gains have vaporized. 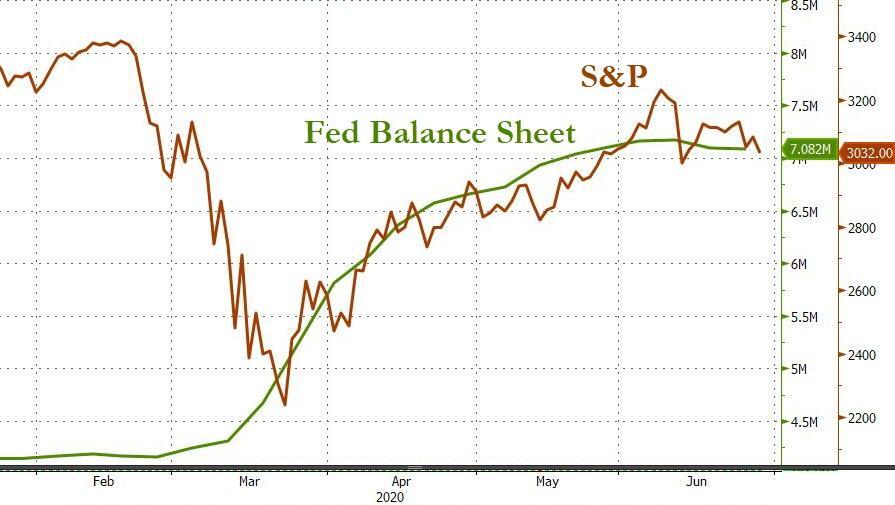 Of course correlation isn't causation, and the prevailing narrative is that the market weakness has been due to a spike in coronavirus cases across sunbelt states and fears that the V-shaped recovery is not coming, although as we have repeatedly said, the Fed will urgently need to expand its QE which is now running at "only" $80BN per month for TSYs, an amount that will be insufficient to monetize the flood of new debt in the coming years. To do that, however, the Fed needs a "shock" pretext to resume aggressive balance sheet expansion and a "second wave" is just that.

So while we wait for the media narrative to "confirm" that the next escalation in the pandemic has arrived and is forcing states to resume shutdowns, it is hardly a surprise that on Wall Street strategists are taking a step back and after bearish projections virtually disappeared in the past month, discussions of a bear market rally are once again front and center with BofA's Michael Hartnett taking the lead. According to the BofA CIO, while Q2 is on pace to be the best quarter for the S&P500 and oil in 50 years...

To put it in context, Hartnett shows that the current rebound has largely been following the trajectory of the three "greatest bear market rallies of all-time" (1929, 1938, 1974), which would put the S&P at 3300-3600 sometime between Aug & Jan'21, but what follows would be a far more painful move lower, as was the case after all these bear market rallies fizzled resulting in lower lows. 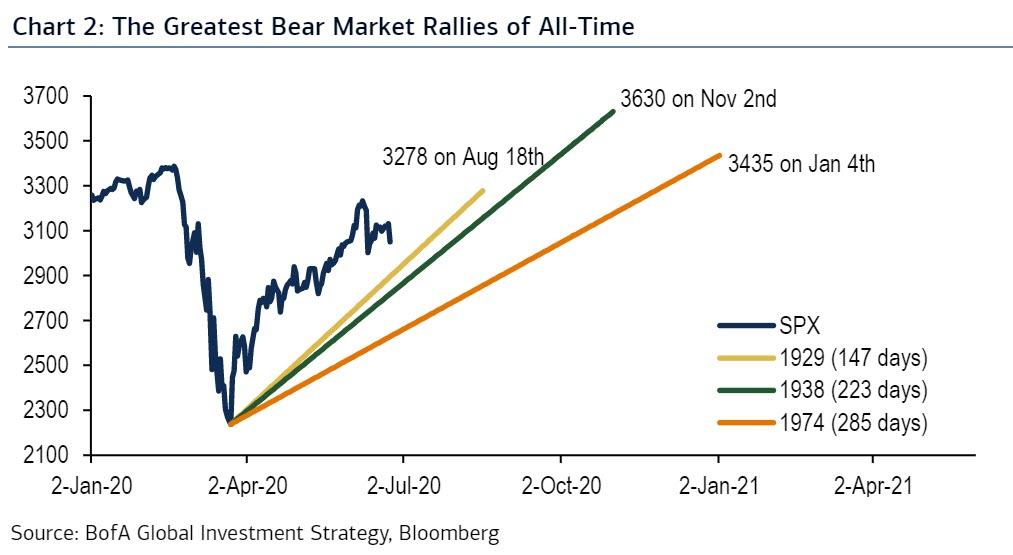 Hartnett is not the only one trying to predict how the bear market rally dies. Leuthold Group's CIO, Doug Ramsey, who in March told his clients to sit out what's coming and thus missed the $10 trillion surge in market cap, has a message: it ain’t over yet.

"The bulls could be proved right in that the March 23rd low holds, but you could lose a lot of money in a drawdown here," said the Leuthold chief investment officer. "You could still very easily have a drop of 20% from the peak we made on June 8th. Very easily."

As Bloomberg notes, "the warning reflects a wider schism on Wall Street these days. Many of the bears whose jaws dropped over the resiliency of stocks remain steadfastly skeptical, awaiting the moment of vindication. Meanwhile, early believers are running victory laps, doubling down on the rally on the theory skeptics will have to capitulate and stimulus will continue to flow."

But what may be the single most beneficial aspect of the recent Fed-fueled ramp which saw the central bank inject or backstop nearly $8 trillion (and counting), is that technical analysis has finally been thrown out of the window, and "by now, everyone’s aware there’s no moment of the past that can be used as a template to tell which way stocks will lurch next."