Below is the revenue and operating margin of ARANK.

ARANK revenue had slow down for the past five year compare to the previous 10 years. Despite lower revenue ARANK operating margin had increase from around 2.5 % before 2016 to 3.5 % in 2019.

1) Interest Coverage Ratio
Interest coverage ratio measure how capable the company pay off the existing debt. With an interest coverage ratio above one mean the earnings before interest & tax (EBIT) is able to pay of the full amount of the financial cost of the year.
ARANK had interest coverage ratio more than one for the past 10 years. In 2017 ARANK interest coverage ratio is at 35 which is the highest and drop to 12 in 2019.
2) Cash Ratio
As cash is the most liquid assets of the company, cash ratio is use to determine company ability to pay off short term liabilities using cash. Cash ratio above one indicates that company able to settle all current liabilities using available cash.
ARANK had low cash ratio from 2010 to 2018, however in 2019 the cash ratio is above 1 for the first time over the last ten years.
3) Current Ratio
Current ratio measures ability of the company to pay off short term obligation (current liabilities). Current ratio above one means the company able to pay off the current liabilities with current asset.
Despite low cash ratio, ARANK current ratio is above from 2011 onward.
Turnover in Days
Let look into three types of turn over as follow:
1)  Inventory Turnover (Blue Line)
2)  Trade Receivables Turnover (Red Line)
3)  Trade Payable Turnover (Green Line) 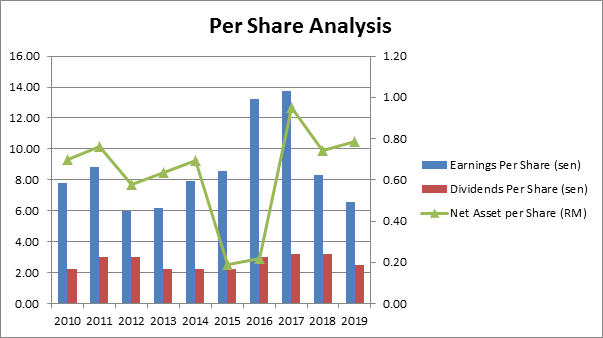 1)  Earnings per share (sen) (Blue Bar)
2)  Dividend per share (sen) (Red Bar)
3)  Net total assets per share (Green Line)
1)  Earnings per share
Other thank year 2016 and year 2017 ARANK had quite consistence earning per share around 8 sen.
2)  Dividends per share
ARANK had consistence dividend per year of 3 sen. ARANK had issue bonus shares twice over the past 10 years. 1:2 Bonus in year 2012 and 2:5 bonus in year 2019.
3)  Net total assets per share
There is a significant drop in net asset per share in 2016 and 2017 due to impaired the goodwill of Hong Lee Group Sdn Bhd in 2016 and disposal of Hong Lee Group Sdn Bhd in 2017.
Director’s Remuneration
Some company paid high remuneration to director despite low profit. Let see how much is ARANK director’s remuneration in comparison to staff fee and operating profit.

There is slightly higher director remuneration expense in 2016 and 2017 where the nett profit of the companies is high.
Datuk Leow Chong Hwa, major shareholder of ARANK is also major shareholder of LBALUM and City Data Limited via his spouse.
ESOS and Warrant
Five years ESOS from 27 August 2018 until 26 August 2023 are granted to the eligible employees and director at 0.65.
As of 31st July 2019 ARANK granted 10,492,400 options to eligible director and employee. The option price had adjusted to 0.46 due to bonus issue on 18 January 2019.
Material Ligation
ARANK had no material ligation as of 30th April 2020.
Return on Equity
Return of equity can be calculated through Du Point Analysis which uses:

ARANK equity multiplier had decrease over the period from 2010 to 2019. While asset turnover and net profit margin remain almost constant except in 2016 and 2017 which see increase in net profit margin which increase the return on equity to above 14 %. 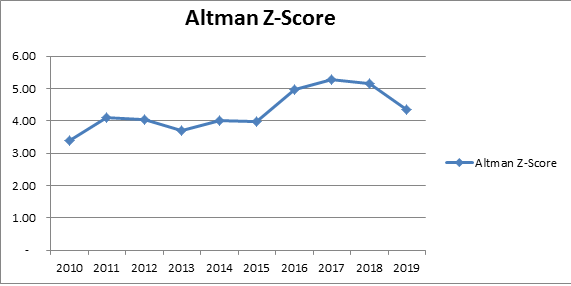