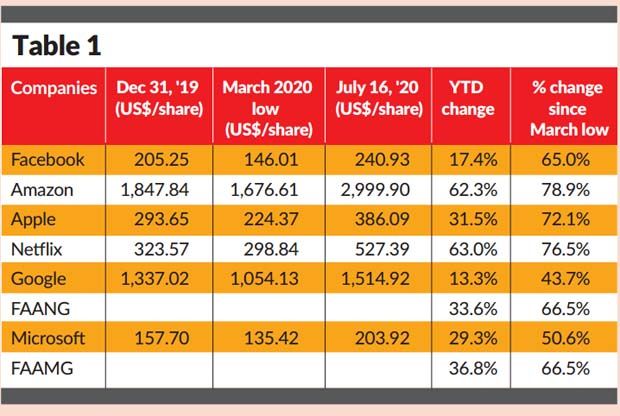 ONE of the strongest outperformances in the US market today is the technology sector and a recent chart showed how the “FAAMG” stocks have performed so well despite the rich valuations., trading at just below 30x price-to-earnings (PER) ratio.

The original 2013 acronym evolved at a later stage, four years later, to “FAANG”. This incorporated Apple (the second “A”) in the acronym. Although Google has since changed its name to Alphabet, the original “G” is still attached to both the “FAAMG’ and “FAANG” acronyms. Table 1 summarises the performance of FAANG and FAAMG stocks year-to-date.

Whether it is the performance of FAANG or FAAMG, all tech stocks have been enjoying spectacular runs this year and from the year’s low, the group of stocks are also up by about two-thirds in value. Another spectacular performance, which has been much talked about is by Tesla. The share price today makes the tech-based automotive company the largest among all with market capitalisation of more than US$278bil. Tesla’s share price is up 258% year-to-date and some 315% from the March low of US$361.22 per share.

Perhaps it is about time for someone to re-invent the acronym FAANG and FAAMG to include Tesla with a new abbreviation of FAANGT or FAAMGT.

While the US has its acronym based spectacular stocks, Malaysia too has one, but no one seems to have named them just yet. While some call them the Four Heavenly Kings due to the mind-blogging multi-beggar gains, this column would like to coin them with the abbreviation THKS. The four companies are of course Top Glove (T), Hartalega (H), Kossan Rubber (K) and Supermax (S). Thanks to THKS, Malaysia too has its very own acronym of spectacular stock price performance. Table 2 summarises the performance of Malaysia’s THKS stocks year-to-date and up to yesterday’s close. Except for Supermax, which is trading near it’s intra-day all-time-high on July 14, the share prices of the other three companies are now between 9% and 10% from their respective record highs.

As a collective group, THKS has multiplied in value by spectacular fashion with total market capitalisation of the four stocks rising from RM37.7bil as at end of last year to the current level of RM161.3bil, a more than three-fold increase year-to-date. We all know the reasons for this as the glove makers are finally enjoying the fruits of their labour as demand has soared in the wake of Covid-19 while supply remains tight due to limitation to output for the time being.

For investors who have benefited from this amazing run, (g)love story has not ended as investors are riding on a once-in-a-lifetime opportunity. Many of us have read all the newspaper articles as well as analyst commentaries as to why this rally will be sustained for a foreseeable future given the supply/demand dynamics as well as rising average selling prices (ASPs) over the past few months, which has resulted in spot glove prices going up by 2-3 folds or even more. But reality will set in, sooner or later, that this is unsustainable.

The reason is pretty simple. Gloves are like a commodity and not only these four companies are ramping up demand, so are others, both within and outside Malaysia. On top of it, we have new players coming to market to enjoy this super-normal EBITDA margin period, which is expected to rise from the mid-20% to as high as 40%. Some analysts are even forecasting margins of in excess of 50%, driven by purely higher ASPs.

According to one brokerage reports, demand for gloves is expected to rise by a compounded annual growth rate (CAGR) of 13% from 2019 to 2022 and an increase of 63% from the 2019 base level. Supply is expected to match this demand growth with a CAGR of 12.2% during the same period as manufacturers raise their output capacity by 58% from its end-2019 capacity level to the end of 2022.

As demand is expected to remain well above supply, market analysts are also assuming that ASPs will continue to rise in the years ahead. From an expected price increase of 25%-30% this year, analysts are forecasting ASPs to increase by 10%-15% in 2021 and a further 5%-10% in 2022. Effectively, prices are expected to rise by between 44% and 65% by 2022 from the level they were in 2019.

With such a bullish scenario, it is no wonder market is extremely excited about glove stocks prospects as all factors are working for glove makers. But are these valuations justified? Table 3 summarises current valuation matrix based on latest target prices among analysts that were update over the past two weeks alone as well as forward PER multiples.

The above valuations are after taking into consideration the demand and supply factors as well as latest euphoria on rising ASPs. Question is, as THKS on a weighted average basis is already trading at 32 times calendar year 2021 forward earnings, which is the year earnings for glove makers is already expected to peak, how far more can these glove makers continue to defy the odds in terms of share prices as they are well beyond being overvalued?

As it is, Supermax is now trading well above consensus fair value while Kossan is at market’s consensus target price. Only Hartalega and Top Glove seems attractive as they have between 12% and 22% upside as per Table 3.

At the same time, we are also seeing rapid and quick earnings upgrades among brokers, mainly on the back of higher and higher ASPs. As valuations become stretched, some analysts have started to mellow down their expected target PER as it is clearly unreasonable to expect peak earnings in 2021 to be sustainable. The shape of rubber glove companies’ earnings is expected to be that of a reverse “V” as earnings seen to normalise by 2022 calendar year based on expected normalisation of demand-supply equation as well as likelihood of a vaccine to be found by next year.

Nevertheless, analysts remain optimistic on glove sector expected earnings as one analyst using a discounted cash flow model (DCF) even expects free cash flows of THKS to increase by as much as 8.8% CAGR from the high base in 2021/22 and right up to the year 2030/31, to derive a fair value. Worse, the analyst is also assigning a very optimistic assumption of terminal growth in these DCF models as the resulting value of terminal growth itself is about 72% of total enterprise value of the four companies.

The reason – the analyst is implying a terminal growth rate of 4% on future cash flow beyond the DCF period of 2030/2031. Incidentally, if one were to adjust this terminal growth rate, let’s say to 3% or even 2% (which is more reasonable), the value of companies on a DCF basis drops between 30% and 37% (for 3% terminal value) and between 51% and 60% (for 2% terminal rate). Clearly, the application of this terminal rate in the DCF valuation itself is a huge determining factor in arriving at a fair value of the company.

Other analysts are still sticking to the old PER method of valuations but the irony of it is that the PER benchmark varies between one analyst to another. Some used a standard multiple like 20-25 times PER on 2021 earnings and of course once the target price is achieved, analysts begin assigning a +1 to +1.5 or +2 standard deviation to arrive at a higher fair value, just to justify a buy call. So we have situations whereby some fair values are based on PER multiple to as high as even close to 50 times PER.

The rush to raise target prices for glove stocks is clearly not sustainable and illogical to be carried away in valuation matrix just because the share price has shot-up beyond the fair value of the analysts. Are analysts chasing stock price or are they still fundamentally driven in their valuation parameters? Only time will tell. For now the Malaysian glove story is a love story hard to ignore, especially for those who are riding on this super-cycle once-in-a-lifetime rally.

The views expressed here are the writer’s own.