A company in focus that is likely to see investor interest or a potential corporate exercise in the coming months is the loss-making Saudee Group Bhd.
For some background, Saudee is a smallish Main Market-listed company, with a market cap of RM76.25mil. This consists of 146.64 million shares at its last price of 52sen (Aug 14). 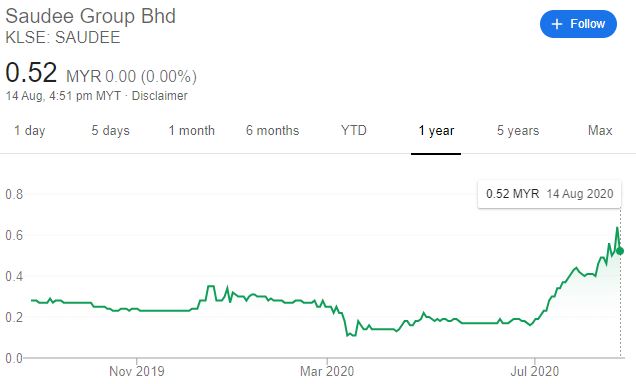 The company has been loss making over the last four financial years.

Suddenly, major shareholding changes took place last week. . . .
1. Out of the blue on Aug 11, an announcement appeared on Bursa Malaysia that Tan Khang Khim, the major shareholder of Saudee has disposed off 59.1 million shares or a 40.2% in the company via open market and direct business transaction (DBT) deals.
To be exact, some 53.81 million shares were crossed via DBT at a price of 40 sen.
Thus, Tan is no longer a substantial shareholder of the company.
2. Then on Aug 13, what was more shocking was the resignation of Saudee's executive chairman Khoo Lay Tatt on Aug 13.
In the filing to Bursa, Khoo stated that he was resigning from his position due to a 'lost of mandate to lead and guide the company due to change of major shareholder'.
This move shocked market players.
Khoo has made a name in corporate circles mainly for his success in steering Dufu Technology Corp Bhd to profitability and subsequently being known as THE stock to invest in.
Mention Dufu, and most people think of its north-only share price movement, which is further backed by double digit compounded growth rate for its profits.
This was one reason why Saudee's share price rallied three years ago when Khoo first took up the executive chairman position in the company.
Is it game over then?
Perhaps not.

Fintec became the new substantial shareholder via the acquisition of Saudee shares through a DBT via its wholly-owned subsidiary, Asiabio Capital Sdn. Bhd.
For now, Fintec holds 31.54 million shares or a 21.55% stake in Saudee.
On Aug 11, Mak Siew Wei was appointed as executive director of the company. Credit: TheEdge
Mak is also a director in:
1. AT Systematization Berhad
2. Green Ocean Corporation Berhad
3. Advance Information Marketing Berhad
Mak's entry into those companies, have seen new business ventures being announced followed by big movements in their share prices.
This could be an indication of what is to come for Saudee.

Why do these new developments make Saudee interesting?
First of all, the DBT involving Tan's 53.8 million shares was done at a price of 40 sen.
Meanwhile, the open market disposal of Khoo's 20 million shares were done at 55 sen.
This means that the new shareholders cost would rougly be at 44 sen, if not higher.
Why is he paying 44 sen for a loss making and debt laden company?
As of July 31, 2020, the company was in a negative cash position of RM3.99mil.
Furthermore, the company has long term debts of RM4.98mil and short term debts of RM22.01mil.
This means the company has total debts of RM26.99mil.
Sources close to the new major shareholders say the first thing on the agenda is to pare down Saudee's huge debt as soon as possible.
"The new major shareholders want Saudee to be a zero gearing company. That's the priority before thinking about any business expansion. This will save the company lots in terest payments," said the source.
Once that is done, then the new shareholders have plans to turn the business around. They see potential in the food business, and furthermore, Saudee has already secured a few new export markets.
"With an injection of funds, Saudee's Sungai Petani plant can be ramped up, and perhaps by next year, the company will start seeing some contributions from the export markets," said the source.

Worst is Over
On a brighter note, it does appear as if the worst is over for the company.
Saudee had embarked on a huge kitchen sinking exercise, which saw the company record a loss of RM27.78mil for the nine month period to July 31, 2020.
For the third quarter alone, Saudee recorded net losses of RM19.68mil on the back of revenue of RM19.47mil.
In its filing to Bursa, Saudee said that the losses incurred in the third quarter were mainly due to the provision of allowances for slow moving inventories and the write-off of inventories amounting to RM17.40mil and RM25.40mil respectively.
Thus this also implies that the new shareholders are coming in at the tail end of Saudee's impairment and write-off exercise.
With most of the cleanup completed, it will be interesting to see whether Saudee on its own, will be able to turnaround in the coming fourth quarter results.

Moving forward
As it eyes to recover from its losses in the previous years, Saudee aims to transform itself to become the premium food manufacturer in Malaysia and in the Southeast Asian region.
According to its website, the Group is looking at:-