KUALA LUMPUR (Oct 2): The third quarter (3Q) of this year has seen many record-breaking numbers.

Rubber glove counters, for one, reported their highest ever earnings, while trading volume on Bursa Malaysia swelled to a record high. The number of COVID-19 infections worldwide, sadly, also reached a new peak.

Here are eight charts that will show you the highlights of what have been a most eventful 3Q of 2020.

COVID-19 showing no signs of slowdown

The number of COVID-19 cases around the world continued to rise in 3Q, showing no signs of slowing down. As at Sept 30, the number of confirmed cases worldwide stood at 33.98 million, up 219% since the start of the quarter, while the number of deaths has almost doubled to one million. The US has the highest number of cases at 7.45 million, followed by India (6.32 million cases) and Brazil (4.81 million cases). These three countries also suffered from the most COVID-19 deaths, with their collective death tolls accounting for 45% of the global total. 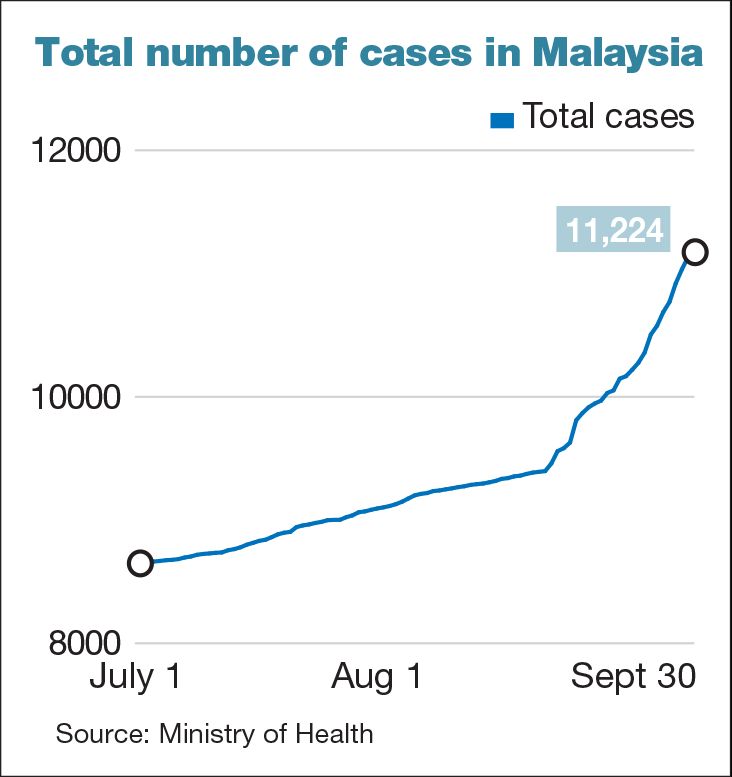 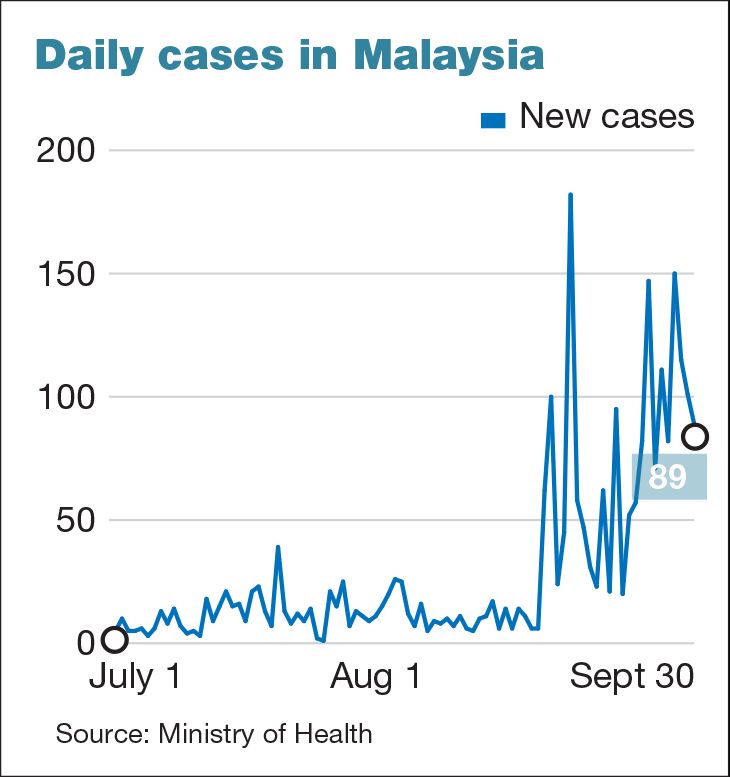 In Malaysia, the number of new confirmed cases dropped to single-digit in July and August, but spiked to over 100 in September. Consequently, the number of active cases, which rose at a faster pace towards the end of 3Q, breached the 1,000 mark on Sept 28. The total number of confirmed cases has gone up 30% during the quarter to 11,224 as at Sept 30.

The pandemic has resulted in higher usage of rubber gloves, which in turn translated into higher profits for rubber glove manufacturers during the quarter. Top Glove Corp Bhd led the pack with a record profit of RM1.3 billion for its fourth quarter ended Aug 31, 2020 (4QFY20), almost 18 times the RM74.17 million it posted a year earlier.

However, Top Glove’s record high profit failed to lift its share price as it was likely already priced in by the market. That said, the counter still gained 479% during the quarter to close at RM8.30 on Sept 30. 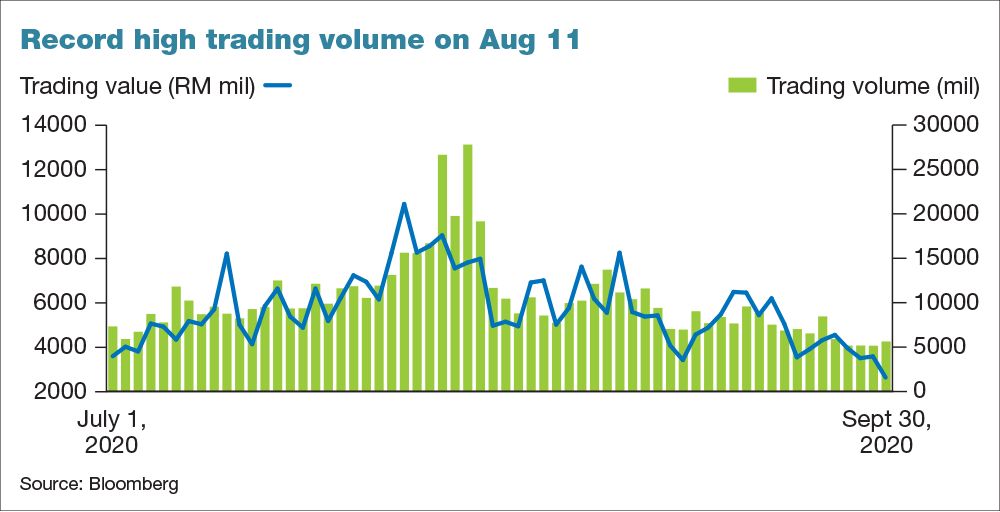 Trading volume on Bursa Malaysia surged to new high of 27.8 billion shares on Aug 11, while trading value reached a fresh peak of RM10.5 billion on Aug 4 amid the continued craze for rubber glove stocks, and the emergence of a penny stock fever that had at least doubled the share prices of many loss-making companies in a single day.

However, trading volume subsequently dropped to 5.6 million shares at the end of the quarter, down 80% from the peak. 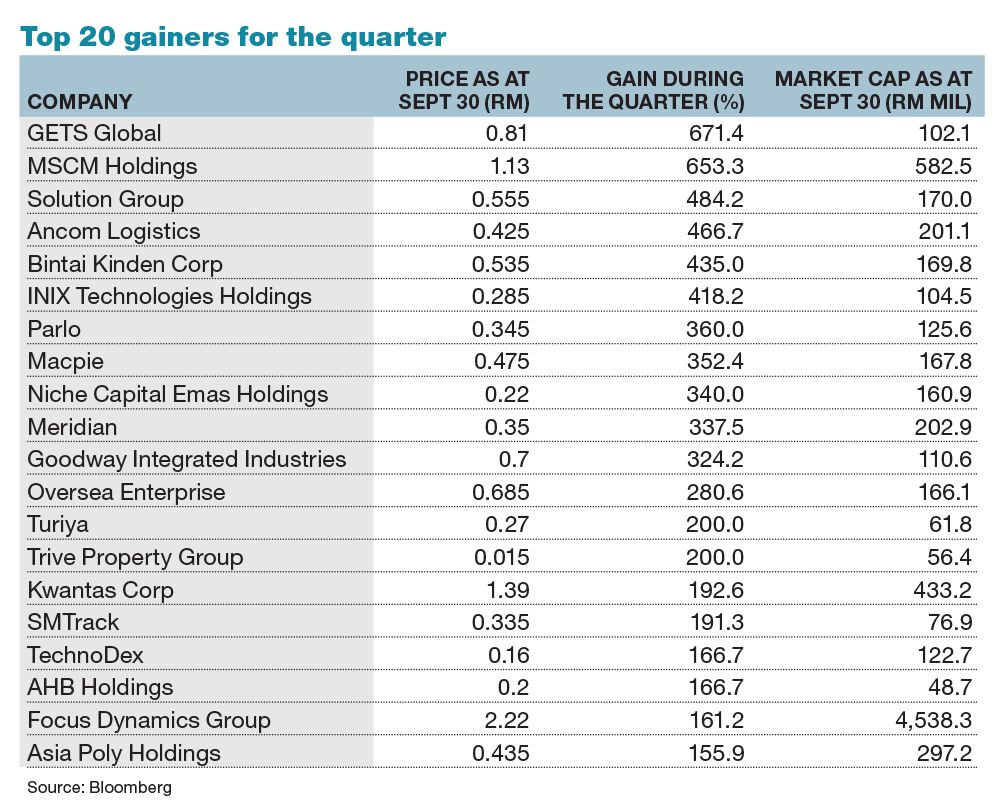 The optimism in the counter was driven by its announcement of a planned diversification into the rubber glove business. The company plans to construct a glove manufacturing plant with 12 glove dipping lines, which is expected to produce 4.14 billion pieces of gloves a year.

The second top gainer was IT solutions provider MSCM Holdings Bhd, which also announced its plan to venture into nitrile glove production, in a bid to turn around its financial performance. The counter gained 653% in 3Q to close at RM1.13.

Inix Technologies Bhd, whose share price soared 418% during the quarter, also revealed its plans to set up a rubber glove business.

Bank Negara Malaysia (BNM) paused its rate-cutting spree in its September Monetary Policy Committee (MPC) meeting, which came as a surprise to many.

The Central Bank had been cutting rates in the past four consecutive MPC meetings since the start of the year, bringing the overnight policy rate down by 125 basis points (bps) to a record low of 1.75%. 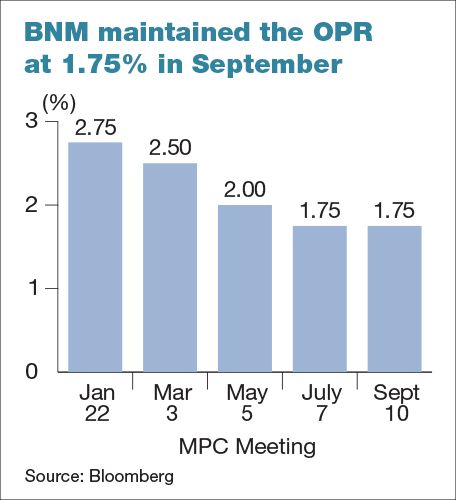 Prior the MPC meeting in September, economists were divided in their forecasts; some were expecting the Central Bank to slash the OPR further before the year ends.

However, many of them changed their forecasts after the relative optimism expressed by Bank Negara on the recovery of the domestic and global economies. The market consensus view is that the rate may be kept at 1.75% — at least until year-end — barring unforeseen circumstances.