A few hours ago, a friend updated me on this information relating to KRONOLOGI (Kronologi Asia Berhad), a company I’ve had at the back of my mind for some time.

They did not disclose the identity of the Chinese entity. But this sure sounds like Baidu or Alibaba.

As im not done with my analysis, i will only provide a summary for now.

They provide both the hardware (servers etc) and the software needed to retrieve, compute, store, archive and backup data for medium sized companies, or companies who are not keen on taking on the large minimum costs that is charged by the top tier companies like Oracle, as well as provide yearly maintenance and service.

In the last few years, they’ve started to also offer a PAAS model, where you pay as you use, based on your capacity. This is because many customers do not want to have physical servers in their offices, nor do they want to incur the capex cost.

However, this is very good for KRONOLOGI as it results in much larger profits over the long run. There is a reason why Microsoft prefers for people to sign up for a Office 365 subscription versus selling you Microsoft Office outright.

Unlike most companies listed in Malaysia, KRONOLOGI makes use of the benefits of being publicly listed, that is to use their shares to buy other companies at reasonable prices, allowing them to grow their reach and capabilities much faster.

Over the years, they have acquired these companies using a mixture of cash and shares.

Valuation: RM60k profit (Profit grew 600% to RM375k in 2019. This indicates contracts already baked in upon acquisition, just not yet materialized)

The biggest concern of these acquisitions is that because they (other than the Sands acquisition) are often related or owned by the Directors.

This was due to Kronologi being listed/born on the Malaysian public market in in a different way from most. In their case, a holding company was first created, and their then largest company injected into the holding company to be listed.

In the subsequent years, the management wanted to consolidate all their companies into the public company, and so we have the above acquisitions. However, as we can see here, post acquisitions and consolidation of their businesses, the Revenue, Profit and Estimated Operating Owners Earnings have grown consistently every year.

Their profit in 2020 fell mainly due to one of their larger customers being from one of the largest Airports in Asia (with this China contract, this point is moot).

So, at minimum, we can say that the probability that acquisitions are truly accretive in terms of reach and capabilities is quite high.

And to be frank, the valuations they paid to acquire these companies is more than fair.

Where else do you get to acquire companies in fast growing industries like datacentres for 5-12 times earnings?

The Proof -  The Alibaba (or Baidu)

Having said that, despite the nice table above which showed consistently increasing revenue and profit post acquisitions, that is in my opinion insufficient, as the time period is too short, and the real reason for the acquisitions is in order to be capable of taking on the really big contracts.

And this brings us to the China contract that they just obtained. For one, this is a CONTRACT, not a Memorandum of Intent (Which means nothing). 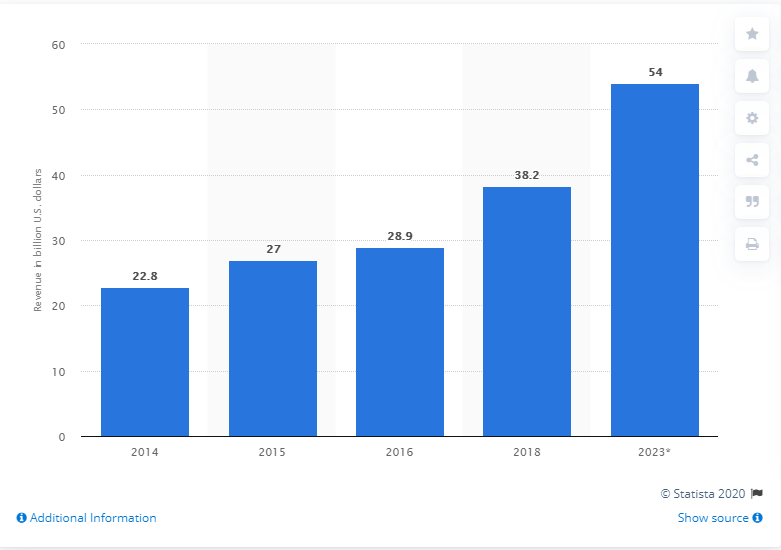 Given this pandemic, the data centre business is expected to go through an explosive growth period, as companies around the world digitalize.

And China will be growing especially fast. They have started speeding up the construction of their data centres. Baidu have unveiled plans to have more than 5 million intelligent cloud servers by 2030.

And Alibaba is going next level by announcing plans to spend 200 Billion Yuan or (USD28 billion) to build hyperscale data centres in China. They just finished 3 of them this year, with 10 coming in the next 2-3 years.

And KRONOLOGI just got a contract for one of them.

KRONOLOGI is a company run by Singaporeans who have the capability to provide services to TEMASEK. I am fairly certain they will do a good enough job with this contract to justify getting a few more of these contracts. And given the speed at which companies like Baidu or Alibaba is moving, these contracts should also be very juicy, as they will be focused on providers who can do a good job, not so much on price.

One of the difficulties in companies like these, is that it’s often not that easy to put a price on them.

If this turns out to be the start of something amazing, you are likely to severely undervalue the company. If it turns out horrible, you get WeWork etc.

Having said that, given KRONOLOGI’s track record, I think they have a good chance are turning out well. 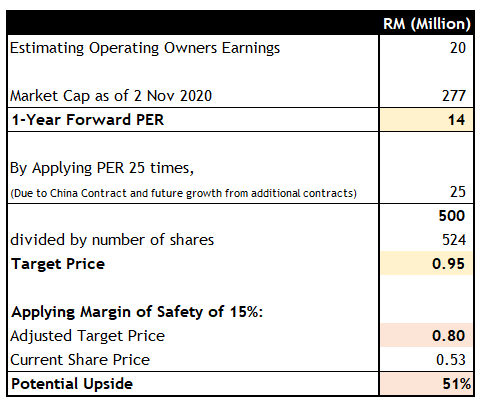 Given the new contract, i think there should be an increase in estimated operating earnings of RM18m (RM27m, less maintenance Capex of RM9m) in 2019.

To be very conservative, I’m only going to increase projected earnings by 10% to RM20m.

Given that this company grew Estimated Operating Owners Earnings to from RM9.2m to RM26.9m, as well as the Alibaba/Baidu data centre contract, I think a PE Ratio of 25 times is appropriate. For the record, most data centre companies are either 40-50 times Earnings, or 20-40 times Revenue.

And, One Last Thing.

Is it priced in? Other than the brief pop back in April-May 2020, which affected all stocks, it has only gone down since then and is way below its pre COVID price of RM1, despite having made a core operating profit in Q2, having obtained the Alibaba/Baidu data centre infrastructure contract, and having good financial structures and a net cash position.

In Q1, the company recorded a loss due to an impairment to PPE of RM11.6m taken out of prudence. As they had new infrastructure coming in, and they decided to replace their current PPE early to take advantages of the new PAAS demand coming. A portion of their old infrastructure was used by Hospitality, Airport and Airline customers, making Q1 an opportune time to replace them.

In Q2, like most companies in the world, they were affected by the pandemic, as well as higher air freight cost for their components, but still made a profit. This profit would likely increase as freight cost fall over time, and when the Alibaba/Baidu contract starts.

Based on the current price, I think most of the facts as well as the Alibaba/Baidu contract written above have not been priced into the stock at all.