Cash cow: A woman scans her body temperature before entering the EPF building in Kuala Lumpur. Post-Covid-19 outbreak, there are concerns on whether the EPF has been increasingly used by the government as a ‘cash cow’ to prop up the still-fragile Malaysian economy.

THE Employees Provident Fund (EPF) is in a real dilemma.

On one hand, it needs to uphold its mandate as a sustainable national retirement fund for an ageing country.

On the other hand, it needs to deal with public and political pressure to act as an emergency fund provider to its contributors in times of crisis.

Post-Covid-19 outbreak, there are concerns on whether the EPF has been increasingly used by the government as a “cash cow” to prop up the still-fragile Malaysian economy.

From cash withdrawals to reduced rate of contributions, the EPF has complemented the government’s measures to put more cash into the rakyat’s pockets.

An estimate by StarBizWeek shows that up to RM63.3bil are expected to be made available from the four measures related to EPF announced this year.

These are, namely, by chronological sequence:

The measure was announced in February 2020 by the former interim prime minister Tun Dr Mahathir Mohamad in the country’s first stimulus package for Covid-19. It was estimated to provide EPF members a cash flow of up to RM10bil.> i-Lestari withdrawal facility until end-March 2021.

In April this year, the i-Lestari withdrawal facility was launched to allow EPF contributors withdraw up to RM500 monthly from their Account 2 until March 2021. Under this facility, up to RM30bil are expected to be withdrawn.

While it was first announced under Budget 2021, the facility was tweaked following political pressure, especially from Barisan Nasional and former Prime Minister Datuk Seri Najib Razak. i-Sinar is a targeted “advances” facility whereby EPF members can get monthly advances of up to RM60,000. It only covers active members who have lost their jobs, given no-pay leave, or have no other source of income. Members who choose to apply for the i-Sinar facility will be required to replace the full amount advanced. About RM14bil are expected to bte made available for the facility.

> A reduction in employees contribution from 11% to 9% beginning January 2021 for a period of 12 months.

Finance Minister Datuk Seri Tengku Zafrul Aziz has announced under Budget 2021 that the reduction will benefit EPF contributors with a potential cash flow of up to RM9.3bil.

Assuming the four measures are fully taken up by EPF members as expected, it would mean that the retirement fund’s cash flow may be affected by over RM63bil up until the end of 2021.

This is not inclusive of the annual withdrawals already taking place due to members reaching the age of 50 or 55 as well as withdrawals from Account 2 for house purchase, education and other reasons.

In fact, the RM63.3bil amount is also not inclusive of the Employer Covid-19 Assistance Programme (e-CAP), which allows employers to defer and restructure their share of contributions.

In a statement on Sept 19, the EPF has said that a total of 10,528 applications were approved, amounting to RM70.4mil under the e-CAP.Extraordinary measures for extraordinary times?

The decision by the government to allow withdrawals from the EPF has its own fair share of supporters and critics.

Critics are saying that allowing such withdrawals and lower rate of contribution would affect members’ total savings by the time of retirement, especially for low-income individuals. 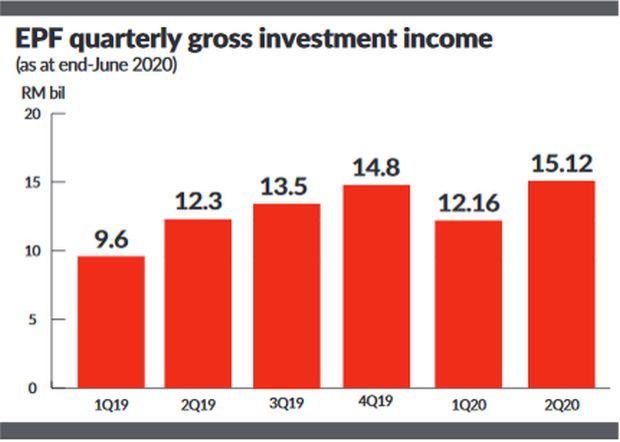 After all, latest available statistics from the EPF shows that as much as 54% of EPF members aged 54 and above have savings of less than RM50,000, while only 34% have reached the level of basic savings by the age of 54.

It is noteworthy that the EPF has set the basic savings quantum at RM240,000, which is equivalent to a monthly retirement income of RM1,000 for 20 years from age 55 to 75.

It is, hence, surprising that even the Prime Minister Tan Sri Muhyiddin Yassin and EPF chief executive officer Alizakri Alias have previously advised the contributors against withdrawing savings from Account 1.

Not only that, critics are also concerned that EPF’s cash flow may be adversely affected due to the lower contributions and withdrawals, especially after Alizakri said that the EPF may liquidate some of its assets to fund the withdrawals.

Financial planning firm MyFP Services Sdn Bhd co-founder and director Robert Foo says that the EPF would likely have to sell its profit-making assets to free up some cash for the withdrawals.

“This would affect the returns of the fund, especially the future potential returns.

“Most people in Malaysia depend on the EPF for their retirement, so you wouldn’t want to risk the returns, ” he said.

Supporters, on the other hand, are of the opinion that the retirement fund may not be significantly affected by the measures.

An industry observer notes that the RM63.3bil amount represents only over 6% of the EPF’s total fund size of RM929.64bil as at end-June 2020.

“The EPF has about 6% to 7% of its assets in instruments that can be readily converted into cash such as money market instruments. So, it wouldn’t be a problem for them to find the cash.

“In fact, the EPF has been doing well this year in terms of profits. That would definitely provide some support to its fund size and cash flow, ” he says.

For perspective, the EPF has recorded a gross investment income of RM12.16bil in the first quarter of 2020, which marks almost a 27% year-on-year (y-o-y) increase from RM9.6bil. 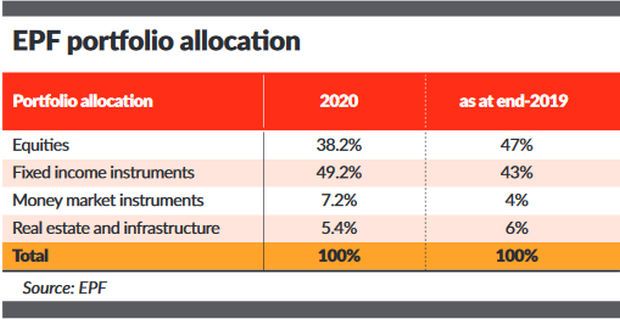 In fact, the RM15.12bil amount was the highest quarterly gross investment income since 2019.

As such, the EPF may not have difficulties in paying a dividend rate comparable to recent years.

Former deputy secretary-general of the Finance Ministry Tan Sri Ramon Navaratnam has lauded the move to allow members to withdraw from the EPF.

“We are in a state of emergency. The priority now should be on putting the food on the table, instead of retirement some 20-30 years later.”

However, he says that by allowing the withdrawals, there will be less funds under the EPF to invest.

“The fact is the government depends on the EPF for domestic financing, and when the EPF has less funds to invest, it would affect the demand for government issued instruments such as bonds, ” he says.

As a fund entrusted to safeguard Malaysia’s life post-retirement, the EPF ought to be the last resort to support the rakyat’s consumption and purchasing power.

By constantly tapping into the fund for cash, especially due to the pressure from political parties, it raises scepticism on whether the EPF would have adequate “fire power” for sustainable operations over the longer term.

It also raises questions on the necessity of the measures announced.

With most working Malaysians already back at work, one wonders whether facilities like i-Lestari have been made available even to those who are not affected by retrenchments and pay cuts.

To put it into perspective, since the launch of i-Lestari at the beginning of April 2020, about RM12bil have been withdrawn, benefitting 4.7 million members to date.

Have these 4.7 million individuals out of the total 14 million members lost their jobs or suffered a pay cut?

Latest data from the Statistics Department shows that unemployment numbers have been dropping, albeit gradually, to 737,000 individuals as of Sept 2020.

“Chances are some may have withdrawn cash for extra spending, which defeats the purpose of the EPF facility in the first place, ” says an observer.

Experts have called upon the government to see the current situation as an opportunity to bolster EPF as a sustainable entity for an ageing country like Malaysia.

Ramon and Emeritus Professor Norma believe that higher wages would be highly crucial in strengthening EPF members’ contribution over the long run.

“Despite the withdrawals during this time of crisis, contributors can increase their contribution in the future if they enjoy higher salaries, ” says Norma.

Concurring with Norma, Ramon says that a high-income economy should be the way forward, although he points out that the country’s productivity should rise in tandem with higher salaries.

“The government must make structural changes through improved education system to suits future market demand, give more importance to meritocracy by moving towards needs-based policies and through liberalisation of our economic policies.

“Another crisis like what we are facing now may happen again. Hence, the government must be more prepared to tackle it.

“The EPF cannot be a standalone mechanism and instead must be part of the country’s social welfare system that can readily-support the population in times of crisis, ” he says.

Meanwhile, Foo of MyFP Services has urged the EPF to allow its contributors to invest in foreign unit trusts for better diversification and returns.

Currently, members are allowed to channel a portion of their savings to EPF-approved unit trusts under the Members’ Investment Scheme (MIS).

It is noteworthy that earlier this year, the EPF has reduced the upfront fees charged by Fund Management Institutions for the unit trusts for a period of 12 months ending April 30,2021.

Fees on investments made through agents were reduced to a maximum of 1.5% from a maximum of 3% while no upfront fees are imposed for investments transacted through i-Invest via the EPF i-Akaun.

However, Foo believes the upfront fees should be further reduced.

“As a large fund, the EPF has the power to demand the unit trusts to reduce the charges to around 1%. This will allow the contributors to enjoy a higher return due to lower costs.

“In many foreign countries, the charges are around 1%, some even at 0.75%. So, the contributors must be given the option to also invest in this foreign unit trusts for higher profits after costs, ” he says.