THE electric vehicle (EV) segment, riding on growing global EV sales, is widely seen as a key beneficiary of the ongoing technology rally.

Will it prove to be the linchpin of the local technology sector? And are the valuations for these players still attractive, given that the share price of most of these companies has already risen manifold?

Calling this the golden age for EVs, ­analysts anticipate exponential growth, to the advantage of those with higher EV content such as Malaysian Pacific Industries Bhd (MPI) and Pentamaster Corp Bhd. Both companies are expected to benefit from an increasing use of silicon carbide (SiC) in power management applications for EVs.

CGS-CIMB Research in a Jan 25 note says SiC is particularly useful for EVs because it allows the EV manufacturers to extend the range of the EV battery, reduce cooling and minimise the footprint of the inverter and battery.

Market research group Yole Development projects the SiC power management market will deliver a five-year sales compound annual growth rate (CAGR) of 30% from US$541 million in 2019 to US$2.5 billion in 2025, driven by accelerating SiC adoption in inverter, on-board charger and charging infrastructure for EVs.

CGS-CIMB Research notes that outsourced semiconductor packaging and testing services (OSAT) will benefit from increased semiconductor content value going into automotives, on the back of accelerating EV penetration.

The research house points to comments by the International Energy Agency that EV sales are projected to reach almost 14 million and 25 million in 2025 and 2030, representing 10% and 16% of global annual vehicle sales, respectively. This will provide long-term demand visibility for the automotive semiconductor market.

He says the expected surge in the EV business over the next five years will attract investment interest.

“Government policies to push for EVs have shifted consumers’ choice and carmakers’ direction. Similarly, in Europe, the EV market share is about 9.9% currently from 3% a year ago. So, you can see a big difference.

“I believe everyone will try to tap the EV market, but the existing ones would be the anchors. The automotive segment generally has very stringent auditing or qualification periods; so, you can’t penetrate the segment overnight. The entry barrier is much higher,” he tells The Edge.

HLIB Research analyst Tan J Young agrees that EVs will be the trend going forward, along with subsidies from governments to control pollution. “Given the mushrooming of charging stations globally, we should see stronger demand for EVs.”

One Bursa Malaysia-listed entity that is looking to break into the EV segment is JHM Consolidated Bhd, but it is understood that it has yet to firm up plans.

“They want to work with a US customer on a module that is used for electric charging stations, but they have not commenced operations yet,” an analyst says.

Seeing the vast potential in the EV segment, KESM Industries Bhd is expanding its automotive semiconductor manufacturing capacity to cater for future demand from EV makers.

Last month, the company announced a new investment in a factory of more than 100,000 sq ft in Melaka to support future growth in burn-in and test of automotive semiconductors. It is worth noting that the top five of the world’s 10 largest car semiconductor manufacturers are its customers.

Most technology firms are trading at lofty valuations, but Kenanga’s Tan believes they are justifiable, with the structural change for the technology sector. “Forward 12-month price-earnings (PE) ratio of 50 to 60 times is digestible, backed by strong earnings. Nobody dares to sell now. The underlying demand is strong, given the semiconductor chip shortage.”

Nonetheless, Greatech Technology Bhd and UWC Bhd are trading at a higher forward PE of 91.6 times and 70 times respectively.

The following are key beneficiaries of the EV segment:

MPI is riding on growing SiC adoption in EVs, given its unique position as the exclusive backend service provider for Cree, a semiconductor manufacturer in the US.

The company has installed and commissioned the first four assembly lines to package SiC products for Cree in Ipoh. It is in discussions with Cree to add more SiC assembly and packaging lines in view of the latter’s production ramp-up, with a new wafer fab scheduled to begin production in 2022.

Although the contribution from SiC power management packaging service is expected to be minimal, contributing only 2% to 5% to MPI’s revenue in FY2021/22, CGS-CIMB Research says it is excited about the growth opportunities in SiC packaging beyond FY2022.

“Moreover, we believe the potential increase in SiC packaging beyond 2022 will help MPI meet its target of deriving 50% sales from [the] automotive segment within the next three to five years.”

MPI is mainly engaged in the provision of OSAT and the manufacture and sale of lead frames. The automotive segment contributed 31% to revenue in FY2020, pipped only by the communication segment at 32%.

The company is now worth over RM7.6 billion after its share price tripled in the past one year to RM36.14 last Monday.

Similarly, Pentamaster will benefit from the rising penetration of SiC in power management applications for EVs by capturing opportunities in the EV battery market.

The automated test equipment (ATE) provider foresees that demand for its assembly and test equipment will increase, judging from orders secured from new global automotive component companies in Europe, the US and China.

Pentamaster has been looking to reduce its reliance on the smartphone segment by expanding into the EV business. Progress has been encouraging, as revenue contribution from the automotive segment more than doubled to 25.3% as at end-September 2020, from 10% a year ago.

The company’s share price has jumped 86% in the past one year, valuing it at RM4.5 billion. Its nine-month net profit slipped 19.4% to RM48.82 million from RM60.59 million in the previous corresponding period, owing to an expected credit loss allowance on trade receivables amounting to RM5 million. 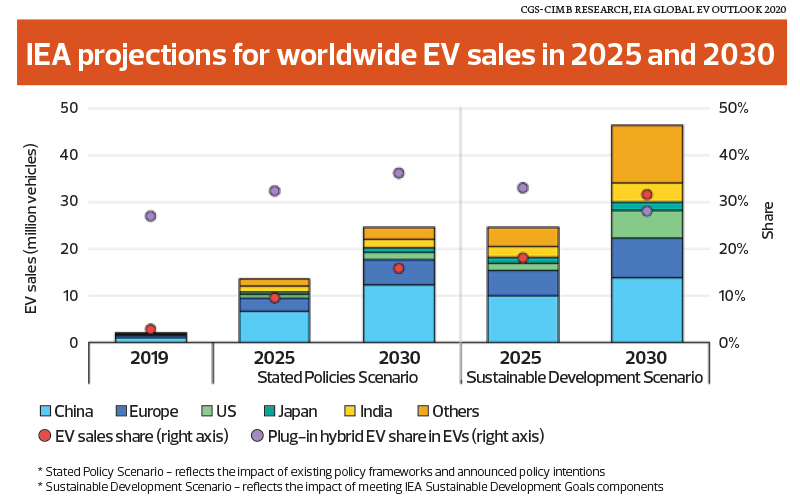 Greatech, an industrial automation solutions provider, has just announced plans in the EV segment. Its unit Greatech Integration (USA) Inc is partnering with US-based Atlis Motor Vehicles to assist the latter in developing an EV battery pack assembly production line at its headquarters in Arizona.

Atlis is a start-up mobility technology company that is developing a fully EV platform. It is nearing the advanced stage of its battery pack development, and intends to move to small-scale production.

Greatech was transferred to the Main Market on Dec 28, 2020, after tremendous growth in its earnings and market capitalisation. As at last Monday, the company was valued at RM7.9 billion, a 17-fold jump from its market cap of RM463 million at its listing in June 2019.

D&O is poised to benefit from the growing LED content per vehicle, particularly in the EV segment. It is in the midst of increasing its equipment capacity to meet market demand that is mainly driven by the increased implementation of infotainment systems even in entry-level car models as well as a growing demand for its exterior LED, notably the rear combination lamps.

The company recently completed its second plant, which is about 270,000 sq ft. It has order forecasts from key customers that extend until 2025, in line with the automotive i

ndustry practice, which has long road maps for new and facelift models.

D&O has expanded its business to include LED module design and manufacturing, and integrated circuit design and development for LED applications in response to changing industry trends and customer requirements.

Its share price has been on an upward trend in the past one year with a return of 270%, taking its market cap to RM3.55 billion. However, its forward PE is relatively high at 96.3 times.

For the first nine months of 2020, its net profit was down 8% y-o-y to RM19.33 million, from RM21.02 million, owing to higher distribution and administrative expenses. Its gross profit margin stood at 26.1%.