Looking At Bitcoin's Other Nuanced Factors 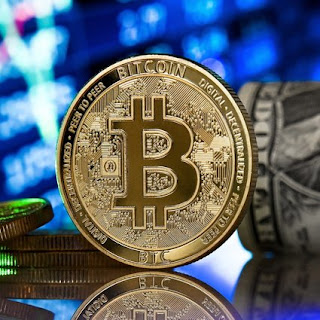 It has been said that the more you know about investments, the less likely you are going to buy Bitcoins and the related new fangled stuff. We can argue for or against buying Bitcoins. But let's look at the prevailing nuanced factors which most do not talk about.

THIS IS NOT A BUY OR SELL CALL, just an opinion.

a) A growing proportion of protestations over the amount of electricity needed
(and wasted) to mine Bitcoins. This negativity can only get louder as more special interest groups get into the act.

b) Who are the biggest holders/owners of Bitcoins? Let's look at the known individuals. Somehow there have been numerous tabulations with different people at the top. To consolidate somewhat: 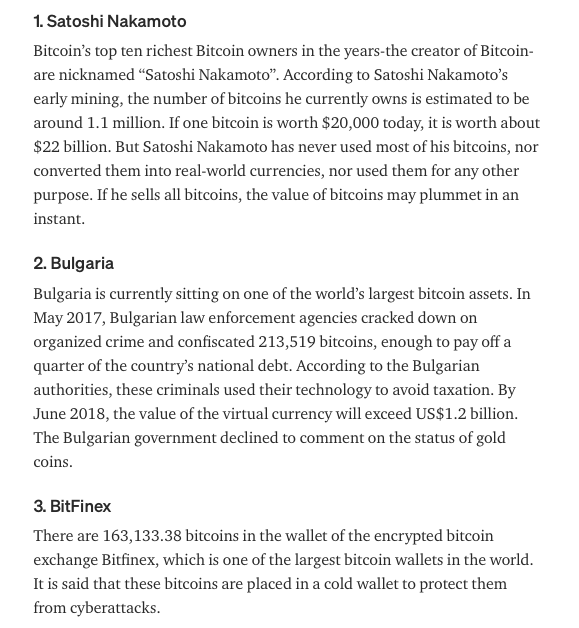 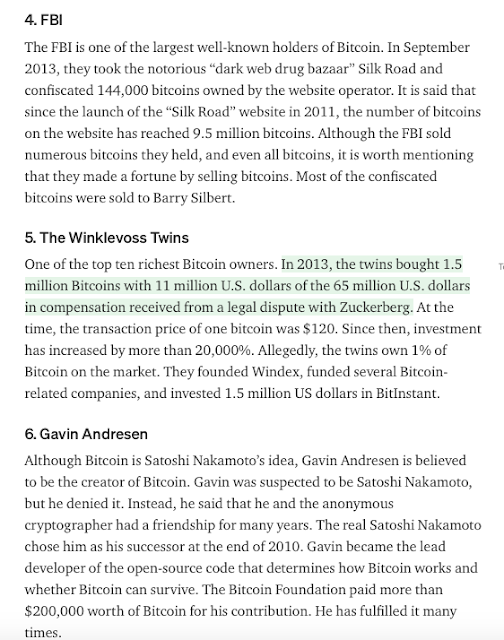 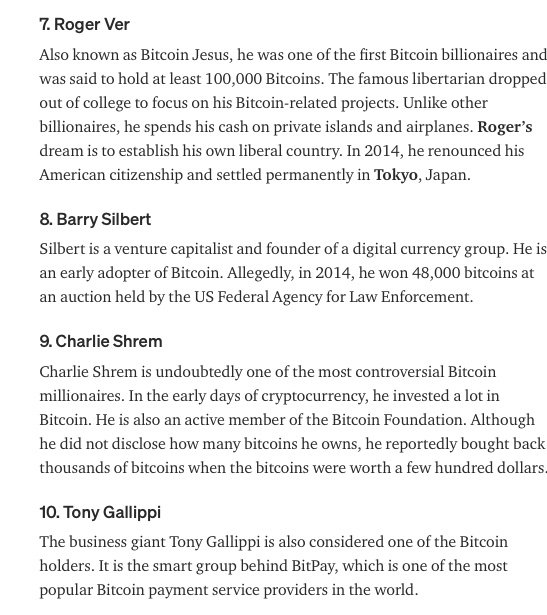 c) It has been speculated that one of the biggest Black Swan for Bitcoin is for Satoshi to appear out of nowhere. While some might say it could lend "explanatory positives" or even a "Messiah effect", the real impact is that the "invincibility is gone" - what you don't know actually fuels the insanity. If he/she appears, SELL first ask questions later.

d) You should be a bit shocked looking at Bulgaria and FBI, but the more the "regulatory & government" arms use the same network to look for crooks and money laundering, you can expect more discoveries and arrests. Can this be a positive or negative for Bitcoins? I think it is a positive. The more you have "hidden regulatory powers" at work, the more will the financial powers and governments be willing to "accept" Bitcoins.

e) Looking at the other compilation below, which is more believable. The key is that other than Satoshi, no one really "controls the float". Even the funds that buys/invests as a collective force cannot really move the markets. Why? You can look at the swings for the past 2 weeks. The liquidity is there. The panic selling and the bottom fishing people are there in droves. This a major point - Bitcoin can take the blows, as much as I dislike saying this - its a long term positive for Bitcoin. The only maverick wreaking havoc has be Elon Musk, whose tweets and jokes can move the price up or down appreciably. Elon should stop tweeting. But that tells you a lot about Bitcoin, to move in a volatile manner based on one person's tweets, what kind of asset are you really??? I mean, if Elon says something positive about GOLD or a specific stock, I doubt it would have an impact as great. Which is to say Bitcoin is baseless (as in not based on anything other than perception and supply/demand). As the rate of new coins has slowed to a crawl, the demand side can and will only get greater.

f) CAVEAT: I do see a big Black Swan II that could derail Bitcoin, if certain governments come out and ban all trading and buying or holding of Bitcoins for their citizens. Not all countries can do that. But imagine China and another one of the top 5 OECD countries do that, it could be end of story. 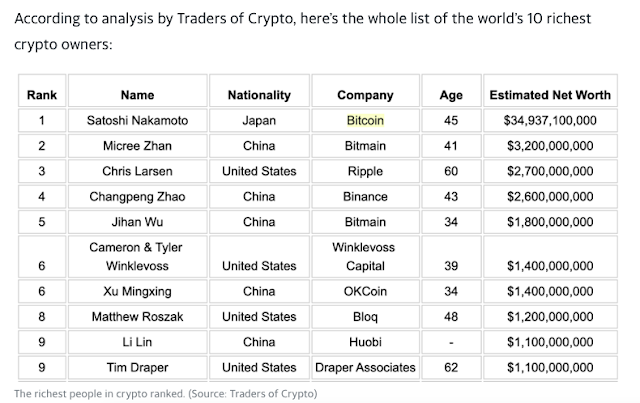