KENANGA RESEARCH (SEPT 28): As at March this year, coal-fired plants made up 48% of TNB’s generation asset portfolio in Peninsular Malaysia and contributed about 24% to the group’s revenue. To address this issue, TNB is set to increase its renewal energy (RE) assets to 8,300MW by 2025 from 3,406MW currently, with RE making up 10% of group revenue from 5% currently. It has budgeted RM6.5 billion for this capacity expansion, where more than 97% is from two geographical areas, the UK and Europe, as well as Southeast Asia, with only 361MW expansion locally. Meanwhile, our stress test shows that TNB has no financial issue for such expansion, with its gearing still at comfortable levels of 45% to 46% throughout FY22 to FY25, meaning it still has room to gear up to the optimal level of 55%, from 46.3% in FY20.

After its last new coal plant, the 70%-owned Jimah East Power (JEP), which was commissioned in 2019, TNB has pledged not to invest in greenfield coal plants in the future. It has committed to reducing coal-based capacity by 50% in 2035 and to be coal-free by 2050. We believe these commitments are achievable, given that two TNB-owned coal plants will be retired in 2029 and 2030, which would reduce its coal generation capacity by 46% by 2030, while JEP’s power purchase agreement will expire by 2044, after which there will be no more coal-fired plant, way ahead of its 2050 coal-free target.

We are positive over its RE expansion plan and its commitment to be coal-free by 2050 to address ESG concerns. We also like its resilient earnings profile, which keeps its dividend payout consistent with potential for a special dividend in place. Thus, its FY22 PER of 10.7 times seems fairly attractive. As such, we continue to rate the stock as “outperform” with a higher target price of RM11.80 from RM11.76, reflecting its updated asset valuation and trailing mean PER. The stock is also supported by a decent dividend yield of more than 4% with potential for a special dividend. Downside risk to our recommendation is weaker-than-expected earnings from non-regulated businesses. 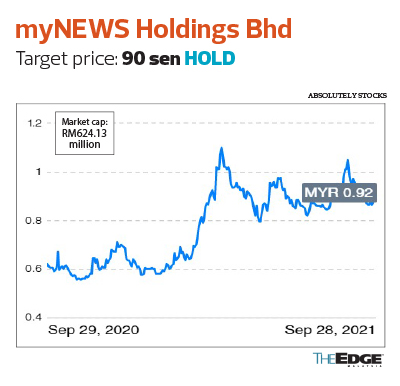 CGS-CIMB RESEARCH (SEPT 28): As movement restrictions across most states have gradually eased from August, we expect footfall and sales to recover in 4QFY21. A normalisation in footfall could also lead to a better product mix in our view (favouring ready-to-eat food compared with lower-margin essential items), which could aid in gross margin recovery. We also expect the group to aggressively resume the opening of new CU-branded outlets to meet its target of about 30 stores by end-2021.

We lower our FY21 EPS forecasts mostly to factor in weak sales in 3QFY21. We maintain our “hold” call on the stock with a lower target price of 90 sen, in line with our earnings downgrade. Our target price is based on an unchanged 24 times CY22 PER, in line with regional convenience store peers. We think current valuations fairly reflect the near-term recovery prospects and risks. Notwithstanding near-term challenges, strong reception for its new CU outlets and myNEWS SUPERVALUE stores could drive medium- to long-term growth. Key upside and downside risks are better- or weaker-than-expected reception for its CU outlets, as well as faster- or slower-than-expected recovery in sales per store. We have forecast three-year core net profit CAGR of 27.5% (FY21-24) for Revenue, underpinned by a sustained shift towards electronic transactions in the domestic market. We revise our earnings estimates for FY22 and FY23 by -1% and +2.5% respectively, the key change being a stronger solutions segment outlook in FY23. Target price is derived as SOP of: (1) CY22 fully diluted EPS multiplied by PER target of 50.6 times; and (2) net cash from the warrants exercise. Within the e-payments space, we prefer GHL Sytems Bhd for its entrenched payment processing-focused platform, with sizeable transaction payment value and regional exposure in emerging Asean. Notable catalysts include a digital banking licence win and accelerated adoption of fintech solutions to build a stronger payments ecosystem. PUBLICINVEST RESEARCH (SEPT 28): We are expecting demand for the marketing and distribution (M&D) segment to improve in 2HFY21, following the gradual reopening of the economy as more than 80% of Malaysia’s adult population has been fully vaccinated. This should also bode well for the distribution channels of the hotel, restaurant and café segment, which was affected by the Covid-19-related movement restrictions. While the distribution for healthcare products has been negatively affected by the lower footfall in hospitals, we think that patient volume is likely to pick up post-reopening.

DKSH is slowly reaping the benefits of its internal efficiency project, which saw its 1HFY21 Ebit margin improve to 2.3% from 1.6% in 1HFY20, given better operational efficiencies. In addition, the better margin mix — given the higher contribution from its in-house brands — should continue to support its M&D segment margins.

While 3QFY21 is likely to be weaker q-o-q due to seasonality, we are expecting consumer demand to pick up in 4QFY21 amid festive spending. Meanwhile, we understand that the group is looking to take advantage of the lower interest rate environment by paring down some loans that it took to finance Auric’s acquisition previously.