Yesterday I posted my article namely “CPO hits historical high” in which I pointed out the share prices of SOP, Ta Ann and Jaya Tiasa shot through the roof.  Many of my readers asked me which plantation stock is safe to buy. That is why I am writing about TDM.

Key Highlights: • Plantation division: Stronger performance from higher average of CPO and PK prices. • Healthcare division: Recovery is inching further towards hitting pre-pandemic level, with a few hospitals already recorded revenue beyond pre-COVID achievement. Kuala Terengganu, 28 February 2022 – TDM Berhad (“TDM” or “the Group”) today announced its financial results for the fourth quarter ended 31 December 2021 (4QFY2021). The Group's revenue for the 4QFY2021 improved by 27% compared to the corresponding quarter. This was mainly due to higher revenue from the plantation division by RM30.8 million or an improvement of 42%, and the healthcare division by RM4.6 million or an increase of 8%. The Group recorded a Profit Before Tax (PBT) of RM67.1 million during the quarter, an increase of 17 times compared to RM3.8 million in the same quarter the year before. For the year ended 31 December 2021 (FY2021), the Group’s revenue improved by 15% compared to the previous year as a result of the revenue growth from its plantation division by RM46.8 million or 19% and healthcare division by RM21.3 million or 11%. The Group also registered a substantial increase in PBT by RM71.8 million, more than 8 times increase recorded during the year ended 31 December 2020 (FY2020). The Group reported an Earnings Before Interest, Tax, Depreciation and Amortisation (EBITDA) of RM181.9 million for the FY2021, compared to RM109.6 million the year before. The profit before tax of RM67.2 million and RM81.4 million for 4QFY2021 and FY2021, respectively, are inclusive of a one-off accumulated profits amounting to RM40.4 million from sublessees scheme.

Despite TDM’s highest revenue and profit in 10 years, its share price did not shoot up like all the other plantation stocks because it reported a small reduced profit in its latest quarter due to the write off a dis-continued operation. You can see TDM price chart below.

Since TDM wrote off the losses due to a dis-continued operation in its 2021 annual account, TDM should report better profit for the next few quarters due to the historical high CPO price.

TDM has 5 private hospitals. Based on an average cost of Rm 100 million per hospital, TDM’s 5 hospitals has an open market value of Rm 500 million.

TDM is ridiculously undervalued. TDM should report better profit for the next few quarters due to the historical high CPO price as shown on the CPO price chart above.

I am obliged to inform all my readers that TDM is my largest investment. I am not asking you to buy. But if you decide to buy, you are doing it at your own risk. 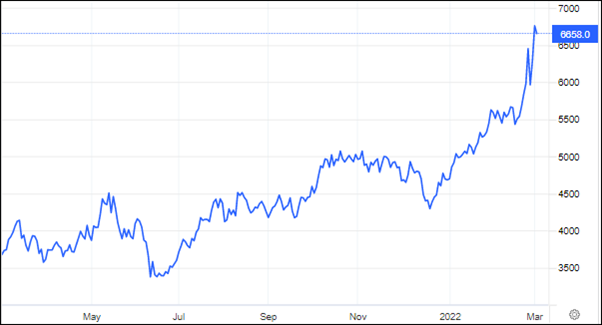