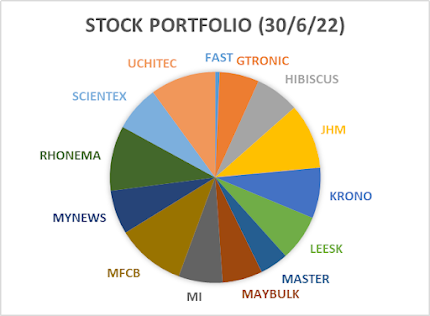 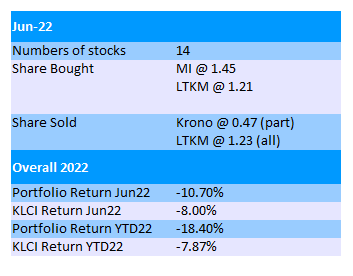 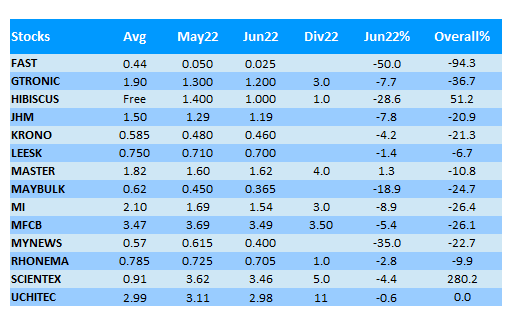 In Jun22, things go from bad to worse as KLCI plummeted 8%.

My portfolio inevitably performed badly as it shrank 10.7% in this month alone, bringing the year-to-date loss to 18.4%.

Currently the world is still overshadowed by inflation with the recession risk looming.

It seems like we are already in a small bear market.

KLCI lost "just" 7.9% so far this year. The reason is because it has never really gone up in the past 4-5 years or so.

If we are going to witness a real economy recession soon, KLCI still has much room to fall from current level of 1,450 points.

In Jun22, three stocks in my portfolio suffered heavily.

The first is Hibiscus. After briefly touching RM1.50 in mid May, the share price of Hibiscus fell non-stop to 90sen in Jun.

In the same period of time, Brent oil price dropped about 10% from around USD120 to USD110.

I was tempted to add more Hibiscus shares at below RM1 but I'm still yet to do so. In fact I have a plan to sell above RM1.50 but it didn't really go above this level.

The next two casualties in the month of June are Maybulk & myNews.

Maybulk fell 19% in this month since it announced a poor set of quarter financial result in late May.

It's very likely that new business(es) will be injected into Maybulk, perhaps in the form of property development or convenient stores retail business.

The market does not seem to take it positively though.

The share price of myNews dived 35% to 40sen especially after it announced financial result which was below expectation.

Its share price actually drifted lower slowly since May and I could sense that its upcoming result might not be good.

I don't expect it to turn profitable but I'd expect narrower loss in its FY22Q2 ended in Apr22.

However, its loss widened to RM10.2mil and its share price tanked as a result. This is its nine consecutive quarterly losses.

I did think of whether I should cut lost after this disappointing result. If it loses even more in its next quarter, surely its share price will take another big hit.

Anyway, after selling a small portion of its shares at 85sen in January this year, I decided to keep the rest first.

I still have confidence that it can turn profitable again in the future, despite operating in a highly competitive landscape.

For its next FY22Q3, I opine that the possibility of narrower loss is higher than widening loss.

QL has just reported the standalone financial result of its FamilyMart business in FY22Q1 ended in Mac22.

Its CVS segment registered RM177.2mil revenue and PBT RM15.1mil in the most recent FY22Q1. It has 290 FamilyMart stores in this period of time.

Its balance sheet is a bit worrying and remains a concern to me. 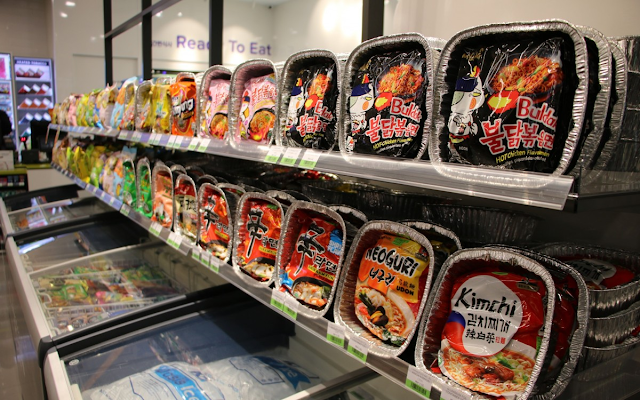 QL is a superbly well-managed company and some people might think that both are incomparable.

To me, I just think that it's possible that myNews will achieve its breakeven point one day, since it's a profitable company before the pandemic anyway.

CU might be the main culprit of the losses and it may take longer time to breakeven since being launched 2 years ago.

I guess even FamilyMart might not be profitable in 2 years time after its first launch in 2016.

FamilyMart has the first mover advantage and it has certainly set a good standard for other competitors.

Even though I heard that most people prefer FamilyMart over CU, I feel that both are almost the same in term of service and food quality.

My first visit to CU was not a too pleasant one as the hot foods were not hot enough. However, I was satisfied with my subsequent visits.

Besides myNews, Krono also released a poorer than expected quarter result with revenue and net profit of RM57.3mil and RM2.2mil respectively.

As a result, its share price also fell sharply.

Q1 is usually its softest quarter but a drop in both revenue and profit YoY is rather disappointing.

The main culprit is the 60% QoQ drop in revenue from both Philippines and China.

The company explained that the stringent lockdowns in China has resulted in commercial and production delays.

Anyway, I hope that this FY23Q1 result will be its lowest in this FY23.

When I topped up Krono's shares in March this year, I already set a plan to sell if things turn unfavourable.

That's why I decided to sell part of the shares at 47sen after the release of this poor result to reduce my risk exposure.

Its PBT stood at RM120mil but there was a net forex loss of RM10.8mil in this quarter alone.

Its packaging division faces the pressure of increasing raw material and freight cost as expected, and its property division was hit by delay in CCC and permit approval for new launches.

The share price of Scientex has retreated quite substantially since touching RM5 on 5th Jan22. At RM3.50 now, it has shrunk 30% in value so far this year.

In June, I bought and sold LTKM and managed to register a small gain.

LTKM has an RTO corporate exercise recently. I have read it and thought that it's worth a buy if its share price fell below RM1.30 so I just put it under my watch list.

Mr Chiau Beng Teik, the founder of Chin Hin Group is also involved in this RTO. 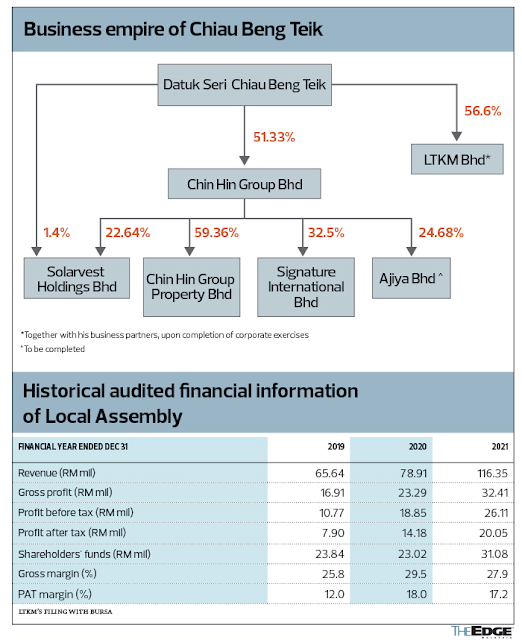 Furthermore, the profit guarantee of RM28mil in year 2022 given by the vendor means that its projected EPS will be 4sen.

My cost of 18sen per share means that I can buy the Local Assembly business at PE ratio of just 4.5x.

However, since 90% of the money we invested in LTKM will be paid back as special dividend, the actual amount of cash invested in Local Assembly is actually not much.

Anyway, it still feels like a sure-win investment, just that my fund in LTKM will be locked up for some time.

After I have purchased LTKM's shares, I went on to read its recent announcement only to find out that there was a revaluation of non-current assets of LTKM and the revaluation deficit was 10%!

I think it's possible that the capital repayment of RM1.1098 will be adjusted 10% lower. If this is the case, then it's not that attractive anymore.

That's the reason I decided to dispose its shares.

I'm not the one who invest in solid companies with moat and proven track records. Thus, I tend to suffer more when the market becomes bearish.

In hindsight, may be I should set a strict cut loss point at 10%.

I bought and also sold shares at the same time this year. Basically my cash level remains almost at the same level all this while.

Should I start to buy more than sell now? Or should I trade for short term just like in LTKM?

It's impossible to predict the stock market. In the second half of 2022, it can either stage a rebound or fall deeper.

In Malaysia, we might have general election anytime soon and it adds a bit more uncertainty apart from the inflation and recession risk.

What I see is that both MPI (RM27) & Unisem (RM2.10) are at quite an attractive level now. Should I add more technology stocks into my portfolio?