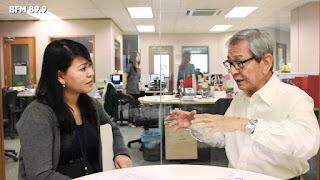 About 6 years ago, I offered Rm 30 million to UTAR to build student hostels within the University campus. It is an outright gift without any profit incentive. The MCA leaders, who own all the land outside the University campus, rejected my donation offer because they did not want the hostels disrupt their lucrative property business.

Whatever I said was not published because the MCA controls the newspapers. But the bad publicity spread like wild fire. As a result, MCA lost almost all their seats in the General Election.

The following article was written by Dato NH Chan, a retired Appeal Court Judge. He wrote the famous book “How To Judge a Judge”.

Why should MCA interfere with Utar?

Human nature is such that there are two kinds of human behaviour when it comes to charity – the pretentious and the altruistic donor. I have always doubted the sincerity of those who give to charity by proclaiming it under the flashbulbs of press photographers. In these amusing photo ops, you see the donors posing with an enormous mock cheque to emphasize the size of the donation. If you're truly charitable, why not dispense with the fanfare and write the amount on a normal cheque?

Having said this, I can now tell you about the truly altruistic gesture of philanthropist Koon Yew Yin. He made an offer of RM30 million, quite gratuitously, for the building of hostels for University Tunku Abdul Raman (Utar) students in Kampar.

Ever since the university was founded, its students have to find their own accommodation outside campus. In many cases, they have to pay exorbitant rents far beyond the means of poor or even middle class students.

The generosity of Koon was brought to my attention by the unflattering headline 'Tycoon wanted seat on council' in theSun (Sept 3, 2010). The article's sub-headline was 'Koon also wanted Utar residential village named after him, says MCA division chief'.

The MCA division chief in question, Ipoh Timur's Fah Chong, had said Koon’s requests were not acceptable as they had “exceeded the university’s jurisdiction and [could be] deemed an interference in the management of the university”. Thong added that hostels could not be named at one’s whim and fancy.

In his immediate response, Koon countered that while it was correct that while the facility was to be named after him, what he had specified was that the hostel blocks should be named after the fundamental rights of citizens such as Liberty, Justice, Equality, Fraternity, Freedom, Integrity, etc.

Koon also categorically denied he had ever requested a seat on the Utar council, clarifying instead that he had agreed to Utar's counter-proposal for a task force to oversee the construction of the hostels. He said his requests, including for a seven-man task force (four from Utar and three to be nominated by him) to oversee the construction of the hostels, and for all construction contracts exceeding RM10,000 to be open to competitive tenders, were to ensure everything was done in the interest of the students. He said it was not meant to interfere with the management of the university.

One may ask, why should the Ipoh Timur MCA division chief Dato’ Thong Fah Chong criticize the well meaning and generous offer of RM30 million for by a good Samaritan? Thong Fah

Chong even questioned the motive of Mr Koon Yew Yin for his offer of substantial financial assistance to UTAR. He accused Koon of wanting to sit on the Council of the University. This is a false accusation. It is not true because Thong has admitted that “late last year he had … arranged for the philanthropist to meet the then president of the MCA … but he was not aware of what transpired at the meeting apart from the request”. If he was unaware of what took place at the meeting, then how could he say that Koon wanted to sit on the University’s Council?

Furthermore, why should a member of the MCA interfere with an offer of a donation to the University? Should it not be left to the University to accept or not accept the offer without having to cast aspersions on the motive of the donor? If you must refuse the offer, surely it is polite to refuse it graciously? But the way it has been handled by Thong Fah Chong as the representative of the MCA has reflected badly on the upbringing of the man as well as on the sincerity of the Association.

Not surprisingly, Koon has now withdrawn his offer? Can you blame him? Anyone in Koon’s shoes would have done the same thing.

A English celebrated lawyer of the 18th century, William Blackstone, was the first Vinerian Professor of Law in Oxford University, as was the renowned Geoffrey Cheshire later. The law professorship was named after a certain Mr Viner who had endowed on Oxford a large sum of money.

For his offered RM30 million, Koon did not even ask for a professorship to be named for him. All he asked was for any eventual profits from the hostel rental in future to be overseen by a foundation in his name, and for this foundation to disburse scholarships and other forms of assistance to Utar students.

And what is so wrong for the donor to establish a foundation in his name to oversee the utilization of his donation? Alfred Bernhard Nobel, 1833-96, Swedish chemist, engineer, and philanthropist – noted for his invention of dynamite (1866) – is a household name today for his bequest granted the foundation awarding the Nobel prizes.

But in Malaysia, Utar and MCA vilified Koon for demanding accountability and transparency in how the university and its authorities from the political party would manage his RM30 million. Their action sinks my opinion of the MCA to an even lower level.

After I retired from the bench in the year 2000, I returned to Ipoh. Here I met Thong who became a friend. Later I befriended Koon during the height of the Perak constitutional crisis of 2009.

Today I have lost respect for my erstwhile friend Thong because he tried to gain political mileage by vilifying poor Koon, an unpretentious retired engineer whose only sin – if you can call that a sin – is to offer RM30 million to build hostels for students.

Koon earned my respect and admiration because he was concerned with the plight of the thousands of students who face the uncertainty of not being able to find decent place to stay and have to pay extortionate rents to unscrupulous landlords besides. Since Utar students have to seek accommodation outside campus, the private house owners in the vicinity have taken advantage of the situation.

If you've been reading the Ipoh Echo – a fortnightly free newspaper – you will have noticed that for several months now the paper carries an advertisement of Koon Yew Yin’s offer of scholarships to poor students.

Koon has given scholarships to about 70 deserving students for the last three-and-a-half years and most of them are studying in Utar. The only repayment required of the recipients is their word -- a promise that when they're financially secure after graduation, they will in turn help other poor students.

Just for this year alone, the Koon Yew Yin scholarships are worth a total RM1 million, of which some three-quarters of the sum has been approved to those applicants who passed their interviews. This itself is a large amount of money to be coming from a single Malaysian individual, and furthermore one who does not bond the students to work for him.

Yet there are some people in politics – in the MCA for instance – who are wary or envious of the unpretentious and well-meaning millionaire.

There is really more to why Utar and its political masters did not accept the donation of RM30 million from Koon, but I won't dwell on the matter here.

But perhaps there is a lesson to be learnt from the withdrawal of Koon's offer more than one year after it was made.

With these dubious episodes occurring, you can understand why I choose to be apolitical. But for the young students who have nothing to do with politics and the parents who have to worry about their children's living environment the first time away from home, it is a disappointing lesson learned with some sad poignancy.