ASTUTE market observers would have noticed on the local bourse a group of individuals, supposedly acting in concert, who have amassed shares in more than 20 publicly traded companies. These companies — linked via shareholding and directorships — are often on the most actively traded list, with huge, fluctuating share prices.

“It (the companies) is all linked to the same person; usually, the most actively traded list on a daily basis involves these counters,” one source says when asked which are the companies that are linked.

However, research by The Edge (see chart on the 21 companies) indicates that while other businessmen have surfaced, the individual said to be in control of the group of companies is not officially onboard or present as a shareholder.

“This [his not surfacing] could be due to several issues,” another source adds.

It is also telling that nine of the 21 companies mentioned — AT Systemization Bhd, MLabs Systems Bhd, Focus Dynamics Group Bhd, mTouche Technology Bhd, Fintec Global Bhd, XOX Bhd, M3Technologies (Asia) Bhd and NetX Holdings Bhd — have their principal place of business, head office, business office or corporate office in Menara Lien Hoe, near Tropicana Golf Country Resort in Petaling Jaya. On its website, Lambo Group Bhd states that its address is at Menara Lien Hoe, even though the address in its annual report is in Old Klang Road in Kuala Lumpur. 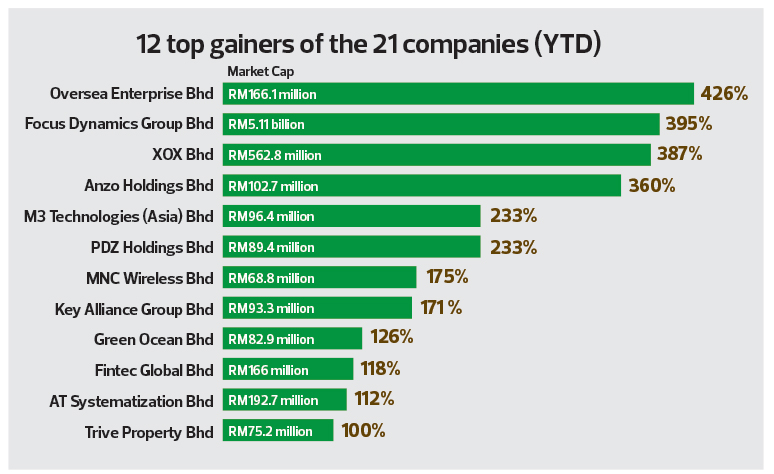 Vun has had several issues with the Securities Commission Malaysia and, in 2009, had to restitute RM2.496 million — being the amount of company funds that he had caused to be misused for his personal benefit, according to the regulator — to his then flagship FTEC Resources Bhd.

Since FTEC — which morphed into Tecasia Bhd and later Mangotone Bhd — was delisted, Vun has had little direct presence in the market. However, Vun’s two sisters, Carol Vun On Nei and Grace Vun Siaw Nei, hold stakes of 3.64% and 0.67% respectively in Xidelang Holdings Ltd. Other companies that surface as shareholders in these list of companies include Global Prime Partners Ltd and Cita Realiti Sdn Bhd, a private company wholly-owned by one Kamarudin Khalil.

Datuk Eddie Chai Woon Chet recently acquired a 62.37% stake in restaurant operator Oversea Enterprise Bhd, and has a 6.71% shareholding in Anzo Holdings Bhd, where he is managing director and has a board position in M3Technologies (Asia). Another name frequently seen is Datuk Kua Khai Shyuan, who, besides a 5.9% stake in mTouche Technology, has small shareholdings in Focus Dynamics, PDZ Holdings Bhd and Sanichi Technology, and has board seats on Trive Property Bhd, DGB Asia and MNC Wireless.

Most of the companies are loss-making and small in terms of market capitalisation, with the exception of Focus Dynamics, which has a market value exceeding RM5 billion. Nevertheless, Focus Dynamics, which is involved in operating food and beverage outlets, seems to be the star performer, with its stock price hitting a multiple-year high of RM2.64 recently on Sept 17, despite mustering a meagre RM3.08 million in net profit from RM20.72 million in revenue for its six months ended June this year.

Year to date, Focus Dynamics stock has gained about 400%.

Trading volume on most of the 21 companies is generally high, and many have shown unexplainable strong gains over the past few months.

For its nine months ended April this year, Saudee, whose mainstay is in frozen food and poultry, suffered a net loss of RM27.78 million from RM57.61 million in revenue.

If you are impressed with Saudee’s gains, Anzo — a loss-making company that has a business in timber products — gained more than 1,000% from mid-May to hit a high of 26 sen in July.

There are several companies on the list that have shown similar patterns.

XOX, which is involved in cellular telecommunication services, gained more than 430% from mid-July to hit a high of 39.5 sen at end-August. In mid-March this year, XOX was trading at one sen. The stock closed last Friday at 19.5 sen, translating into a market value of RM562.8 million.

Ailing shipping company PDZ’s stock was trading at one sen in mid-March, but at end-June, it gained more than 500% to 32.5 sen in mid-July. For a company mired in law suits and a significant dearth of shipping assets, PDZ’s meteoric rise is surprising to many. PDZ ended last Friday at 10 sen, giving it a value of RM89.4 million.

Similarly, Sanichi Technology, which is in precision moulding, saw a sudden surge in trading volume at end-May, with its stock spiking more than 150% to hit a high of 12.5 sen on June 2, after which it tapered off.

While the peaks may be enticing to punters, the change in fortune, with counters falling to their troughs, can be a deterrent. mTouche Technology, which has a wireless network and mobile messaging business, saw its stock crash from a high of 20.5 sen on Feb 20 this year to a low of 5.5 sen on May 12.

DGB Asia, a tracking solutions company, was trading at 19.5 sen in the early part of November last year, but by mid-March, it had shed most of its value to close at 1.5 sen on March 19.

It is also noteworthy that companies such as Water Beaute World Bhd and WBW Global Sdn Bhd, have 1.02% and 0.42% respectively in Trive Property. These two companies were involved in get-rich-quick and fake online investment schemes.

Both these companies were reported in the past to have stakes in XOX, while WBW Global also had a substantial stake in Anzo Holdings.