Master: Can History Repeat Itself? 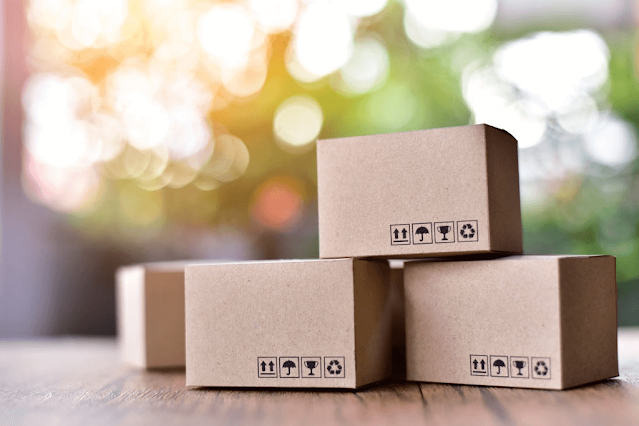 It is corrugated carton box packaging.

D'nonce is also involved in corrugated carton box manufacturing but it also has other paper & plastic packaging products.

The share price of D'nonce has gained handsomely since early Aug20 due to its supply to medical gloves companies. It doesn't seem to respond much recently may be because it follows the gloves trend more.

Anyway, the upcoming quarterly result of D'nonce to be announced later this month is worth to keep an eye on.

Is the carton box theme coming back since staging a rally in 2019?

I invested in PPHB at 57sen in 2019. Although I have sold all and made some profit, it did not go down very well with me.

I was making a decision between PPHB and Master at that time. Finally I chose PPHB as it has better profit margin and ROE, and I thought Master was too dependent on its solar customer which could be a risk.

I was also aware that Master was just commencing its Vietnam operation but I was wary of possible initial start-up loss.

What I did not know was that Master would supply First Solar in Vietnam and had ready demand.

PPHB was also going to open its new heritage-style hotel in Georgetown. To me the hotel location is extremely strategic and it would not take long to turn profitable.

Everybody knew what happened next. PPHB's share price rose by slightly more than 100% to RM1.20+, but Master rose by more than 200% in the same period of time, and I was left kicking myself.

To make the pain worse, I only sold all my PPHB shares at 88sen after it has dropped 35% from its peak, which was the day it gapped down 20% after a "horrible" FY19Q4 result in Feb20.

The consolation was that I still made 55% from PPHB and I felt lucky as Covid-19 sent it below 40sen in Mac20.

However, its share price has shot up at RM1.10 recently.

Due to the increase in factories activity and e-commerce, corrugated box packaging is back under the radar of investors once again.

There is no doubt that the recent surge in this interest is due to the record-breaking result of PPHB, who posted a quarterly EPS of 5.4sen while its share price stood at 70sen.

In fact, all those companies mentioned above announced surprisingly good results in Nov20, except Master.

That's why the share price of Master did not move much while all others were flying to the sky.

The management of Master mentions in its recent quarterly report that there is a temporary drop in revenue due to decision of a major customer to change to a new product model.

So investors would expect its revenue and profit to come back stronger when its major customer's new model is in smooth production.

When will this happen?

Now we all know that this major customer of Master is First Solar. 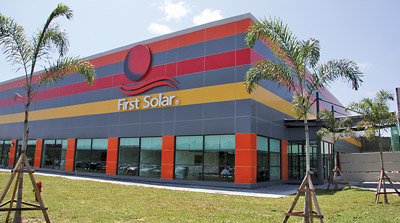 First Solar is the top solar panel manufacturer based in the US. It has 3 manufacturing plants that supplies the whole world, one in the US, one in Malaysia and one in Vietnam.

It seems like Master supplies carton box for both its Vietnam & Malaysia plants.

The main reason Master set up its plant in Vietnam in 2018 was to support First Solar's new plant there which commenced operation at the same time.

After achieving a record year in 2019, Master's management was honest enough to guide that "year 2020 may see some decline in overall results compared to year 2019" in its FY19Q4 results announcement on 28 Feb20.

With a nearly 50% QoQ drop in net profit, its share price limit down the next day from RM2.72 to RM1.91. Certain famous investors in Master might have faced margin call. 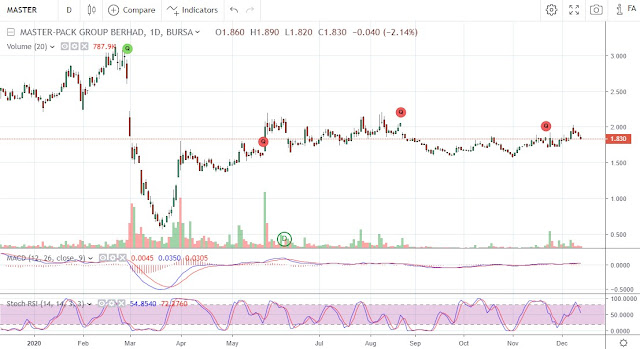 Now we know the reason management expected a slower 2020. It's because First Solar was phasing out its Series 4 modules to the latest Series 6 in its Malaysia plant.

In Master's FY20Q1 report announced in May20, it mentioned that the line change by its customer will take around 9 months. However, it might be delayed by MCO & CMCO.

In First Solar's latest FY20Q3 result announcement in the end of Oct20, it said that it was in the last phase of Series 6 transition with plan for its second factory in Malaysia to start up in Q1 of 2021.

So if there is no delay, I'd expect another flat quarter for Master in its FY20Q4 unless the lower material cost lifts its profit significantly.

Master's best quarterly net profit came at RM6mil (EPS 10.96) in its FY19Q3 which was achieved without significant one-off gain or loss.

For me, this should be its normal once First Solar Malaysia runs at full capacity.

Personally I see Master to worth RM4, but someone is much more ambitious than me. 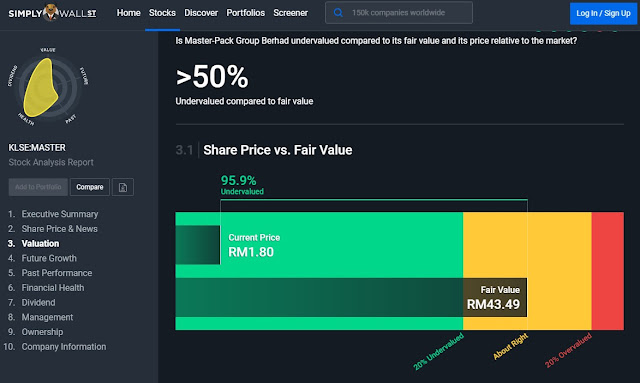 However, it was reported that he might remove the tariffs on imported solar cells & modules which will create more competition to US solar companies such as First Solar.

Anyway, solar energy demand is only expected to grow further and First Solar is in the midst of building another factory as all its existing ones are running at full capacity.

Penangites might be aware that there are so many Jinko Solar factories in Penang, Plant 1,2, 3...until 7 at least.

Jinko Solar of China is the largest solar panel manufacturer in the world. May I know who supply corrugated carton box to them in Penang???