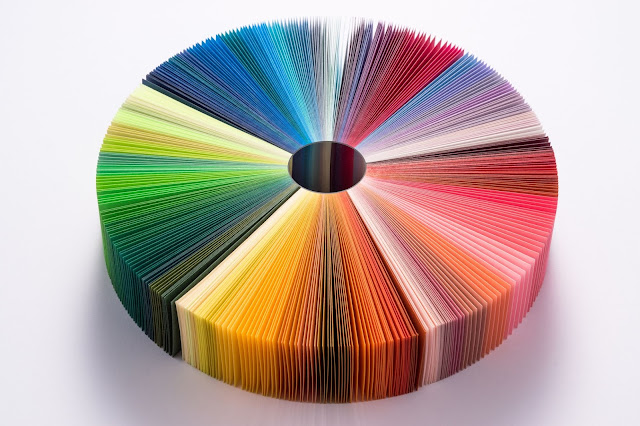 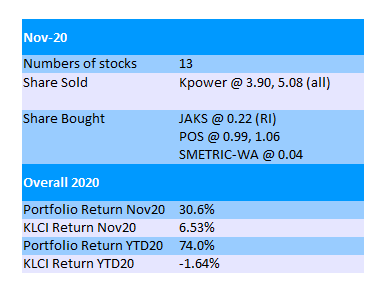 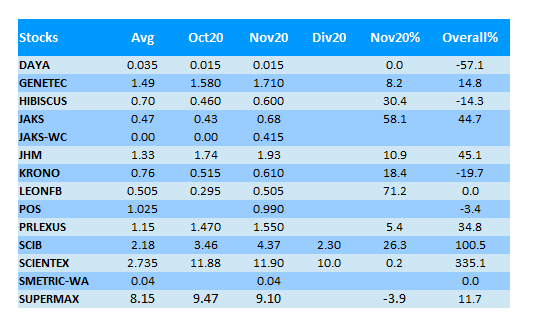 November 2020 is an unbelievable month for me. My overall portfolio gains 30% in a month which is a record high.

I have never had such result in my entire investment journey though it might be common for some readers especially those with only one or two stocks in their portfolio.

My previous record monthly positive gain was 20% in April this year when all stocks staged a V-shape rebound from rock bottom.

The main reasons for this record monthly gain is none other than SCIB, JAKS and KPOWER.

The share price of JAKS rose by 58% in November but my actual paper gain is much more than that if I include the value of its rights shares and free warrants. JAKS is my second largest investment thus it has lifted the overall portfolio significantly.

The share price of my third largest stock KPOWER also increased by 48% in a month. However, I already sold all of them in 2 tranches within November.

The reason I sold KPower was because it has reached my target price of RM4. Initially I just sold half of them and kept the rest, but as it continued to go up to RM5, I decided to sell all as I didn't expect a very good quarterly result anyway.

It turned out that I was only half right. The result was exactly what I predicted but I did not expect its share price to stay so strong.

In hindsight, I shouldn't sell all and should have kept the remaining half until the LSS4 contracts are announced in about one month time.

Although SCIB rose "only" 26% in this month compared to the other two, it has contributed a lot to my overall portfolio because it carries the highest percentage in my portfolio.

Surprisingly Leon Fuat is my best performer in November with a whopping 71% gain, after it released its quarterly result which was a good one.

Once upon a time my Leon Fuat purchased at 50.5sen was sitting on a paper gain of 95% only for it to slump to a paper loss of 60% in Mac this year.

To me Leon Fuat is a good company which I never want to sell at a loss, instead I always have a plan to average down at around 30sen.

However, its share price shot up too fast before I could react. So it's an opportunity missed...

Besides, Hibiscus also gains 30% in a month due to the rise in crude oil price. In the month of November, Brent oil price rose ~26% from USD38 to USD48.

The first tranche of Hibiscus CRPS at conversion price of 66sen has zero subscription as expected, while the second tranche at 48sen successfully raised RM203.6mil. However, it is still far from its target of RM2 billion.

I'm sure the management is working hard to acquire quality oil producing assets so I will wait patiently for that.

The only stock that registered monthly loss in my portfolio is Supermax which dropped 3.9%. 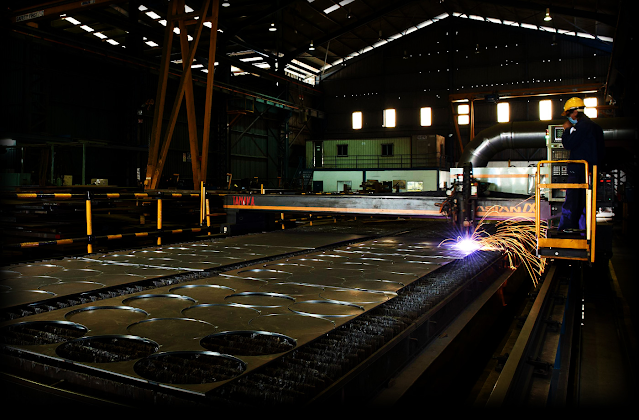 Most companies in my portfolio announced their quarterly results in the month of November. I'd say there is neither fireworks nor bombs this time.

Leon Fuat's result might be excellent but it does not surprise me.

The financial results of SCIB, KPower, Genetec, JHM, Hibiscus, Krono & JAKS are all OK in my opinion.

Krono's result is a bit above my expectation. It has revealed that the customer of its RM23mil cloud hyperscale contract in China is Baidu. The contract will run from Dec20 to Apr/Jun21.

Although the sum of the contract is small, it's better than none and might open itself to further opportunities in China.

The net profit of SCIB is not as good as I hoped for, but it's still acceptable to me and I think this will pave way for a much improved result in its subsequent quarter of FY20Q4.

Other than subscribing to JAKS rights shares, I added POS & Smetric-WA into my portfolio in November 2020.

I have written about POS before and I expected a turnaround in its fortune. It didn't turn profitable in its recently released FY20Q3 but it was still a decent improvement.

As for Smetric, I just bought a little bit as I "felt" that its Cybersecurity business has a good future. I have to be frank that I don't fully understand its business and the competition it faces, so I don't invest a lot in it yet.

The two things I like about Smetric are its "SigningCloud" which was just launched in July this year, and also the fact that it has set its footprints in 7 Southeast Asia countries.

I bought its warrants just to be more adventurous as it still has relatively long expiry date of more than 2 years.

From December onwards, good news of Covid vaccines are expected to flow in more. So it might be wise to look into companies and businesses that are being hit hard by the pandemic.

How about vaccines stocks?

The only vaccine related stock that I'm interested in is DKSH even though it might have nothing to do with it. The rest I just have no idea how to buy them.

As my portfolio ends November on a high note, it's certainly at risk to fall during December.

I hope that luck will continue to be on my side to sail through this tricky December uneventfully.