SINGAPORE-listed Riverstone Holdings Ltd may not be a popular stock among local investors here, but the Malaysia-based nitrile cleanroom glove maker is actually one of the world’s largest listed glove companies in terms of revenue after the Big Four.

Headquartered in Bukit Beruntung, Selangor, Riverstone also operates manufacturing facilities in Taiping, Perak, which is its main and largest plant, as well as in Thailand and China.

At a time when most glove makers and new entrants are ramping up production capacity aggressively, Riverstone executive chairman and CEO Wong Teek Son says the group has decided to expand conservatively and responsibly.

“Today, there are so many glove manufacturers in Malaysia. Everyone has been rushing towards the healthcare glove business since the Covid-19 outbreak. But we want to differentiate ourselves by strengthening our leading position in the cleanroom glove segment,” he tells The Edge in an interview.

“We need to be prepared for the post-pandemic era. Yes, we wish to reap the short-term benefits of the healthcare glove business, but we must not sacrifice the long-term growth of the cleanroom glove business.” 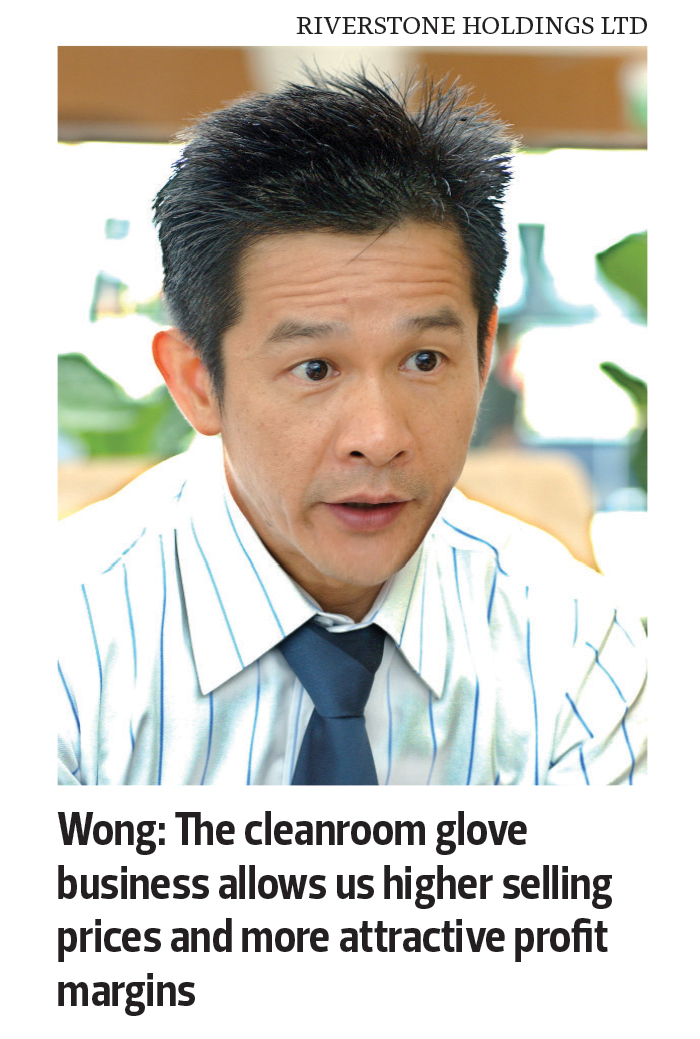 According to Wong, the capacity expansion plan is mainly for Riverstone’s plant in Taiping.

Overall, 15% of its production capacity is allocated to cleanroom gloves while the remaining 85% is for healthcare gloves. It is learnt that these production lines are interchangeable, so it gives the group flexibility to produce both types of gloves using the same line.

As at Sept 30, Riverstone’s cash and cash equivalents stood at RM427 million.

“That’s more than enough to fund our ongoing and future expansion plans. Bear in mind that our existing production lines will continue to generate profits and cash,” he says.

Although healthcare gloves take up 85% of the group’s production capacity, Wong says Riverstone will always prioritise its nitrile cleanroom glove business, which has been its core expertise and forte over the past three decades. 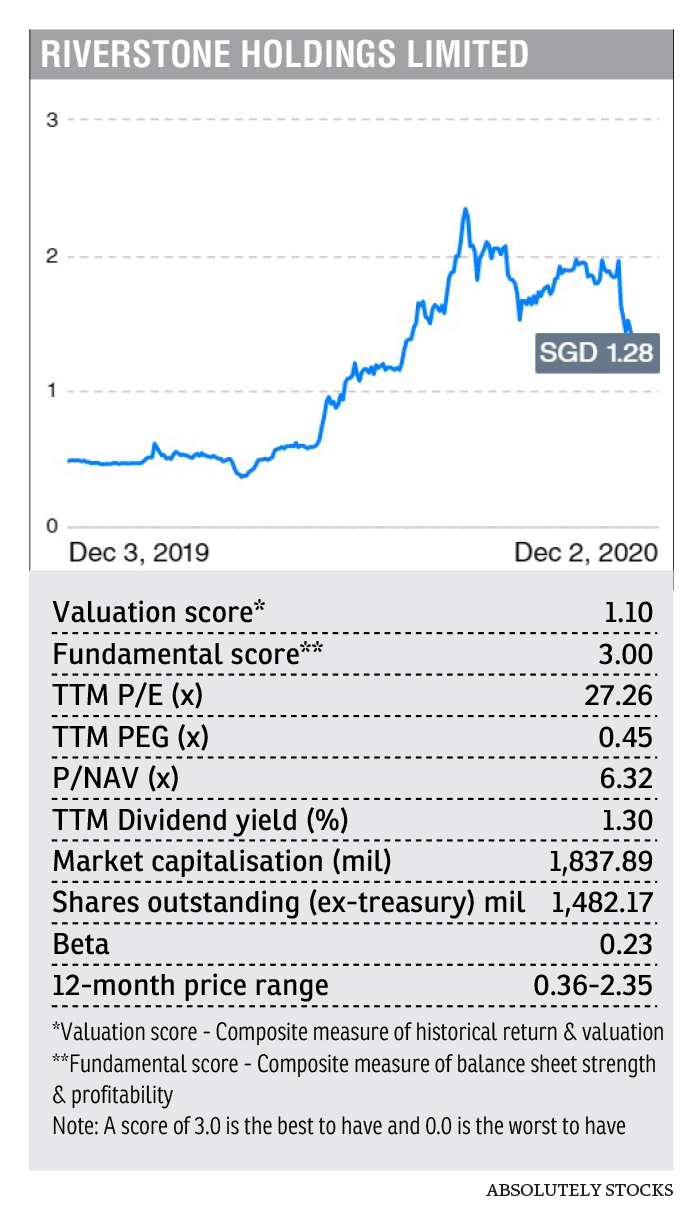 “The cleanroom glove business allows us higher selling prices and more attractive profit margins. We understand our clients’ requirements. We develop products together with them. We manufacture and distribute our cleanroom gloves using our own brand names and sell them directly to the end-customers. That’s our advantage,” he explains.

Wong recalls that Riverstone had focused mainly on nitrile cleanroom gloves from 1995 to 2008, before diversifying into the healthcare glove business following a sharp drop in demand for cleanroom gloves during the 2008 global financial crisis.

“Of course, we do have competitors. But compared with the healthcare glove business, the competition in the cleanroom glove market is less intense.”

Nevertheless, Wong acknowledges that 2020 has been an abnormal year because of the pandemic. Hence, it is difficult for investors to see the advantage of producing cleanroom gloves.

Riverstone generated a profit of RM316.2 million on revenue of RM1.109 billion in 9MFY2020, exceeding the group’s full-year revenue of RM988.96 million and profit of RM130.41 million in FY2019. Commenting on the results, Wong says he is quite confident that Riverstone’s financial performance will continue to improve quarter on quarter, at least until end-2021.

“Today, everyone is wearing gloves — the receptionist, policemen, people in the food industry — not just healthcare workers,” he points out.

As for cleanroom gloves, Wong says Riverstone serves the electrical and electronics (E&E), semiconductor and pharmaceutical sectors. “With or without the pandemic, this segment will continue to grow because these companies need to operate in a controlled environment. They need our cleanroom gloves to protect their products from contamination. They can’t use their bare hands or a dirty pair of gloves to work.” 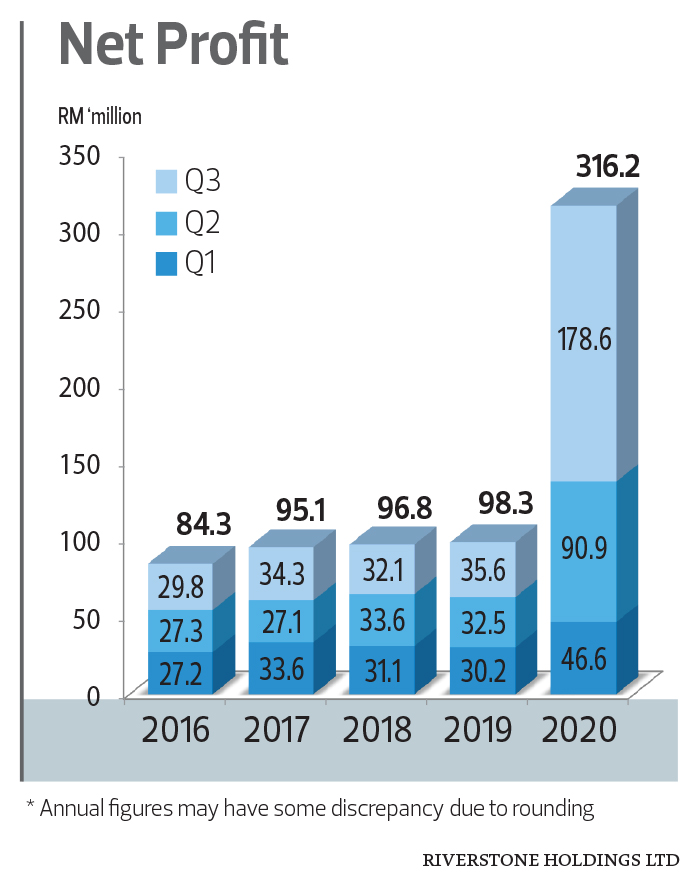 Since the outbreak of Covid-19, some of Riverstone’s competitors have diverted their capacity to healthcare gloves, but the group has decided to continue doing what it does best, he says. “Healthcare gloves are a more straightforward business. But cleanroom gloves are highly customised, which is why many glove companies do not want to go through the hassle of producing them.

“In our view, the E&E industry is booming now. So, there is currently a huge demand for cleanroom gloves.”

Riverstone saw its share price quadruple from 93.5 Singapore cents on Jan 2 to S$3.70 on Nov 6, before a one-for-one bonus issue adjusted the share price by about 50%. At last Thursday’s closing price of S$1.24 per share, the company was valued at S$1.84 billion.