Gloves makers: Dividends, buybacks and share dividends are the way to go

When I wrote my earlier piece (around April to May 2020) on the gloves, I think few sees what's coming. It was huge profits and prices but not even today's gloves price. Even during the early days some of the founders of the gloves makers were taking profits by selling some shares. (I remember Hartalega's Kuan and Kossan's Lim were selling (see below) some shares, and I do not think it was to mislead the market. Why would they?) Some of them bought back the shares later on. 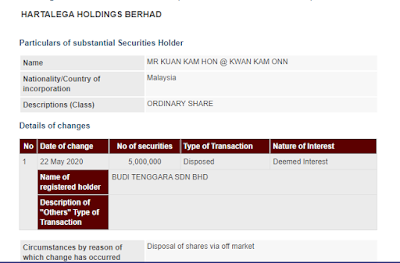 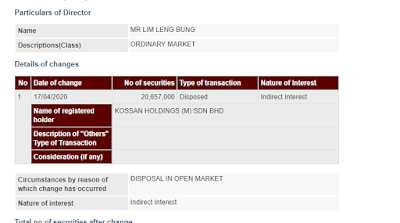 Today, and until today the prices of the gloves (not stocks but actual gloves) have gone through the roofs - up to 5x its previous prices. Whether these prices are here to stay, I think the big 4 gloves makers are not able to provide a definitive answer. What is more than certain is this. Top Gloves is probably expected to make Net Profits of around RM12 billion to RM13 billion for its FYE 31 Aug 2021. Remember it used to make around RM400 million to RM600 million during a normal year. That was close to 100x its market cap today. Again, to highlight no Malaysian company has enjoyed before such profits in a single year except for Petronas the parent company.

It is hard to predict whether how fast it will become normal again. What is known is this. Gloves used to be a 3D (dirty, dangerous and difficult) business where Malaysian workers would not want to be into. Some of the quarters as shown are outright not livable. Malaysia has been using foreigners for the business.

Today, because of the cashflows that they are generating the guys are doing it differently. They are investing huge amount on automation, improving living quarters etc. Those were not so possible in the past. Hence, these are the changes that we will see in the near future.

Despite having so much funds, it seems that the world because of the pandemic just do not produce enough gloves for consumption. For this period, it seems that it is hard to replicate the factories and move on to produce more just to meet demand. At the same time, the glove makers are generating so much cashflow - an amount they have not seen before.

Top Glove is expected to bring in net free cashflow of about RM10 billion in the next 12 months. These are funds they may not need in the near term. So what should they do about it. I know that people have been critical of them when in just a few days they have spend some RM220 million just to do buybacks.

I think given the funds that they have this is just what they should do. Glove makers do not need funds like the highway or O&G guys. All the gloves makers - large ones especially - should just do all the 3 - i.e. cash dividends, buybacks and share dividends or even cancelling out their shares.

They can be done variably. When they think the share price is cheap, do buybacks. When it is not so cheap, then as what Top Glove has announced, do a aggressive dividend disbursement. Imagine, if they make RM12 billion PAT, 70% is just RM8.4 billion. There is still so much funds as compared to the past for them to use it for operations.

I am not sure how long this kind of cashflow numbers will continue to be enjoyed but by doing the dividends and buybacks they are bringing the right value to its shareholders as well as cashflow into the system.