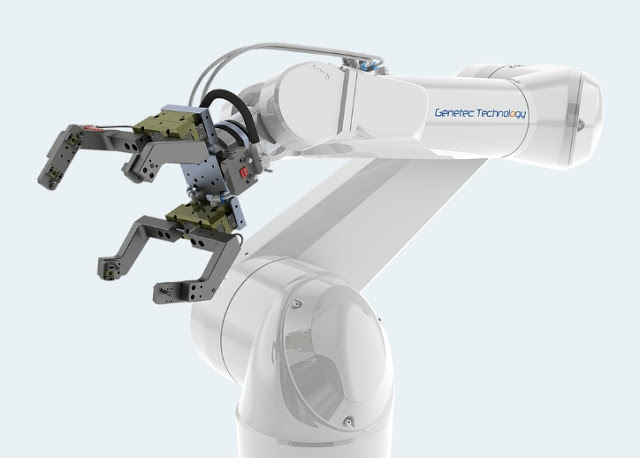 I'd say that their results were not up to the expectation of most investors.

Genetec's FY21Q3 PATAMI of RM0.89mil was a 66% and 90% drop QoQ and YoY respectively. This Q3 used to be its best quarter in previous 3 financial years.

FPGroup's FY21Q2 PATAMI of RM2mil was also not that good, but still slightly better than Genetec with a 35% & 57% drop QoQ & YoY respectively.

This quarterly profit is its lowest in the last 2.5 years.

JFTech's FY21Q2 PATAMI of RM4.0mil was a mere 0.15% improvement QoQ, even though its share price has taken a rocket ride from RM1 to over RM8 (adjusted for bonus issue) in less than one year time.

Despite a slight increase in net profit, its EPS actually dropped 1.7% QoQ due to increase in outstanding shares.

Under "normal circumstances", we would expect their share prices to be beaten down significantly until the release of next quarter result.

However, this is not the case in current tech-manic time.

JFTech's share price stayed flat the next day, climbed in subsequent 2 days to register a gain of 7.7% compared to the day of result announcement.

If we annualize its latest quarter net profit, EPS will be 1.73sen thus forward PE will be 105x at current share price of RM1.82.

Is this PE too high for JFTech? Well, as its net profit is still relatively low at around RM4 per quarter, it has every chance to double it in the future, especially when its business collaboration with Huawei bears fruits.

One of the main reason for JFTech's spectacular rise is because of its business collaboration with Huawei to develop, manufacture and supply test contactors to Huawei itself and other customers in China.

This proposal is expected to be completed by the first quarter of FY22 (Jul22 to Sep22). JFTech will hold 55% in the initial set up.

Nevertheless, it still needs time to see profit from the partnership.

FPGroup, who is involved in the same business with JFTech, was more "normal" in which its share price dropped 14% from RM1.05 to RM0.90 in the next 2 days after result announcement. However, it was able to reduce the loss to 9.5% a day later.

A new business of "automation" appeared in its financial report since FY21Q1. It registers marginal loss of RM4k with a revenue of RM2.2mil in 2 quarters.

Even though it might not contribute too much in the near future, I think it's a good diversification since automation is also something investors hotly chased after.

Genetec is a company involved in automation and it concentrates in automotive or electric vehicle segment.

After it released its lackluster result, its share price gapped down 10% at opening from RM4.39 to RM4.00 but was able to reduce the loss immediately to just 1.6% to close at RM4.32.

After another 1.5 trading days, its share price has gone up to RM5.81! This is an almost 200% increase since breaking RM2 level exactly one month ago. 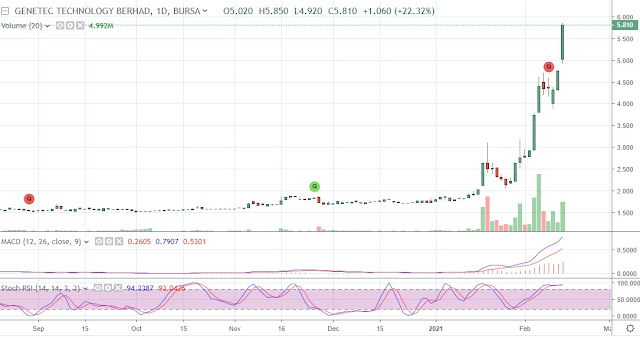 In the "Prospect" part of its latest quarterly report, the management mentions that the company is believed to benefit from growing trend of Electric Vehicles (EV). This might be the reason its share price flies.

We know that its main customer of EV is from China. Investors might start to imagine and relate to certain EV companies.

Actually Genetec did mention about its involvement in EV in its earlier quarterly report but its share price did not react like this. Perhaps Elon Musk hasn't become the richest man yet at that time.

Since the second half of last year, we have been talking that technology is in trend. I even wrote an article "Tech Stocks: Still Can Buy Now?" on 8th July 2020.

With this kind of title, it means that I already thought that tech stocks were expensive at that time, with PE ratio of over 30 for most of them.

I always assume that PE ratio of tech stocks should be between 15-30x. Now it seems like in special situation, it can be raised for good.

The reason I wrote that article was because I wanted to find out which tech stock was still worth to invest in during that high PE environment.

Finally I bought JHM in the end of Jun20 and then Genetec in early Aug20.

However, I can only shake my head seeing its share price "soared high" in last 2 days, as I have sold all its shares immediately after its recent "bad" result announcement.

I think I will continue to shake my head for quite some time.