THE election of Joe Biden as the 46th president of the United States has brought cheer to the renewable energy (RE) industry in the country. He has pledged to combat climate change under a US$2 trillion plan while creating millions of jobs at home in the green sector.

On Jan 27, the White House announced that Biden will ensure that the federal government leverages its buying power to procure carbon-pollution-free electricity, made in the US, to stimulate clean energy industries.

Once in office, he also cancelled the construction of the Keystone XL gas pipeline.

But among these stocks, only Greatech and Pentamaster can be deemed as potential beneficiaries of the Biden administration’s plan to boost spending on RE. This is because both are producers of technologies that are used to make PV cells, solar panels, power inverters and energy storage systems that will be needed in the US and other parts of the world. 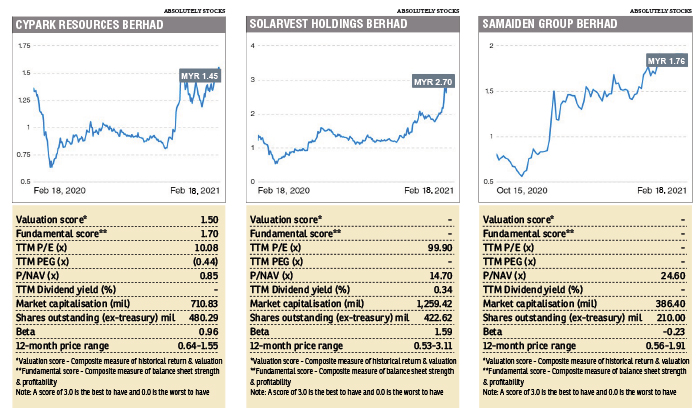 The rest of the companies are engineering, procurement, construction and commissioning (EPCC) players that build solar power plants, provide consultation services to industries on how to utilise solar panels to reduce their energy bills, and install solar panels on premises — all of which are dependent on the Malaysian market.

Nevertheless, observers say changes in the US will reverberate throughout the world, including in Malaysia.

In the executive order that he signed on Jan 27, Biden said the US will host a Leaders’ Climate Summit on Earth Day on April 22 and that it will also reconvene the Major Economies Forum on Energy and Climate (MEF).

The MEF is a series of meetings initiated by former US president Barack Obama in April 2009, with the aim of facilitating a candid dialogue among key developed and developing countries and helping to generate the political leadership necessary to achieve a successful outcome at the United Nations climate change negotiations.

The forum also seeks to advance the exploration of concrete initiatives and joint ventures that increase the supply of clean energy while cutting greenhouse gas emissions. The forum last met in July 2015 in Luxembourg.

Malaysia has had a National Renewable Energy Policy and Action Plan (NREP) since 2009, in which it targeted for RE to contribute 20% to its electricity generation mix by 2025.

To achieve this target, the government has awarded contracts to the private sector for the development of mini-hydro power plants and large scale solar (LSS) projects. For the latter, it has awarded a total of 1,634.21MWac of LSS projects throughout the country.

Last year, Malaysia opened the bidding process for the fourth cycle of LSS — known as LSS by Malaysian Electricity Industry to Attract RE Investment ([email protected] or LSS4) — with a total quota of 1,000MWac for the private sector to participate in. The project is expected to bring in RM4 billion of investments by the private sector.

Besides a comprehensive policy on RE as well as LSS projects, the Malaysian solar power industry has also been incentivised through the Green Investment Tax Allowance (GITA) and Green Income Tax Exemption (GITE), in place until 2023.

The government has been providing the Green Technology Financing Scheme (GTFS) since 2010. First introduced in Budget 2010, it provides government guarantees for 60% of the financing provided by financial institutions, and a 2% rebate on interest or profit rate charged by banks on the loans.

In Budget 2018, GTFS2.0 was announced with targeted financing of RM2 billion. However, the scheme — which covered the period between 2018 and 2020 — did not come with government guarantees and the 2% rebate on interest or profit rate charged by banks was only for the first five years of the financing tenure.

Under GTFS2.0, about RM900.58 million worth of financing was approved by banks and the government, significantly below target.

Under Budget 2021, the government has allocated another RM2 billion for GTFS3.0, which will cover 2021 and 2022. However, the programme is not yet open for applications, according to the GreenTech Malaysia website.

An investment banker tells The Edge that a lot of investments and financing have been provided by the government and financial institutions for the RE sector. Banks have taken an interest because the medium to long-term benefits of RE outweigh the costs.

“Banks are also working on various initiatives to incentivise households and businesses to increase the uptake of solar panels. The Covid-19 pandemic has put the brakes on all these plans as everyone needs to reprioritise but as soon as this is over and life is kind of back to normal, demand will be there and it will be here to stay,” says the banker.

He adds that Malaysia has set the right RE targets and tax incentives that have led to considerable interest from the private sector. “The market has seen a couple of solar-based sukuk and I am sure in the loans, there’s plenty more. There are a lot of solar players in the market and if we do it right, Malaysia can be a hub in this region.”

Malaysian solar players find a place in the sun, but valuations appear lofty for some

With the focus on the development of RE prioritised by the government, the industry — especially the solar power generation sub-sector — has been benefitting from the projects and incentives.

Cypark, for example, has been winning solar power projects since at least 2011. The group currently owns, operates and manages around 47MWdc of solar plants across the country. It plans to increase its RE project capacity to 200MWdc within the next two years.

On Oct 1 last year, PublicInvest Research upgraded its call on Cypark to “outperform” with a target price of RM1.84 per share, based on a sum-of-parts (SOP) valuation method. Its analyst, Nur Farah Syifaa’ Mohamad Fu’ad, says the discounted cash flow (DCF) value of Cypark’s RE business alone is already RM1 per share, with the segment to account for an eventual 43% of the group’s bottom line. 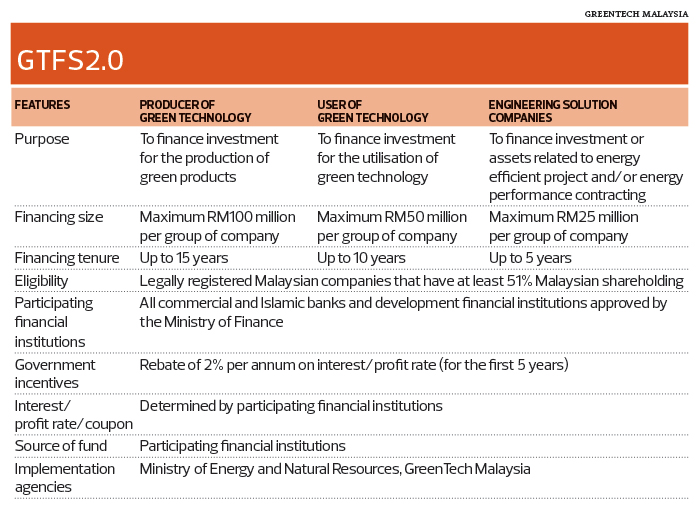 “We also tagged a PE multiple of 6 to 15 times for its non-RE business. At the current target price, it suggests a FY2021F PER of 9 times based on an EPS of 20.8 sen, which we believe is conservative compared to its peers that trade at an average PER of 15 times.

“We continue to like Cypark as it shifts its business model from short/medium-term contract-based revenue to a longer-term concession-generated income,” Farah says in the report.

For the financial year ended Oct 31, 2020 (FY2020), Cypark’s net profit fell 22.7% to RM70.6 million, on the back of a 19.3% decrease in revenue to RM304 million. This was mainly due to the total suspension of work activities between March 18 and June 9 last year during the first Movement Control Order (MCO) and Conditional MCO, and the restriction imposed on work activities during the Recovery MCO, which continued until year-end, the company said.

The decrease came mainly from Cypark’s environmental engineering sector, while its green tech and RE division recorded a 26.2% jump in profit before tax to RM28 million, owing to a change in the estimated useful life of its solar plants and further savings achieved in finance costs.

Another company whose share price has rallied over the past year is Solarvest. Since the low of 54 sen per share on March 19, 2020, the counter has rallied by 400% to last Thursday’s close of RM2.70 per share. 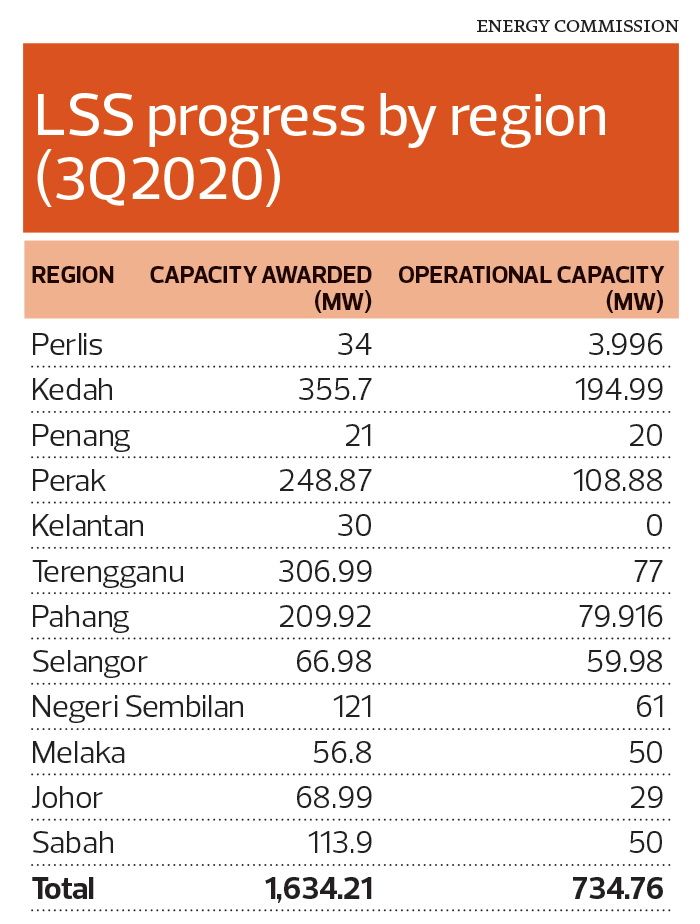 Unlike Cypark, there are no “buy” or “outperform” calls on Solarvest, with only RHB Research calling on investors to take profit with a target price of RM2.15 per share. “The global push towards clean energy and anticipation of the LSS4 tender results saw the stock rallying circa 60% year to date,” Loo Tungwye and Lee Meng Horng say in a Feb 15 report.

“Overall demand for solar energy remains strong in Malaysia. Solarvest’s current valuation of 50 times fully diluted FY2023F PE is lofty and has more than priced in the potential upside from our blue-sky scenario,” they add.

Loo and Lee say Solarvest could experience slower progress billings in 2HFY2021F for a few commercial and industrial projects. The increase in solar panel prices in 2HFY2021F may see some margin compression in the near term, they add.

“In addition to the EPCC work, the potential earnings as a 50MW LSS4 solar plant owner could see an additional RM8 million profit per annum. Nevertheless, earnings contribution from this is unlikely to kick in by FY2022F to FY2023F as the plant will still be under construction,” the RHB Research analysts say.

Solarvest’s growth story comes from its intention to become an asset owner by participating in the LSS4 tender. So far, the company has only been an EPCC partner to solar power plant owners — for example, it was involved in a contract from Southern Cable Group Bhd to install a 2.7MW-peak rooftop solar system at the latter’s cable and wires manufacturing facility in Kuala Ketil, Kedah.

Solarvest is also looking to expand its EPCC business outside of Malaysia, and has set its sights on Taiwan and the Philippines.

Bursa Malaysia debutant Samaiden does not have any analyst coverage at the moment. However, since its listing on Oct 15, 2020, the counter has rallied by more than 267%. The stock debuted at 48 sen per share, and was trading at RM1.76 per share as at last Thursday.

Samaiden is another EPCC company in the solar power industry. In the first quarter ended Sept 30, 2020, it recorded net profit of RM1.02 million, on the back of RM11.23 million in revenue, mostly from the provision of EPCC services.

Given the rally in share prices, the stocks have started to lose steam. Since reaching its 52-week high of RM1.60 per share on Jan 19, Cypark’s share price has fallen 9.4% as at last Thursday.