THE National Property Information Centre (Napic) released its 2020 market report last week, and other than the headline numbers in terms of transaction value and volume,

Napic also released the much followed overhang statistics. The data showed that the Malaysian property market remained under the cast of a long shadow, of not only the overhang segment of the property market, but in addition to that, the planned incoming and future supplies. Interestingly, Napic statistics this time also included statistics in relation to service apartments under the commercial sub-segment, which was rather telling.

First, the good news, well, at least, sort of good news. The residential overhang has more or less plateaued based on the total number of residential overhangs at the end of 2020 at 29,565 units valued at RM18.9bil. Chart 1 shows that the trend within the residential segment is more or less stable although in general this is not a small number to be proud of or to be contended with as every unit that is unsold remains in the developers’ inventory and strains a developer’s cashflow. 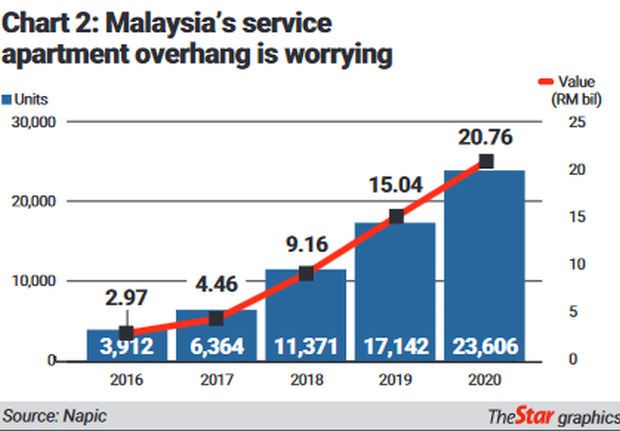 While the overhang status within the residential segment seems to be here to stay, investors, developers and the market in general should be more concerned about the status of the service apartment overhang, which has grown by leaps and bounds over the years and has caused serious damage to the overall health of the property market as a whole.

Taken together, the overhang status of both the residential and service apartments has now reached a new high of 53,171 units worth some RM39.69bil. Add the SoHo units into the equation, which had some 2,129 units valued at RM1.12bil, and the grand tally for all is now at 55,300 units worth some RM40.79bil as at end-2020.

The problem for the property sector does not stop there. What is even more worrying is the pipeline of supplies that is coming onstream. Perhaps, the unsold and not constructed segment may not be that material, as these units may or may not begin construction at all if sales do not reach a certain scale to make them viable. Nevertheless, the unsold and not constructed segment from residential, service apartments and SoHo units is not small either as in total, there were 21,250 units worth some RM12.26bil as at end-2020.

However, the unsold and under construction segment is a different picture altogether. Table 1 summarises the current status of this segment.

With more than RM101bil in terms of unsold properties, be in completed or unsold and under construction, the overall picture for the market is indeed blurry and fuzzy as developers, while upping the game in terms of new launches and targeted sales, have left the market flushed with choices in the form of completed units as well as those units that are under construction.

Selling in a market when supply is in abundance is a really tough call for property players as statistic in 2020 also showed how poor sales have been among new launches. According to Napic, some 47,178 units came to the market in 2020 in the form of new launches, and out of this, sales barely reached 30%. Sales for the high-rise segment was relatively poor with just 24.8% of the total 19,331 units that were launched being sold, while for the residential segment, a sales rate of 31.5% was achieved.

The grossly oversupplied property market is not only weighing on developers in the primary market segment, anecdotal evidence from the secondary market tells almost the same story. Secondary prices have generally been weak in most geographical areas while rentals too have been poor with rental rates at best staying at previously contracted rates or worse, trending down. The oversupply situation in the Malaysian property market is a growing problem, as we have too much supply and the market is not there to absorb this supply to the extent it is impacting and depressing prices in the secondary market. Rental yields too are under pressure as the renters are spoilt for choice while owners are desperate just to lease out.

The higher-end segment is impacted the most as we lack the natural growth of expats coming to Malaysia and paying the kind of rent that some of these properties used to command. This segment also suffers from relatively low local demand as not many Malaysians would be able to pay rents that are in the high four figures or in tens of thousands per month.

There have been previous calls for regulators to tighten the rules and issuance of development orders for new residential or service apartments, but alas, sad to say, the call has fallen on deaf ears. The RM101bil problem is a growing problem and if the authorities do not clamp down on new launches, we will soon be having a larger bubble in the form of unsold units and this could have detrimental impact on property developers as well as financiers who are readily giving out bridging loans to these developers.

Effectively, the residential and commercial segment saw total overhang alone leapfrogging from 17,073 units valued at some RM8.28bil in 2015 to 62,204 units worth some RM46.44bil as at the end of 2020. A 3.64-fold increase in the number of units and a staggering 5.6 times in value in just five years.

Aren’t these numbers not scary enough for authorities to clamp down on new launches and rein-in the developers from continuous and unabated launches, especially in geographical locations where the supply is in abundance? Should the developers not be mindful of these statistics when venturing or launching new sales? Or at least, the banks, who are providing facilities to both developers in terms of funding and buyers in terms of end-financing, to be more vigilant as unsold properties to the tune of RM101bil is no walk in the park. Surely, common sense should prevail, or would it not? Time will tell.

Pankaj C Kumar is a long-time investment analyst. The views expressed here are his own.