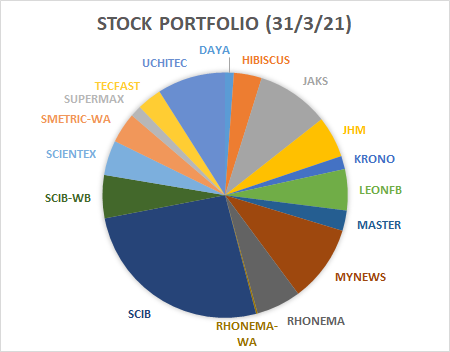 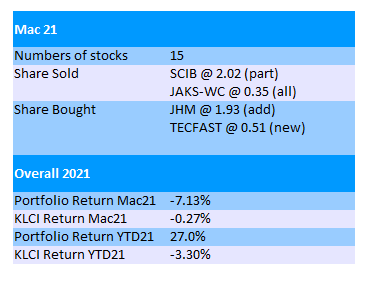 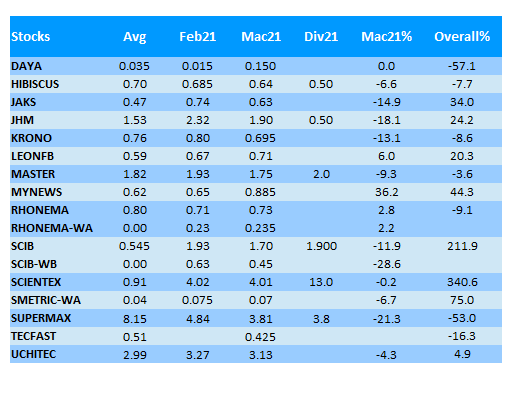 In general, March 2021 is not a good month in stock market. My portfolio lost 7.1%, mainly due to the decline of my major holdings SCIB & Jaks.

Taking some profit from SCIB earlier in the month helps to reduce the percentage of loss.

I still hold quite a lot of SCIB shares. I believe the company can continue to grow in 2021 and hope that it can achieve its RM2bil market cap target by the end of this year.

Jaks just released a bad quarter result with a shocking RM103mil loss after tax and minority interest in its FY20Q4. Its loss before tax for the quarter is RM183.5mil.

However, there are reversal of disposal gain (RM85.3mil), impairment loss of goodwill (RM52mil) & receivables (RM23.6mil), share grant plan expenses (RM17.1mil) and loss on disposal of investment properties (RM5mil) in this quarter alone.

After deducting all those bigger items above, its actual loss before tax is just RM0.5mil in the quarter which is not too bad.

Jaks recorded a share of profit of RM7.568mil in its Vietnam power plant JV. It's derived from 37 days operation from only one of its two units of power generators.

It's better than what I expect since it has not achieved "economy of scale" yet.

The problem is, will those one-off losses become two-off and three-off?

Jaks has won the bid for 50MW in LSS4. However, market seems to punish those winners as there are concerns of lowish bidding price and temporary rise in project cost.

Most technology stocks take a breather in March after a strong run in Jan & Feb this year.

I took the opportunity to add a bit more JHM's shares, since Kenanga Research portrays a very bright future on it.

Krono released a commendable quarter result in March but the announcement of private placement is no good news to its shareholders.

In the prospect of its latest quarter report, the management mentions that "we expect that 2021 full year revenue growth to be high end of healthy range."

Even though I don't know what "high end" and "healthy range" here mean, it certainly sounds good and I choose to keep its shares.

Will the market still give tech stocks higher than usual PE in 2021 and beyond? Or will they go back to PE of 15-25? I don't know. Perhaps for high growth potential tech stocks, the PE will continue to stay high.

If the tech stocks frenzy cool down significantly, then my Uchitec will probably become "Uncle-tec" boring dividend stock. 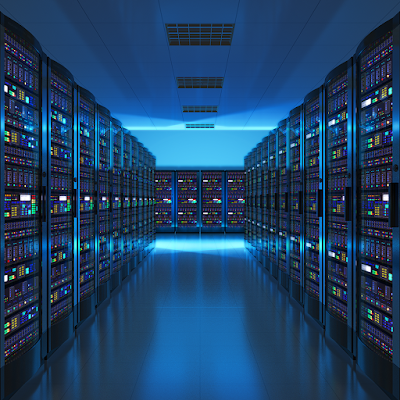 Tecfast is the latest addition into my portfolio but it does not look like a good move, isn't it?

Even though there are some negatives and accusations surrounding Tecfast, there are a few reasons that affect my decision to buy its shares.

One of the reasons is that when I have more cash on hands, it's always easier for me to make a buy decision which might turn out to be right or wrong.

I chose to believe that the company is doing real business. After venturing into oil trading and bunkering, Tecfast becomes only the second listed company in such industry after Straits Inter Logistics.

In FY20 ended Dec20, Straits's oil bunkering segment posted a PBT of RM7.6mil from revenue of RM662mil, which means the PBT margin was only 1.15%.

Without the contribution of CCK and those 2 big contracts, Tecfast's new oil bunkering segment posted a net profit of RM13k out of RM4.017mil revenue in only one month (PAT margin 0.3%).

Its share price has staged a rally in Mac21 from 17.5sen, probably due to the news that its 38% owned associate company Banle Energy is preparing for IPO in Hong Kong Stock Exchange.

MyNews is no doubt the best performer in my portfolio in Mac21. I'm not too happy because I haven't accumulate enough of its shares...

Anticipating a bad financial result announcement in Mac21, I expect its share price to stay weak before and drop panically after the quarter result so that I can get more cheaper shares.

It proves that I was so wrong. Market is so forward looking nowadays.

With the opening of CU stores yesterday, its share price jumps above RM1.

Supermax's share price consolidates above RM4 level in Mac21 but recently it seems like it might start another round of fall. I can only hold on to this "long term investment".

Time flies and one quarter of "recovery year of 2021" has passed. So far I manage to hang in there and hope for a good Q2 ahead.