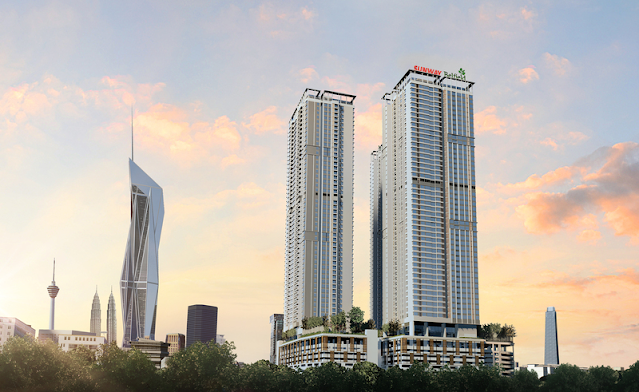 In September last year, I wrote something about property investment again: When Is The Next Property Boom, after ignoring it for so many years.

One month later, there was another post about property, Property vs Stock Market Investment.

These two posts were written mainly for one person, which was myself. I wrote to convince myself to go ahead with my plan to get another property.

Since the return of HOC (House Ownership Campaign) in Jun20, I started to explore the possibility of investing in a property.

I was actively looking for a good deal and I finally found one new project in Oct20.

The project is known as "Sunway Belfield" located at Jalan Istana/Jalan Belfield in Kampung Attap. It is opposite the old Istana Negara and is within walking distance to Merdeka 118 tower in Kuala Lumpur.

That's why I wrote about Merdeka 118 development in Jan21.

I always have a plan to purchase a property in Klang Valley, especially in KL city center. Before I purchased my first investment property around year 2010, I studied properties in KLCC, KL Sentral, Bukit Bintang & Ampang.

However, I couldn't get one due to affordability and logistic issues. So I just concentrate in properties in Penang.

Previously I had strong interest in "The Robertson" by Gamuda in Pudu and IJM's Canal City (current Bandar Rimbayu). I wrote about them in this blog as well, but I didn't try hard to purchase them.

The possibility to get a property in KL city center slowly fades away as my age grows, until Covid-19 pandemic and HOC offer some hope.

Now, knowing that Merdeka 118 will be a new landmark in KL, I purposely looked for development projects around this area and finally found Sunway Belfield in Oct20.

I registered my interest and have to wait until Dec20 for it to launch. I booked a unit despite realizing that I could not get 90% loan.

The price of Sunway Belfield started from RM590k for the smallest 788 sqft unit. This works out to be RM750 psf.

It has 5 layouts ranging from 788 to 1337 sq ft. For further details please go to Sunway's website to find out.

To me, I think the fair price in this location should be RM1000 psf. The Robertson in Pudu, Lucentia Residence in Bukit Bintang City Center, Opus KL at Jalan Belfield and Riveria City at KL Sentral are all well above RM1000 psf.

Once the Merdeka 118 tower & its shopping mall are completed in 1-2 years time, Sunway Belfield might have good potential to appreciate in price.

Opus KL (357 units) which has unobstructed view of Merdeka 118 tower and is just a stone's throw away from Sunway Belfield, was launched in 2016 at RM1,100 psf for unfurnished unit & RM1,600 psf for furnished unit.

So, it's considered quite high density in a 4.53 acre land and those 3 towers are really skyscrapers at 55 & 56 storeys.

It's almost similar to Star Residences near Petronas Twin Towers in KLCC, which also has 3 super tall buildings at 57 storeys each. This premium development was launched in stages from 2014 to 2016 at RM1700 psf according to PropertyGuru.

Unlike Star Residences, there will be no retail shops below the buildings of Sunway Belfield. Some people might not like it but I'm OK with that.

There are a few empty lands surrounding the site of Sunway Belfield. The land between Sunway Belfield and Merdeka stadium belongs to Salcon, according to Salcon's 2014 annual report. 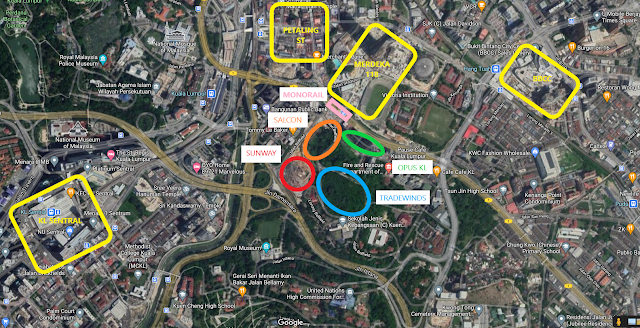 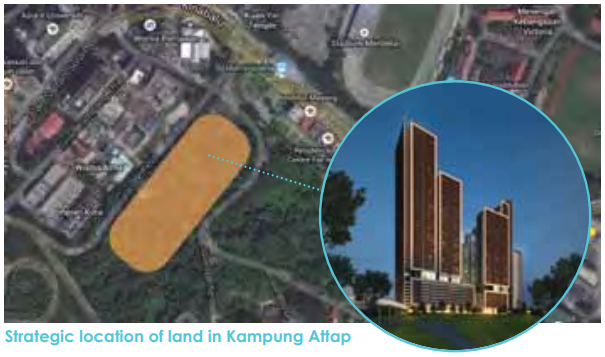 Salcon has a plan for a mixed development with retail, office space and service apartments there known as "Belfield Crest". Thus, Merdeka 118 tower view of Sunway Belfield might be partially or completely blocked in the future.

From its website, Tradewinds previously has a plan to build luxurious high rise apartment residences & premium low-rise retail avenue at this 12.2 acre land known as "The Belfield". 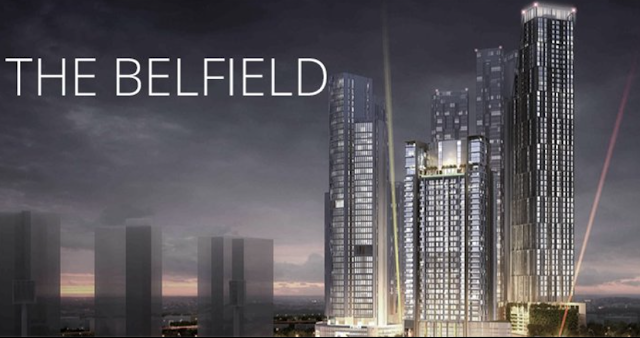 Of course those plans by Salcon and Tradewinds have been put on hold due to weak property market and might be changed in the future.

Once Salcon & Tradewinds launch their projects there in the near future, I don't think the price will be lower than RM800 psf as I believe we are currently at the bottom of property cycle.

Tower A of Sunway Belfield was more than 80% sold within 2 months and Tower B is opened for sales now. From Sunway's advertisement, price of Tower B starts from RM650k or RM825 psf. So that's 10% increase in price compared to Tower A.

Even if Salcon & Tradewinds launch their projects at the same price as Sunway Belfield, Sunway Belfield has an advantage of being freehold compared to leasehold for the other two.

Salcon's land has better location as it's nearer to Merdeka 118 and monorail station. Salcon might be waiting for Merdeka 118 tower and its shopping mall to be completed in 2022 before launching its project there.

At that time, I don't think it will sell for anything below RM1000 psf even though it is leasehold. If it does go for below RM1000 psf, then I think my investment in Sunway Belfield will become less attractive.

The total maintenance fee & sinking fund is estimated to be 29sen psf, which I think is not too high for such location.

The main facades of Tower A & B face either northeast (Merdeka 118/KLCC/Bukit Bintang) or southwest (KL Sentral/PJ/Bandar Malaysia).

There are huge cemetery grounds in the south and southeast direction. Some people might not like it and it's considered as a disadvantage of this project.

To me, southwest-facing Tower A units are the best as there is unobstructed view even though there is cemetery view. It's better than facing other units of adjacent buildings such as Tower B & C of Sunway Belfield, possible future buildings by Salcon & Tradewinds.

Many developments around this area, including KL Sentral, Bandar Malaysia and Mid Valley will have such cemetery view. It's an unobstructed green & blue skyline for those who are not pantang.

Within the Merdeka 118 development itself, there will be 3 blocks of premium residential towers "Merdeka Residence" offering up to 800 units right next to the iconic tower.

There is no perfect development project. Apparently I think that pros are more than cons in Sunway Belfield, that's why I decided to purchase a unit here.
It doesn't mean that it's surely a correct or wise decision. Just like buying shares in stock market, I made bad decision too.
My investment in Sunway Belfield is less than ideal because I can only get maximum 70% loan. I need to fork out a big amount of cash.

Some people might say, if you want to invest in real estate, why don't you just buy the shares of property developers or REITs? Stock market is easy in easy out and it will save us from lots of headaches arising from tax & tenants.

This suggestion makes sense to me as I can't get maximum leverage from 90% or 100% loan.

Since I need to pay for ~30% of the property price in stages, I'd assume that I use those cash to buy shares in Sunway OR Sunreit, and see which investment turns out better in long run.

My entry price will be the share price on the day I make the payment. The amount of shares that I buy will be based on the amount of payment I make.

I have settled the first 10% and will pay the next 10% soon. I shall make the first comparison when I got the keys of Sunway Belfield, probably in 2024 even though 48 months are given for completion in SPA.

By that time, I might sell it, rent it or make it my holiday home if financially allowed. Definitely I prefer the latter.

I'll publish the comparison of buying Sunway's shares, Sunreit & Sunway Belfield here, if this blog is still alive by then.