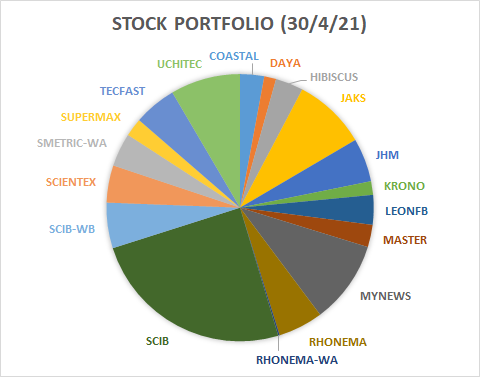 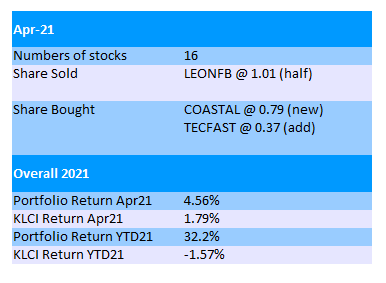 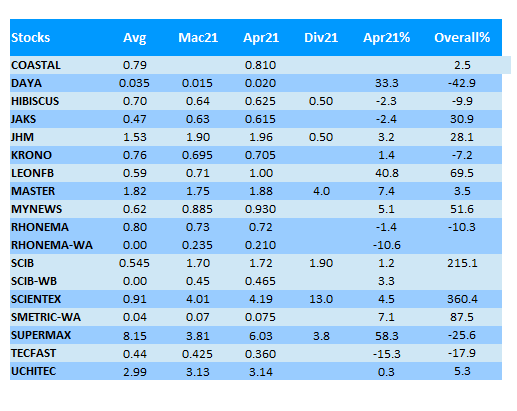 Time flies and we are almost half way through the "recovery year" of 2021.

In the final quarter of year 2020, I was optimistic about recovery from the pandemic in 2021. I visualized that in the middle of 2021, we would lead an almost "normal" life.

Perhaps due to the start of vaccination program since February and significant drop in new cases in March, people are getting more slack in adhering to the SOP.

Anyway, the pandemic will be over one day. Year 2021 might be a transition year while 2022 will be a real recovery year in term of our daily activities.

Stock portfolio performance wise, it's a "not bad" month for me in April, as overall portfolio gains 4.56% in a month.

Gloves stocks staged a rally in April due to the surge in Covid-19 cases not only in Malaysia, but the whole world especially India.

The continuous rise in steel price pushes the sentiment in steel stocks which has benefitted LeonFB even though it is a downstream player.

I sold half of LeonFB shares as it reached RM1.01 which is a 100% gain from my initial entry price of 50.5sen before I averaged up in Feb21.

The reasons I topped up 2 months ago was because of the robust demand and expansion plan of the company, even though the profit margin may not sustain.

My first investment in LeonFB was back in Nov16 at 50.5sen. Its share price rose to above 90sen in around one year but I didn't sell as I chose to hold long term for its new welded steel pipes plant to be completed in 2-3 years time.

However, its share price dropped slowly back to below 50sen after reaching peak in early 2018. The phase one of the new plant was completed in mid-2019 and has contributed significantly in FY2020.

It is currently working on the next 2 phases which is expected to be completed in 2 years time. Production capacity will surely be higher but should I wait for another 2 years?

One trading day after I sold half of my LeonFB shares, its share price surged 20% today. WT#!

Tahsin has just released a superb profit for its FY21Q1. I guess LeonFB who is involved in the same business might do the same.

If Tahsin releases its report earlier, I wouldn't have sold LeonFB shares. 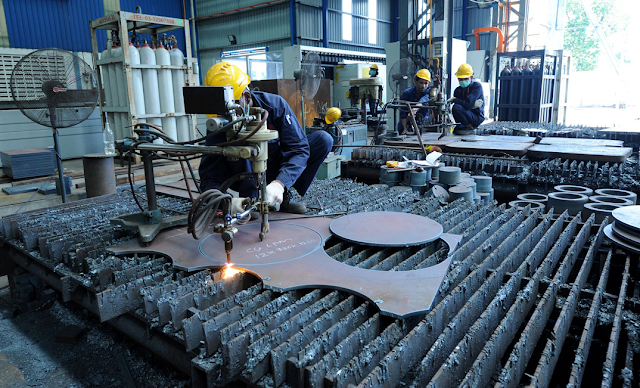 Its revenue and profit are supported by long term JUGCSU charter contract in Mexico. It has strong balance sheet and good cash flow, and should be profitable if not because of forex losses due to depreciation of USD against MYR.

The OSVs market seems to be in oversupply currently, so I don't expect a sudden surge in profit due to delivery of high-end OSVs.

Coastal ventured into liftboat charter business after completed the acquisition of 80% of Elite Point Pte Ltd on 11 Feb 2021. It has a remaining charter contract value of RM67.3mil over 20 months in the Middle East for its only liftboat.

Besides, it also signed an agreement in Feb21 with a Mexican partner to form a 50:50 JV to undertake an onshore gas sweetening plant project in Mexico which involves EPCC, operation and maintenance of the plant.

I like these moves made by Coastal even though there are risks involved. If something goes wrong, the increasing debts, impairment and depreciation charges might kill the company. 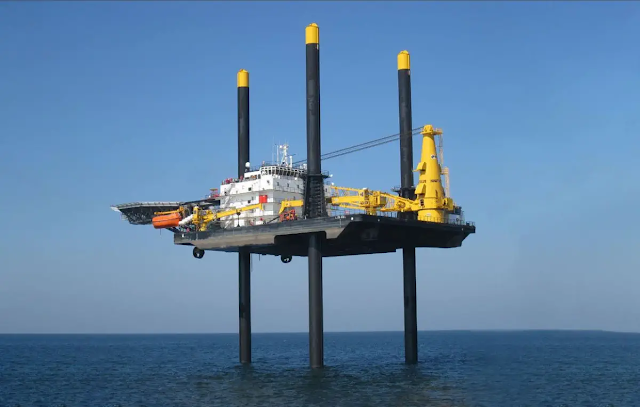 Tecfast is the worst performer this month, with a decline of 15%. Initially I bought its shares with a belief that it will concentrate on doing its oil bunkering business but the announcement of share split and rights issue with free warrants is not what I expect.

It's a dilemma whether to keep its shares or sell at a loss. I think I'd better wait for its next quarter report.

myNEWS share price once reached RM1.10 after opening its first CU store on 1st of April. Its share price retreated to 89.5sen today as MCO 3.0 is looming.

I might want to add more myNEWS shares since I think that I still haven't got enough. It will only release its next quarter report in June, and it should still be a bad one.

It will open its second CU store very soon in Puchong. After that, it will be average one new store every 1-2 weeks if it were to open 30-35 stores in a year as planned. 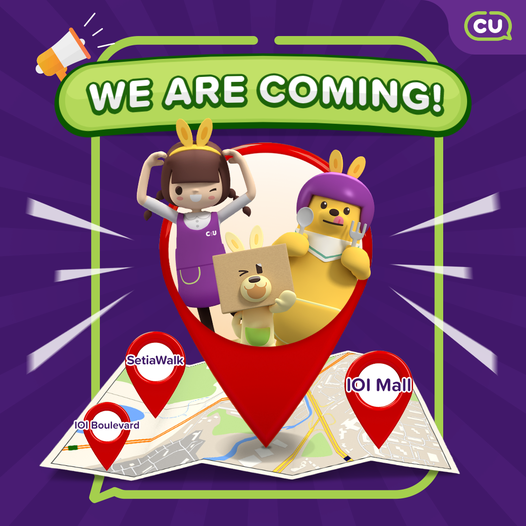 This month of May is the month of quarter results announcement. My main focus will be on Jaks & Tecfast.

As mentioned in portfolio review last month, I expect profit sharing of ~RM30mil from the Vietnam power plant to Jaks. Lets see how the real figure turn out to be.

As for Tecfast, expectation is not high as those big oil bunkering contracts secured in the final 2 weeks of Mac21 will not contribute significantly to its FY21Q1. I'm eager to find out how well its on-going oil bunkering business is expanding since just started in Dec20.

Hibiscus should do well as Brent oil price has gone up steadily from USD40/bbl in Nov20 to USD70/bbl in Mac21. Its average selling price in FY20Q4 was just around USD40/bbl.

Ironically, the share price of Hibiscus which is the direct beneficiary of increasing crude oil price has been dropping to 62.5sen since touching 75sen in Feb21.

Anyway, there will be dilution from conversion of CRPS and I'm still waiting for news of assets acquisition from Hibiscus.

I expect SCIB to post an improved CORE net profit QoQ. It won't beat its net profit last quarter as there was a RM17.7mil one off gain.

Private placement is under way as expected to fund its operation involving billions worth of contracts.

I expect Coastal to turn profitable in its upcoming quarter as forex is favourable to it recently. Its peer TAS has delivered a good quarter result in most recent quarter which saw it delivered a few OSVs. Its share price jumped almost 50% in less than 2 weeks.

Of course I don't know whether Coastal can deliver any OSV in its upcoming quarter after drawing blank in the last 3 quarters. I hope there is some backlog in delivery.

Both Uchitec & Master are similar type of companies to me. Their growth might be slow but I think the downside risk is low too. I'll probably keep them like in fixed deposit and when I need extra fund, I hope that I can sell them immediately without incurring loss.

So far my YTD portfolio return still manage to stay above 30%, but it seems more and more difficult to maintain at this level before the end of the year.