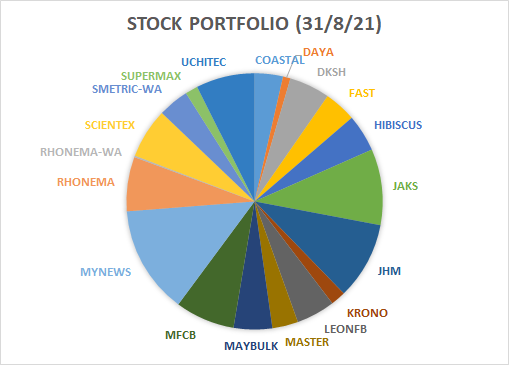 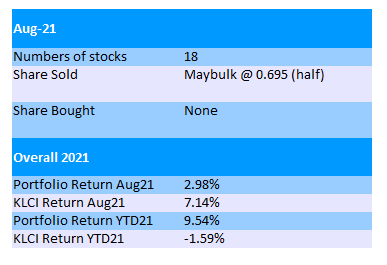 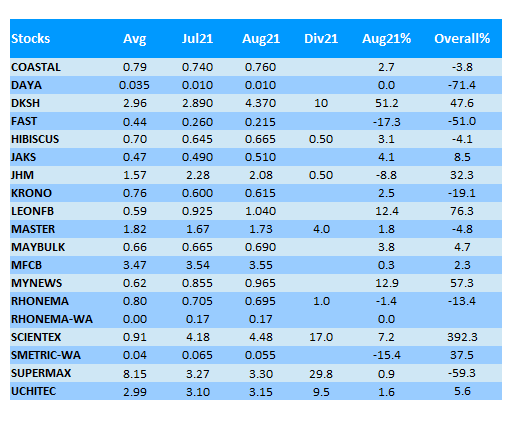 In the same month, our Covid-19 vaccination rate continued to be encouraging but new Covid-19 cases soared and stayed above 20,000 cases per day.

As of today, it's reported that over 65% of adults population are FULLY vaccinated.

Even though we're not sure whether the vaccines can successfully fence off the virus mutants, we should be able to achieve 80% adult vaccination mark at the end of this month.

Stock market wise, my monthly portfolio return of 3% was beaten by KLCI's 7% gain. 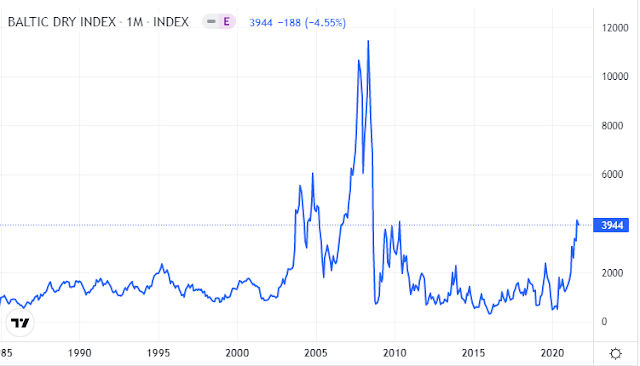 However, there are one-off gains of RM6.5mil from disposal of a Handysize vessel, and RM6.9mil from derecognition of a JV.

Even without those one-off gains, its profit before tax of RM18.7mil is still better than the preceding quarter of RM15mil.

It's already expected that Maybulk was in the midst of disposing this Handysize vessel but now it announced that it will dispose another two 7-year-old Supramax vessels.

I guess this does not go well with most investors and as a result, its share price fell the next day.

To me, I'm quite disappointed with the company's decision since the BDI is in a good territory and the charter rate of Supramax has advanced significantly. 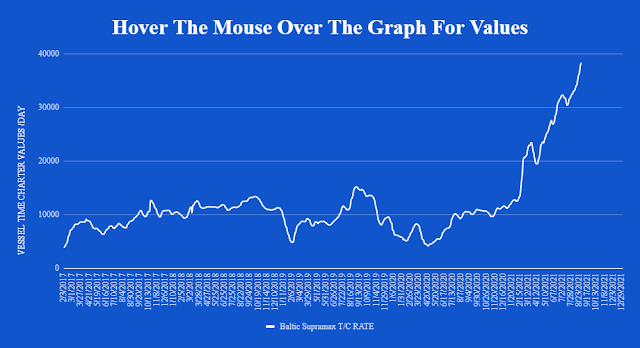 It's like killing the geese that lay golden eggs.

I invested in Maybulk mainly because I predicted that BDI could go up and stay higher for a longer period of time.

Now obviously the company's decision is not what I have hoped for. I have a plan to promote Maybulk to my core portfolio but now it seems like I have to reconsider it.

Anyway, I don't mean that the management of Maybulk made a bad decision. They are in the business for so long and they should do what is best for the company.

Disposing the older vessels when the market price is high will generate immediate cash flow and reduce its debts. Who knows the BDI will crash within one year together with the value of the vessels?

After the sales of two Supramax, Maybulk still have 5 vessels and it should remain profitable throughout the year.
The profit from the sale of vessels, even though it feels like "one-off" gain, is actually a genuine gain from its core business.
Next quarter's result should be very good with more disposal gain.

Since the BDI is still in the uptrend, I decided to sell only half and kept the rest to see what would happen next.

This is my only transaction in the month of August. 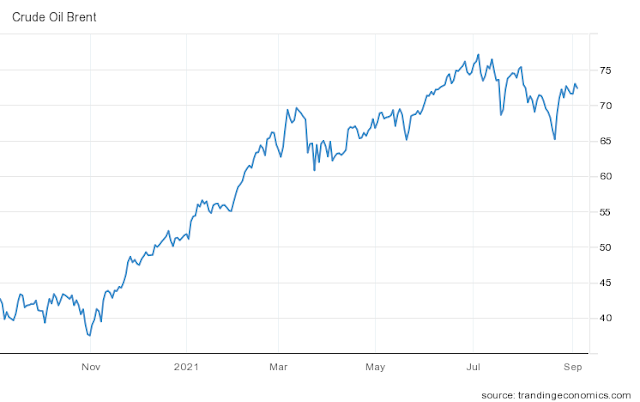 After a dip in mid August, Brent crude oil price recovers well to stay above USD70.

The FY21Q2 result of Hibiscus is very good as expected with EPS of 2.5sen.

If the Brent crude oil price can stay around USD70, Hibiscus should have no problem to duplicate this result for subsequent quarters.

I think a target price of RM1 for Hibiscus is fair, isn't it?

Again, Uchitec has achieved a historical high Q2 result by a huge margin, after doing so in previous Q1. It's better than what I expected.

The first 2 quarters are usually the "poorer" quarters of Uchitec in recent years. So I'm anticipating its second half performance with optimism.

Nevertheless, the management is still expecting only a "high single digit" revenue growth in USD for FY2021, even though its revenue for the first half in RM is already higher by 33% YoY.

Does it mean that the revenue of second half will be significantly lower? I hope the management is being very conservative in addressing its prospect.

Master reported a good FY21Q2 result even though the quarterly revenue of RM38mil is still nowhere close to its peak of over RM50mil in FY19.

However, it might face challenges since the raw material price has been in upward trend.

For Supermax, Smetric and Rhonema, there is nothing much to talk about since there are no surprise in their latest results.

There is also not much surprise in MFCB's latest FY21Q2 result, with QoQ and YoY improvement in its profit.

The acquisition of 75% of Stenta Films was completed on 28 July 2021 in which its profit will start to appear in MFCB's account next quarter.

MFCB has "warned" that FY21Q3's electricity sales will be lower YoY due to longer yearly scheduled turbine maintenance.

Nevertheless, the management remains "hopeful" that the construction of 5th turbine will start before the end of year 2021.

To me, this is a very positive news.

MFCB has a good presence in Indochina region which I think has great potential in the near future.

Tecfast, which is now Fast Energy, is so far my worst investment. I should have cut lost much earlier when it announced its "red-flag" type of corporate exercises.

I'm still undecided whether to subscribe to its upcoming right issues.

DKSH's FY21Q2 EPS of 16.1sen is much better than my expectation, even though there was an unknown amount of one-off tender delivery in its logistics segment.

The better result is largely due to organic growth with better margin, and its borrowing has been pared down by RM100mil in the first 6 months of 2021.

Its share price went limit up the next day after its result announcement. It went up too fast and I still have not get a chance to buy the second batch of its shares.

I think I have to raise my personal target EPS for DKSH from 40sen to 50sen for FY21.

Its share price was once traded above RM6 in year 2016. There is no reason to think that it can't revisit that level if it can maintain this performance in the second half this year.

Besides, recently DKSH was appointed by the Ministry of Health as the official distributor of CanSino Covid-19 single-dose vaccine nationwide.

The first delivery of 200,000 CanSino vaccines out of 3.5 million doses ordered by Malaysia, has arrived in the end of August.

I don't think this will contribute significantly to its bottom line though.

Meanwhile, Coastal, JHM & LeonFB will postpone the release date of their quarter reports to September.

Coastal should deliver a lower QoQ result since USD/MYR rate was quite flat from Apr21 to Jun21.

I expect JHM to report a better result partly contributed by one-off gain, while I don't expect LeonFB to surpass its brilliant result in previous quarter.

For the last few months, I was too busy and tired with my work and rarely look at the stock market.

I also do not read the comments from public forums anymore as I think that there are too much noise there.

There is also not much drive to write in my blog as it seems like I have nothing to write. I guess the recent "boring" stock market and poor portfolio performance must have contributed to this.

Sometimes I feel like I can write a post everyday and sometimes not even a single one in a month.

Perhaps it is quite normal for any blogger which are not profit-orientated.

So far my portfolio does not perform too bad with a 10% gain year-to-date. I'm still optimistic to stay in positive territory until the end of the year.

I'm more cautious in buying shares and my cash ratio has grown quite a bit.

Still with 18 stocks in my portfolio, I think it's too many and I should seriously execute my plan to cut it down.