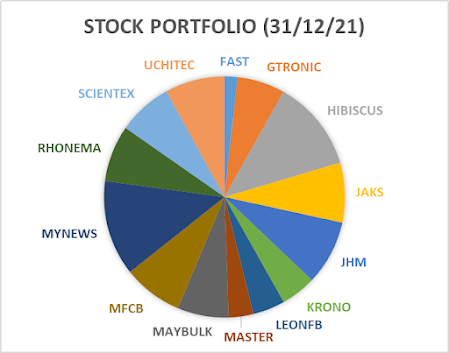 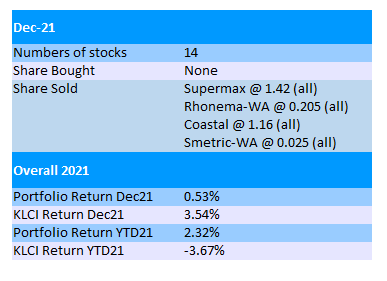 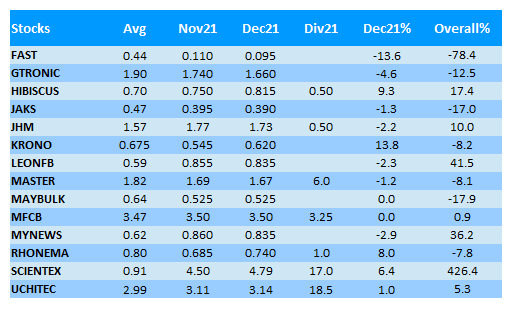 Finally a difficult year 2021 was over. My portfolio was flat in December and ended the year with a small gain of 2.32%.

This is because I started year 2016 badly with a 10% loss in the first month. However, it improved from the second half and ended the year with the least loss.

Generally I feel relieved that I'm still able to stay in positive territory in year 2021 but at the same time also feel disappointed.

With this move, I have reduced the total number of stocks in my portfolio to 14. There are still 4 stocks that I planned earlier to dispose in year 2021 but failed to do so.

Finally I said goodbye to Supermax the day after Topglove released its FY22Q1 result.

Initially I planned to hold its shares longer just because it has lots of cash. Its net cash alone is already RM1.20 per share.

Anyway I changed my mind when I wanted to "clean" my portfolio before the year ended.

I sold at RM1.42 which is equivalent to RM2.84 before the bonus issue. This is the price level in early May20 when it was about to start its incredible journey to RM24 in just 3 months time.

Overall I lost 21% in Supermax even though in my monthly portfolio the temporary loss stated was over 70%.

This is because I gained from trading its shares a few times before and I didn't adjusted my average cost price downward.

I also didn't adjust my cost price after the dividend got ex-ed.

This is similar to Jaks which shows 17% loss in my monthly portfolio update at the moment. Actually at current share price I'm still sitting on overall 30% gain because I have sold half of its shares and all its warrants earlier at a profit.

I didn't adjust my average cost price just for convenience.

Nevertheless, the percentage of profit/loss shown in the "Stock Transaction History" page are the most accurate as they are calculated using the formula:

Other than Supermax, I also sold all my Smetric-WA at 38% loss.

The investment in Smetric-WA is a sad story to me.

At the time I decided to invest in this company, its mother share was at 12sen and its warrant A was 4sen.

Its warrant's exercise price was 16sen and still have more than 2 years before maturity.

I decided to buy its warrants rather than its mother shares for the reason of greater leverage.

I didn't sell and it quickly fell back to 8sen which was still a good 100% gain.

I still didn't sell and didn't monitor its price closely until it fell below my entry price.

As it's entering the final 12 months before maturity date, I think I better cut loss to prevent it from becoming "trash papers".

I lost 38% from its warrants while its mother shares only lost 8.3% from 12sen to 11sen in this period of time.

This is the risk & reward of buying warrants. Your gain or loss is being magnified.

Anyway, if I buy its mother shares in the first place, I will not want to sell them at this stage.

I cleared all my remaining shares of Coastal at RM1.16 just before it announced its biggest ever contract win worth RM4.5 billion.

Why Always Me... is my feeling. 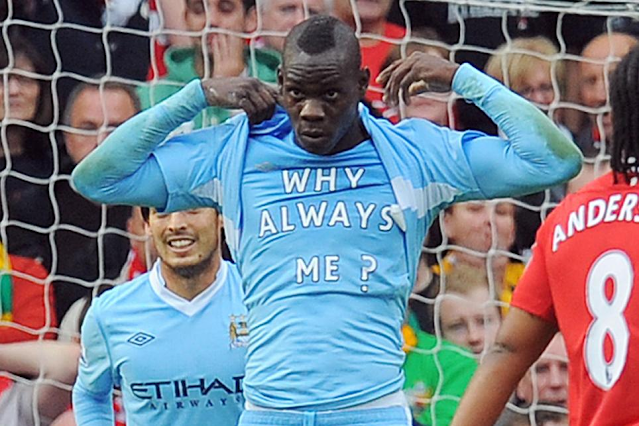 I have such "bad experience" with Genetec recently, and also Geshen, KPower, Notion, Adventa not long ago... Yes, this is part and parcel of stock market investment.

If I haven't sell all shares of Coastal before the contract announcement, I might want to add more of its shares.

However, I have no mood to buy back its shares after just clearing them from my portfolio. So I'm regretting my decision now. Coastal is at RM1.47 today.

The reason I didn't sell all my Coastal shares earlier is to wait for this moment but...

I only have a little free Rhonema-WA so I disposed all of them to make my portfolio looks cleaner. I'll continue to keep Rhonema mother shares.

Three companies in my portfolio released their quarter result in December which were Scientex, Krono and myNews.

Its property segment has achieved good growth over the years and might be the key to its continuous growth in FY22.

I don't have high expectation on property stocks in 2022 but fortunately Scientex focus on affordable landed properties.

Krono's recent FY22Q3's result (Aug21-Oct21) was better than my expectation. It's mainly lifted by China's business in which the acquisition of the remaining 83.3% shares in Quantum China Ltd was completed on 26 July 2021.

In its previous FY22Q2 ended on 31 July 2021, China has already contributed RM9.19mil revenue to the group in less than a week.

In the subsequent FY22Q3 ended Oct21, China registered a revenue of RM29.3mil which immediately overtook Singapore and Philippines as the highest revenue contributor.

However, total revenue this quarter at RM75.1mil was just marginally higher than RM74.5mil in the preceding quarter of FY22Q2.

New Covid-19 cases in Singapore rose steeply from Sep21 and reached its peak in Oct21, while cases in the Philippines surged from Aug21 and peaked in Sep21.

This might be the reason for poor revenue from these 2 countries in FY22Q3.

If next quarter Singapore and Philippines can go back to their previous levels, and China can maintain its figure, then Krono's revenue will grow tremendously.

Profit wise, latest FY22Q3 net profit of RM8.0mil  (EPS 1.3sen) was a record high for Krono, despite being affected negatively by forex loss of RM1mil.

Net profit margin increased from 6-8% to 10.7% this quarter due to better product mix.

I think Krono needs to prove that it can deliver consistent profit especially from China to get its share price up significantly. 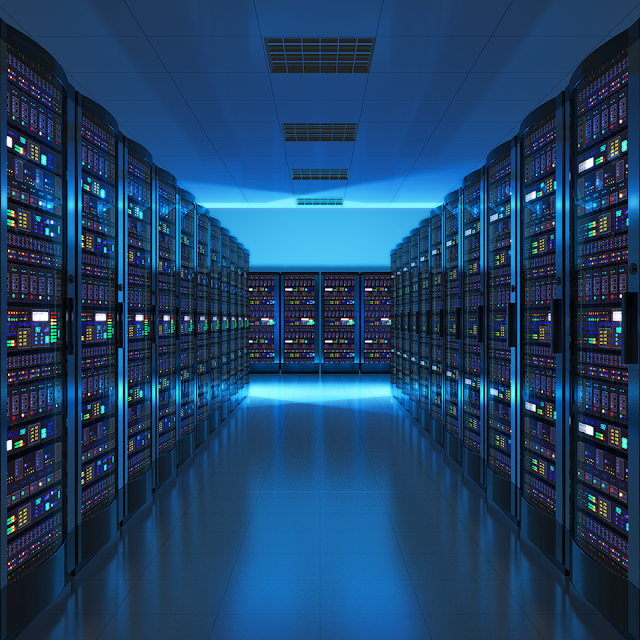 The FY21Q4 result of myNews was not good as expected. Its loss before tax of RM15.8mil was just slightly better from its worst of RM16.3mil loss a quarter earlier.

Currently the world recovery from pandemic is being threatened by Omicron variant.

The number of new cases break new highs in Europe and North America. Do you think Malaysia can avoid another surge of Covid cases and possibly MCO 4.0?

From the statistic in Google, There are 2.36 million worldwide new Covid-19 cases on 3rd Jan 2022, which is a record high by a massive margin compared to earlier waves.

Before the final week of year 2021, the world never had daily new cases of more than one million.

Many European countries have recorded their highest number of new cases as the Omicron spreads like wildfire. Israel who has the best Covid-19 vaccine coverage is also not spared from a new wave of infection.

Malaysia is doing quite well recently with less than 3,000 new cases daily compared to over 20,000 cases in Aug21.

That's why I can see many people mixing around without following SOP and no one seems to care.

We were hit by the unfortunate terrible flood which might cause Covid-19 cases to surge but we are so far so good.

The government reacted to the threat of Omicron by bringing forward the interval of getting the 3rd dose of Covid-19 vaccines by 3 months.

I believe that it's just a matter of time for Omicron to spread in Malaysia. Hopefully our Health Ministry's plan works, despite Omicron is said to be more resistant to vaccines.

This new variant is still new and scientists are still investigating it. It is believed to cause less severe infection.

However, with the spike in Covid-19 cases in most western countries, the hospitalization rate also rises.

While the Omicron is still fresh in our minds, another new Covid-19 variant called "IHU" which has even more mutations emerged in France.

IHU is reported to be more contagious than Omicron and is unsurprisingly more resistant to current vaccines.

The emergence of new variants seem to be never-ending. How will this affect the stock market in 2022?

Will "recovery stocks" take another hit?

Will gloves stocks have another good time?

Will we have MCO 4.0 with strict lockdown?

No one can predict the future.

I try to be more optimistic and think that the latest variants will eventually turn into something like common cold viruses which hardly cause death.

Anyway, I still have to be more careful when buying stocks and keep more cash at the moment.

When I have a bad year in term of stock market return, the following year will be a very good one. Hopefully this rule still stands in 2022.