LTKM, a Bursa-listed company and one of the most famous chicken eggs producer in Malaysia, has decided to dispose all its existing businesses for RM158.83mil.

Besides the poultry business which contributed 96% of its revenue in FY21, LTKM is also involved in sand mining activity as well as property development in the past.

Upon disposal of all its subsidiaries, LTKM will become an empty shell. It has proposed to acquire 100% equity interest in Local Assembly Sdn Bhd for RM336mil.

Local Assembly is a Johor-based EMS (Electronics Manufacturing Services) provider. It's not only profitable, its revenue and profit are growing tremendously in the past 3 years.

After the acquisition, Local Assembly will be the only subsidiary of LTKM, and LTKM will change its name to LA Technology Bhd.

One week before LTKM's shares trading was suspended for this announcement, its share price has already been pushed up by 23% from RM1.30 to RM1.60 by insiders.

Do retailers still have a chance to grab its shares at "fair price" after the resumption of trading tomorrow?

In summary, after the disposal of its entire existing business, LTKM will undertake capital repayment of RM1.1098 per share as special dividend.

After that, it will carry out share consolidation in which two LTKM shares will be consolidated into one LTKM share.

After the consolidation, it will issue 393.33 million new LTKM shares at RM0.60 each as part of the purchase price of Local Assembly.

Then, it will issue another 230 million new shares to investors to be identified later.

Currently LTKM has 143.1mil ordinary shares at RM1.60 per share.

Thus after ex-date of the special dividend of RM1.1098 per share, LTKM's share price will be adjusted to RM0.49.

So the vendors (sellers of Local Assembly) who are offered LTKM's shares at RM0.60 per share get an almost 40% "discount" from current market price of LTKM.

After the completion of all the corporate exercises, LTKM's total ordinary shares will increase to 695 million shares.

How much profit can Local Assembly (LA) generate per year? 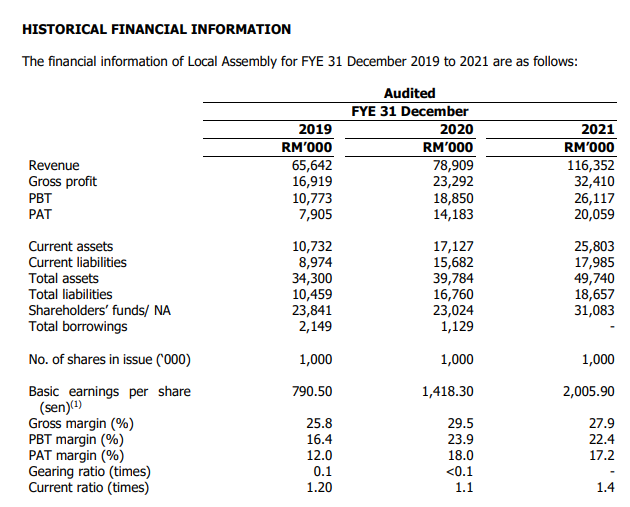 Its PAT margin was at an impressive double digits and was as high as 17.2% in most recent FY2021 in contrary to low to mid single digit PAT margin by most other listed EMS players.

After all those corporate exercises, LTKM's share price will be adjusted to RM0.98 tentatively from current share price of RM1.60, and its total number of ordinary shares will increase to 695mil.

Since LA will become the only subsidiary of LA Technology Bhd which is wholly owned, FY21's actual EPS will be 20/695 = 2.89sen.

Thus, if investors buy LTKM shares before its special dividend at RM1.60, the projected PE ratio of 2022 is 24.5x.

Regarding how much PE ratio is fair for LA, only market will decide. Will it follow traditional EMS players' PE or tech-related players' PE?

Furthermore, who knows LA can continue to grow substantially in the future?

LA started its business in 2000 and has 2 main production divisions which are assembly of E&E connectors and assembly of bicycle components & plastic injection molding.

It has its market mainly in Malaysia and Singapore.

To me, I think this RTO (Reverse Take Over) is very good for existing shareholders of LTKM who owns its shares at below RM1.30 before the recent spike of share price.

The purpose of this article is just for information sharing and there is no buy sell suggestion. The information given here might not be accurate.