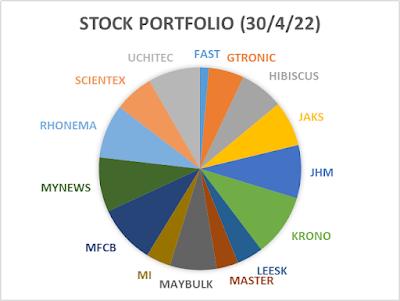 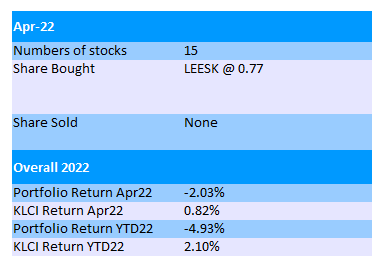 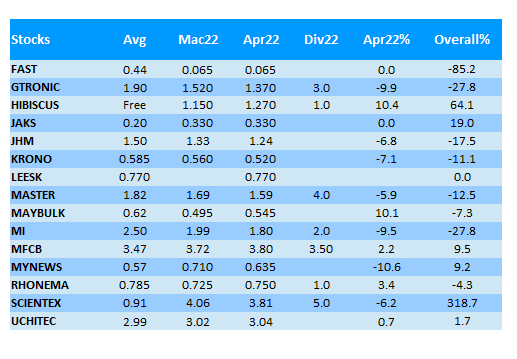 The month of April is another lackluster month for my portfolio which lost 2% to bring the overall loss-to-date to 5% this year.

Apart from the retreat of tech-related stocks, the shares of myNews have been heavily sold down 10% as well.

The best performers in Bursa Malaysia are still the plantation stocks which I don't own any of them.

Indonesia's ban on its palm oil export has caught the market by surprise and it certainly helps to push up the CPO price.

Out of the total 14 stocks in my portfolio, 8 of them are suffering from losses now. This doesn't look good indeed.

Only two companies in my portfolio released their quarter results in this month: Mi & Gtronic.
Both sets of results are not something to shout about.

This Q1 result included the contribution from Accurus which was acquired in Apr21 (Q2 of FY21).

Accurus's Ningbo's factory in China is not ready yet and is expected to commence operation in the second half of 2022.

I guess most investors of Mi are attracted by the company's 10-year master plan started since 2019, in which it will introduce one new business unit every 2.5 years.

Mi started with semiconductor test equipment as its core business since 2007. As part of its 10-year roadmap, it has successfully added a new semiconductor material business unit in mid 2021.

If everything goes to plan, its upcoming third business unit which is related to high-tech advanced packaging technology, should be ready by the end of 2023.

Its fourth business unit will be high-tech commercial electronic products for mass market which is something like Dyson and Xiaomi.

Of course it won't be easy to achieve such ambitious targets. We might see capital raising exercises, increasing borrowings, profit margin pressure etc along the way. 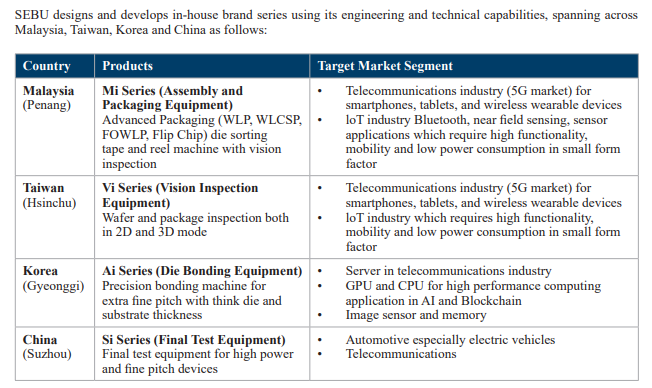 Gtronic's FY22Q1 result was not that good. Its quarter revenue dropped to record low while net profit dropped 50% YoY to RM9.45mil (EPS 1.41 sen).

However, it's kind of expected as its KL plant has stopped operation in Dec21 due to severe price competition and volume erosion caused by technology replacement.

Its near future will largely depend on its core sensor business, as well as the laser lighting business which is expected to double in early 2022.

Besides, according to its latest annual report, there are 4-5 potential new projects in the pipeline which may contribute to its growth in the next 2-3 years.

There was a sudden drop of Gtronic's share price in Nov21 from above RM2 to RM1.50 level. In hindsight, this should be due to its expiring pioneer status in Jun22, closure of KL factory and perhaps impending change of CEO.

Its 25,000 sq ft factory expansion project should have been completed by now (expected in Q1 of 2022). Together with its vacant KL factory, Gtronic will have ample space for growth if opportunities arise.

I added LEESK into my portfolio this month. It's an unpopular stock without much liquidity.

I have watched LEESK for quite some time and decided to invest a bit into it even though it does not look "cheap" in term of PE ratio.

The reason is simple, I just think that it can report a very good profit growth this year.

I'm contemplating to add a plantation stock into my portfolio but until today it doesn't happen. I'm worry that plantation stocks might have similar fate like steel stocks.

Regarding construction stocks, I still haven't made my move as I try to time the market.

There are quite a lot of uncertainties such as cost pressure, labour shortage, lack of contracts, general election etc.

As I usually don't invest in big cap company, those construction stocks in my radar are the smaller ones such as Kimlun which is my primary target.

While we are approaching the middle of year 2022, there are still lots of uncertainties.

The Russia-Ukraine war is still on-going, we can't totally rule out the deployment of nuclear weapon in desperation.

Furthermore, will the relentless sanctions on Russia result in serious global economy disarray?

As for Covid-19, I guess nobody is afraid of it now and we're almost back to "normal" life from now on.

However in China, it looks like battlefields with strict lockdowns which certainly have negative effects on businesses and supply chains.

The world has been battling with inflation pressure since last year. The US inflation rate reached its highest point since 1981.

In Malaysia, the average inflation rate in 2021 is 2.5%, and it's "only" 2.2% in Mac22 despite the significant price hike pressure felt by Malaysians.

Thus, Bank Negara does not seem to be in a hurry to implement its first interest hike after the Covid-19 pandemic.

Meanwhile, US has just announced its second interest rate hike at 0.5% yesterday, which follows a 0.25% hike in Mar22.

Investors seem to celebrate as US stock market went up in response to it. It's not a 0.75% hike initially feared by the market it seems.

Back in Mac22, everybody seemed to fear of a 0.5% hike but now it's OK to have a 0.5% hike. So I guess subsequent US interest rate hike might not affect the stock market much in the future.

The current month of May will be another exciting month for stock market investors as most companies will release their first quarter results.

Let's see how well those companies perform in such a high cost environment.