On March 17, 2019
Foreign Direct investments, to me, is the singular most important macro indicator for the mid-long term outlook for the economy. Following the stupendous May election result, many were optimistic over the reforms and plugging of leakages to the system. However as the months dragged on, nothing seems to be moving. All we saw was a prolonged process of getting the culprits to their destinies. 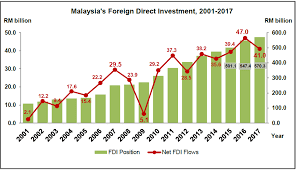 Some GLC heads and other high ranking officers were removed, but nothing concrete was moving the real economy. The stock market went into a slow death mode. Projects were canceled
and still,  more inertia seems to be bugging most ministries.

Even the most apologetic among the supporters were murmuring. Things seemed to be finally moving just before CNY this year. The following bit of news will surely spark a lot of things. A 48% jump to RM80.5bn in FDI for 2018, largely came about in the second half of 2018 - which speaks volumes about the confidence foreign long term investors have in the new government.

The figure is all important and would be an indicator of bright things to come. Long term FDI takes some time to trickle down to the real economy.

Malaysia recorded a 48% increase in approved foreign direct investment (FDI) across all sectors amounting to RM80.5 billion in 2018, the finance minister said.
Approved FDI in the first half of the year was only RM26.5 billion but this grew significantly higher at RM54 billion in the second half, Lim Guan Eng said.
Lim said the FDI growth was augmented by a 3.2% year-on-year expansion in the Industrial Production Index (IPI) in January this year, higher than the market consensus of 2.3% compiled by Bloomberg.