MFLOUR - EXPLOSIVE EARNINGS UNVEILED WITH
MAGNANIMOUS GROWTH POTENTIAL !!!
(PERSONAL TP 0.85 Short Term, 1.00 Mid to Long Term).
Recently I had spotted this mid cap company; an investment grade, which just posted a superb quarter result  - MALAYAN FLOUR MILLS BERHAD or MFLOUR (Stock Code 3662, listed on MAIN BOARD, CONSUMER PRODUCTS/SERVICES, market cap RM 746.3M)
In summary, MFLOUR is a company whose core business is in flour and poultry.
I noticed considerable interest starts to build in on Friday where the volume registered a sizeable increase to 13.7 million units.
With this positive momentum & enthusiasm arising from the quarter report, I believe, should carry forward next week since it was able to close on Friday conclusively at 0.745. I foresee it trending to the next resistance of 0.80 before heading to my personal TP of 0.85 (short term) to 1.00 on the intermediate to long term with its warrant trending in its stride.
WHY I THINK THIS STOCK COULD HAVE GREAT POTENTIAL TO RISE FURTHER?
1. Superb Quarter Result Earnings - Consistent Growth
Refer below summary of QR performance taken from klsei3investor website.
https://klse.i3investor.com/financial/quarter/latest.jsp

In summary, the company reported a net profit which had an improvement of 19.74% Quarter on Quarter (QoQ) and a whooping 1,145.18% Year on Year (YoY) !!!
As commented by the Board, both the flour and grains trading and poultry integration segments recorded higher operating profit.
i) Flour and grains segment's profit increased mainly driven by higher selling price to offset increased commodities cost to protect margin. Amidst the price increase, demand for flour and grains remained healthy.
ii) Poultry integration segment's profit increased mainly as a result of key factors below:
a) Broiler production volume is higher as result of higher day-old-chicks (DOC) production volume. Consequently, higher sales volume of live bird and poultry processed products was recorded
b) Downward adjustment of fair value on biological assets. Impact is lower fair value loss.
iii) In addition, Q1 2019 PBT was further attributable to:
a) The Group's share of profit of equity accounted joint venture in Indonesia amounted to RM7.0 million as compared to a share of loss of RM1.5 million in Q1 2018. Higher profit is attributable to higher margins arising from higher selling prices and forex gains from a stronger Indonesian Rupiah against the US Dollar.
b) Higher net interest expense was partially mitigated by the interest cost savings arising from the repayment of revolving credit loans using the proceeds raised from the Rights Issue. Impact is savings of RM1.6 million.
Long Term Price Target Based on EPS
Taking a conservative approach to derive long term target price, let us say that the company maintains its performance of 2.41c EPS for 4 quarters. Therefore, total full year EPS would be 9.84c. Using a conservative Price to Earnings (PE) Ratio of 10 times, we would derive the long term conservative target of MFLOUR at RM 0.985. Should earnings grow every quarter at a rate of 5%, then the price target would be around RM 1.10 taking a same approach.
2. Dividend Policy - Payout Twice Per Year, Without Fail Since 2013
Refer below the dividend payout history for MFLOUR since 2013:
We notice that the company has consistently paid dividends, without fail, since 2013. Next dividend payout will be announced during August 2019 QR. I translate a 5 years consecutively and consistently dividend payout companies as BLUE CHIP COMPANIES.
With the upcoming growth plans, it would be logical to see that the dividends should start increasing this FY onwards. For funds looking at consistent dividend payout, this stock would be a good pick for long term holding. 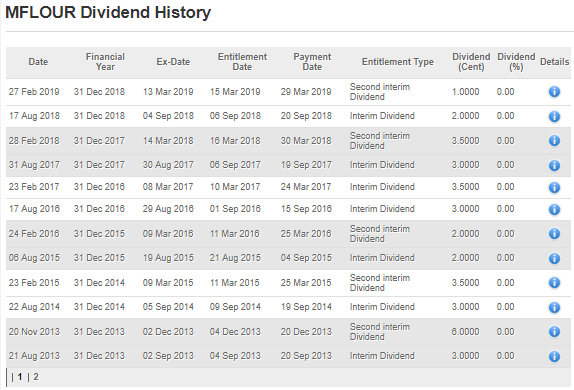 https://www.malaysiastock.biz/Corporate-Infomation.aspx?securityCode=3662
3. Growth Potential - Lower Material Costs, New Poultry Plant in 4Q 2019 and Potential Partner/Merger for Exports
I see a few key factors of growth for MFLOUR :
i. Falling Wheat Prices - Lower Costs and Higher Margins
Wheat is a core cost component for MFLOUR. Recently, wheat prices have been falling on the international markets due to favourable weather across Rusia to North America, which has led to good wheat harvest and optimistic crop forecasts, as reported on Bloomberg. This would mean lower costs and higher profit margins in the coming quarters.
ii. New Poultry Plant in Lumut Planned Opening in 4Q 2019
As reported by The Star (link below), AmInvestment Bank Research recently met with the company and affirmed its positive outlook on the group.
Demand for chickens are picking up in the fasting month and during Hari Raya month. Meanwhile, the new poultry plant in Lumut is expected to be commissioned in 4Q 2019, which will increase its slaughtering capacity by 50% from 80,000 birds per day to 120,000 birds per day.
The company would also be able to raise its broiler population to more than 80 million from 66 million per year. This is expected to underpin the group's net profit growth in FY20F and FY21F going forward.
https://www.thestar.com.my/business/business-news/2019/04/16/mfm-likely-to-see-better-results/
iii. Potential Partner/Merger for Exports
Below news reported by The Edge after the AGM on Friday 24/5/2019. MFLOUR is keen to partner with other companies, as it seeks to establish a solid foothold in the downstream segment of its poultry integration segment. Chairman commented that they are looking for potential partners or mergers. Also, MFLOUR has a halal label for their products, hence strong opportunity to export to Middle East or Singapore markets.
https://www.theedgemarkets.com/article/malayan-flour-mills-seeks-partner-develop-processed-poultry-products
4. Shareholdings - Top 30 holds 61.5% & Notable Funds Inside
Refer below image for list of top 30 MFLOUR shareholders as of 29 March 2019:
The total shareholdings of the top 30 is 61.5%, which means that the balance float about 38.5% is the only float available to public. In addition, note that there are many notable funds which are holding this stock. Should all these funds be holding in for the long term, the price should be able to trend with less resistance.
Notable foreign shareholdings : Credit Suisse, Wise Bright Investment Ltd, Rise Glory Investment Ltd, Citibank New York, CBNY Dimensional Emerging Markets Value Fund
Notable local shareholdings : Employees Provident Fund Board (EPF), Pertubuhan Keselamatan Sosial (SOCSO), Perbadanan Pembangunan Pertanian Negeri Perak, Phillip Capital Management Sdn Bhd https://www.malaysiastock.biz/GetReport.aspx?file=AR/2019/4/25/3662%20-%200843007274845.pdf&name=MFM-Annual%20Report%20(47-196).pdf
5. Technical Analysis - Possible Break-Out of Cup and Handle Formation
Refer below daily chart of MFLOUR.
On Friday 24/5/2019, we can see the formation of a bullish engulfing candle with a sigificant volume increase. On the longer term, we can see the candles forming a bullish cup and handle pattern.
With the superb earnings reported, we might see the price break-out the ICHIMOKU Cloud at 0.80 then test the first resistance of the Cup and Handle pattern of 0.85 in near time.
Next resistance upon break-out is seen at the psychological level of 1.00. CONCLUSION
Considering all the above, my personal TP for MFLOUR is set at RM 0.85 (Short Term), and RM 1.00 (Mid to Long Term).
LET’S SEE HOW THE SHARE PRICE MOVEMENT IN THE NEAR FUTURE FORBEARING ANY GOOD CORPORATE NEWS.
Disclaimer : The above opinion is not a BUY CALL but only sharing my observations.
BURSAMASTER