This post first appeared at The Pelham Blue Fund, the premier day trading blog for Malaysia stocks and warrants. We take your market knowledge to the next level.
Follow us on Twitter and on Facebook for 24/7 market commentary, and our VIP Telegram Group for trading advice and to see our successful trades in real time.


The collective wisdom of the markets sometimes would propel a stock upwards and onwards, until it suddenly hits a roadblock. At certain price points, there are clearly sellers waiting to dump their positions and exit.


Everyone understands the following. We have written it in such a way that even a 5-year-old would understand (just replace 'stock' with 'bananas').


Conventional charting wisdom dictates that round numbers tend to be key points for support and resistance. Let's take RM1, which for a stock can be a resistance point until one day it becomes a support point. The sellers have been exhausted, and in a market of more buyers, the stock goes up. Easy peasy.


This example also applies at different price points. Market psychology suggests that people are obsessed with round numbers. So it is somewhat natural (and intuitive) to encounter support and resistance points at RM1.10, RM1.20, RM1.50, RM2, and so forth.


In this ongoing battle of buyers versus sellers, somebody will lose money. Hence you will encounter certain patterns that are easily understood for most of us with a basic knowledge of charts.


In this case, we're talking about the 'zig-zaggy M pattern'. It's also known as 'head and shoulders' in charting parlance, but we feel our term is equally descriptive and just as silly.


We go out of our way to try and not offend people, but we get dirty looks when we say that we reject the majority of what constitutes 'technical analysis'. Hence terms like 'bearish engulfing' and 'falling star' are as arcane to us as 10th century Sanskrit.


We do not have a vendetta against technical analysis. We're also too lazy to evangelise and offer our approach as a better one instead (Editor's Note : it arguably isn't. Who knows?).


We're just saying that we use an approach that works for us. Believe us, we've read the literature and applied all the popular indicators, be it Bollinger Band, RSI, SMA, EMA, or IM4U. We are failed technical analysts.


Our primary skill is in price-volume analysis. Applying this knowledge via trial and error in our trading activity has made us pretty decent in what we do. It's basically why we managed to achieve a 31% gain in three days, as well as RM10,000 in profits (yes, in three days). We know exactly how much that skill is worth.


Now, back to the zig-zaggy M pattern and why it was just one piece of the puzzle for this trade.


But the trade was not really about the fundamentals; it's about the charts. And the resistance point here is one epic, multi-month battle of wills.


The chart below is from January to end of September 2019. We omitted the October breakout - we figured you know where this is going.


We are not as smart as proper technical analysts or the buy-and-hold heroes. Our capital base is limited, as is the number of opportunities we allow ourselves to be involved in. We wouldn't survive a pullback from RM4 to RM3.40, which happened here. There would be nothing to buy if we were wiped out.


So we designate zones - these are points in which we'd consider a trade. We don't try and catch long term falling knives. If it hits RM3.40, we have no clue if it's destined for RM3.20 or RM5. Those who say they know are probably friends with Marty McFly.

These zones are not trivial : they represent a commitment to trade and to risk our capital. We treat them as if they're sovereign borders. Anything out of this zone is a no man's land - or we should say, no uncle's land.


Zones 1 and 2 are essentially resistance points for GCB's stock. One is in April-May, the other in September. That price point is RM4. As you can see, the stock has failed to turn that resistance point into a support point. The day-to-day price movement is erratic : the stock is expensive and illiquid, so it doesn't exactly permit orderly trading - the opposite in fact, which is panicky trading.


The price consolidation in Zone 1 culminated in failure - the stock failed to break out. Market conditions at the time were not exactly favourable either, hence the downward movement.


In late August however, the stock gapped up strongly on GCB's latest quarterly results, plus a bonus issue proposal.


We were not in a hurry to trade this. What we want is for the stock to show its mettle and hit the RM4 mark again.


Take a closer look at Zone 2.


This crucial range is where the stock tries to prove itself. Call it consolidation or base building; it's yet another battle between buyers and sellers. In this range note that there were at least four attempts to break the RM4 mark.


And when it did break, jumping all the way to RM4.16 on 17 September 2019, it fell back. the correction was swift. Many would have given up; it's just another false breakout, right?


That was a key point for us; we took it as a signal. We kept watching and bided our time.

It was time to prepare an assault. Keep this aphorism in mind, we came up with it ourselves:


"If the stock wanted to blardy fall, it would have blardy fallen a long time ago"


As always, we prefer to go into call warrants to maximise our profit potential, and to get returns that are commensurate with the risk we're assuming.

As it so happens, there was a lonely, cheap call warrant to buy. We like fresh issuances - if no one's in it yet, we'd love to get an exposure.

GCB had a few newly listed call warrants by late September. Our pick was GCB-CI, more due to the pricing than anything else. With new call warrants, you can almost be assured that the warrant will track the stock closely. There will be liquidity provided by the issuer. Why? Because nobody's buying it yet!

Transaction records indicate that we were probably the third/fourth account holder to ever buy GCB-CI. And we ended up buying massive sizes, due to the sheer conviction of our view towards the stock.

The source of this conviction? Buying at what we felt to be a fairly obvious breakout point. Know that we didn't try to be smart. We didn't try to be cute by accumulating a ballsy position when the stock is declining. This trade is not a falling knife.

The obviousness (Editor's Note : In hindsight, it is. But not at the time!) was in GCB's price move on 2 October 2019. As a rule, we know that breakouts can be swift. For a fairly illiquid stock like GCB, there would be a fast move in prices - history suggests so, given what it looked like during previous rallies for the stock.

The following is Zone 3 : the breakout zone. 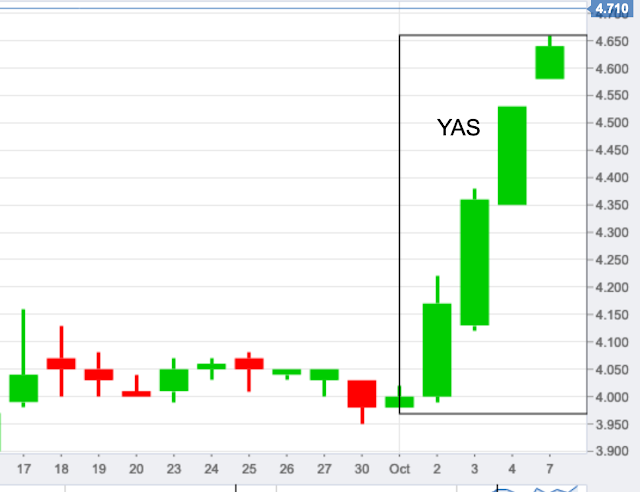 For all we know, this story was the trigger. On 2 October, the stock breaks out from RM4 to RM4.10. If there was a time to put on a big trade in GCB, at any point over the past five months, this was it.

Remember that this whole consolidation in GCB stock took six months to achieve. Any breakouts to new all time highs can reasonably be expected to be a strong and fast move. This is where our call warrant pick comes in.

The trick is to acquire early, and acquire big. Because of the high risk involved, the profit opportunities better be worth it.

And so we did.

Buy and sell concluded : 2 to 4 October


It turned out quite well for us. Not only did we underestimate the strength of GCB's movement, we sold too early as usual. Not that we have cause for complaint: via GCB-CI, we essentially rode GCB's stock from RM4.10 to RM4.53.

And we got our gains. 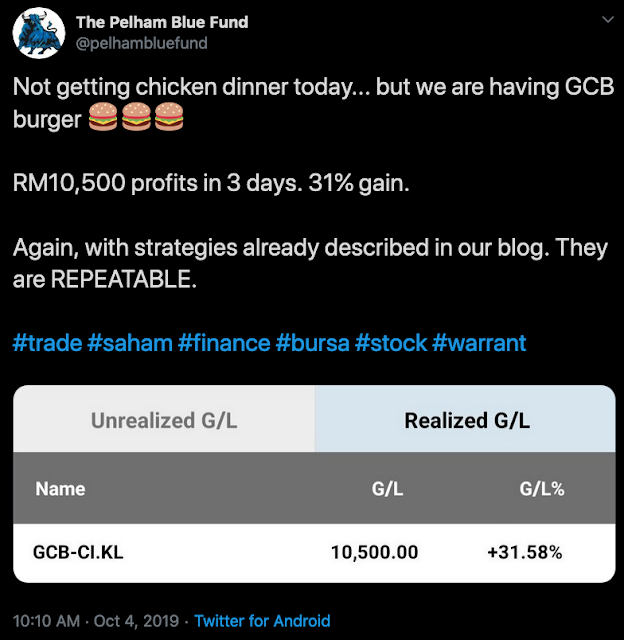 You know how we feel about chicken dinners....