The key different between them is that Xiaomi Redme AirDots has a large physical button on each of the earpieces, while the Xiami Mi AirDots Basic is using touch sensitive surface instead of physical buttons on its earpieces. 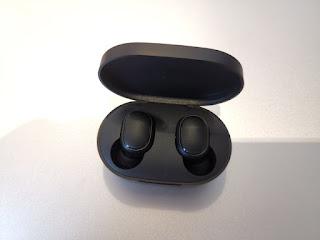 Despite selling at a very affordable price, its sound quality is pretty much satisfactory. It is able to produce strong punching bass, energetic treble, and lively vocal.

The casing itself is also a charging dock for the earpieces. You can find a USB port at its outer surface for charging purpose.

To re-charge the earpieces, put them in place inside the casing, close the cap, then connect the casing to a USB charging source.

When charging, you can observe a dim LED light in front of the casing. The LED is red when charging, and turns into white when fully charged. The white light will automatically turn off itself after 1 minute.

To use the earpiece,  press its button for 1 second to turn it on (white LED on the earpiece will light up).

To turn off the earpiece, press its button for 5 seconds (red LED will light up for a while).

Use your handphone's Bluetooth function to search for Redmi AirDots_R to do pairing. No pairing password is needed.

You can use the earpiece either in left ear only, or in right ear only, or in both ears. When both are used, you can get stereo sound effect. If only one of them is used, it will be running on mono mode.

If you find anything not functioning well, you can try resolve the problem by resetting the earbuds.

First of all, take out both the earbuds from the casing, and then proceed to turn them off.

After that, press the earbuds button for 15 seconds respectively. When you see the earbud's LED is alternating between red and white, put it back into the casing. It will then be reset and all previous settings will be restored to factory default.

You will need to redo the Bluetooth pairing with your handphone before it can be used again.

To call up the handphone's virtual assistant, when not in any call:
http://voyager8.blogspot.com/2020/01/instruction-manual-for-xiaomi-redme.html?utm_source=feedburner&utm_medium=feed&utm_campaign=Feed%3A+blogspot%2FnzRYh+%28The+8th+Voyager%29