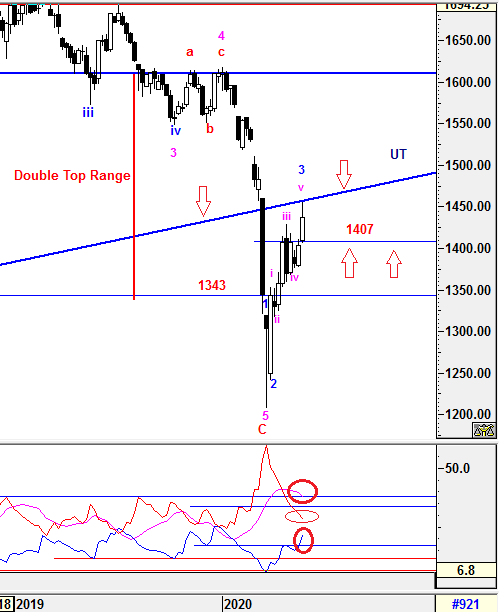 KLCI was able to break above 1407 for initiating an upward move to overwrite both bearish formations (Dark Cloud Cover & Bearish Harami) which created few weeks before. However, It was resisted at UT line and the sub 5th wave (v) of higher degree of 3rd wave extension (3) is believed to end at 1455.13 which in conjunction with the end of higher degree of 3rd wave (3).  Therefore, there would have some knee jerk reactions expected on entering into correction/consolidatoin phase in coming days or weeks.
On the other hand, -DMI (red line) was still heading down and +DMI (blue line) was able to break up resistance with ADX (pink line) started to curve down which implying bearish momentum is decreasing in medium term to long term.
Prevailing trend could be emerged if levels listed below was broken:
Resistance - 1460 (UT line)
Support - 1407
Daily Time Frame 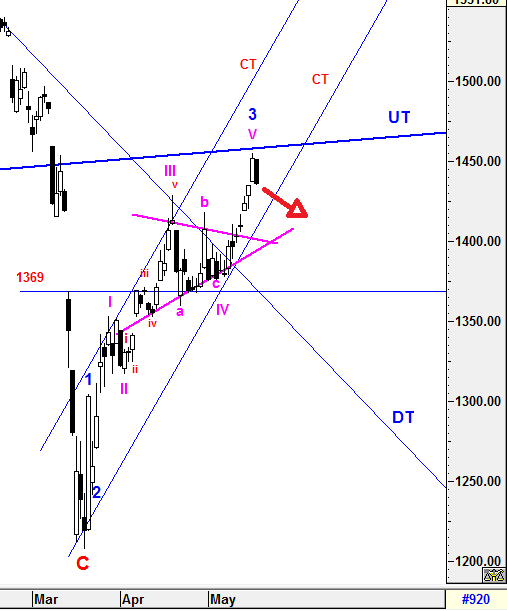 KLCI managed to breakout from the symmetrical triangle formation and made an implusive sub 5th wave up to test some level around UT line at highest point of 1455.13. Thereafter, it formed an tweezzer top formation beneath the UT line which indicated prevailing trend is about to change and it will be confirmed if it closed below 1436.76 on Monday. To reiterate, Sub 5th wave (v) of higher degree of 3rd wave extension (3) is believed to end at 1455.13 which is also in conjuntion with the end of higher degree of 3rd wave (3). Next, an impending correction or consolidation phase might take place to form higher degree of 4th wave (4) in coming days or weeks. Due to variation of 4th correction waves combination, it will be monitored closely for projecting potential targets based on the degree of momentum.
On the other hand, as 1455.13 is only the minimum criteria for qualifying Sub 5th wave (v), we will not rule out that the prior two projections targets (1462.41 & 1488.82) may still be archieved if the UT line is breached and closed above 1460 in comings days.
However, we will still be very caution as the current level is still below UT line with the tweezer top formation.
Prevailing trend could be emerged if levels listed below was broken:
Immediate resistance - 1460 (UT line)
https://klse.i3investor.com/blogs/E_Wave/2020-05-25-story-h1507830971-KLCI_waves_8.jsp
Immediate support - 1425
E_WaveFBMKLCI
Next article Next Post
Previous article Previous Post
‹ Newer Post Older Post › Home