On June 24, 2020
CONSTRUCTION counters trading on Bursa Malaysia are approaching valuations that can only be justified during a construction “boom cycle”, say analysts covering the sector. As at last Wednesday, the sector’s price-to-earnings ratio (PER) stood at 16.35 times.

An analyst with a foreign research firm says the construction sector’s current PER is characteristic of one going through a “mid-cycle”, which is justifiable given the current jobs in hand and earnings expectations.

“There is a PER band that the construction sector trades at during low, mid- and boom cycles. For a mid-cycle, I think the sector is currently trading at a good level. However, analysts who are more optimistic would urge investors to pay boom-cycle PER,” the analyst tells The Edge.

“Let’s say the economy is in a crisis and the government spends less; then we can say, ‘Okay, the sector should be trading from seven to 11 times PER’. In the past, during boom times, investors were willing to pay a PER multiple of 20 times.

“If an analyst wants to justify a higher target price, one will have to push the PER multiple to a [higher] one and ask the fund manager to say it is justifiable because of whatever reason. But if there is political instability, fiscal constraint and reviews of projects, then all these may be arguments against paying such a high PER,” he says.

The boom-cycle PER for Malaysia’s construction sector is typically just above 20 times, according to the analyst. This can be seen from past trends, including in 2017 when the then Barisan Nasional (BN) government awarded multibillion-ringgit worth of infrastructure contracts.

The Bursa Malaysia Construction (KLCON) Index at the time was trading at a low to mid-20 times PER throughout the year. The sector only started to trade below the 20 times level in 2018 when the likelihood of a change in government during the 14th General Election (GE14) seemed high.

After GE14, the sector traded below 15 times PER, and even touched the trough of around 10.4 times in December 2018, as the then Pakatan Harapan (PH) government put some of the major infrastructure projects already announced and awarded by the BN government on review, pending budgetary availability. 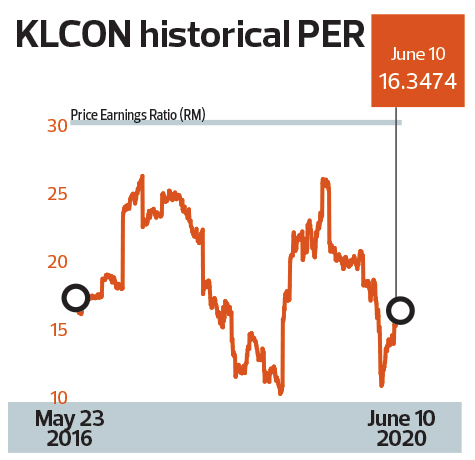 However, as the PH government found that it could not scrap some major infrastructure projects without incurring billions of ringgit in penalties to investors and partners, the sector started to trade at a higher PER level again.

Last year, the sector was trading in a band of between 15.6 and 26 times its earnings, as the government resumed construction of the Mass Rapid Transit Line 2 and agreed to continue with the East Coast Rail Link project.

The government had also agreed to resume the development of the RM70 billion Kuala Lumpur-Singapore High Speed Rail (HSR) project by end-May this year, although this has been postponed again because of the Covid-19 pandemic.

As the global economy, including Malaysia’s, was ravaged by the pandemic from early this year and international investors dumped risky assets, the valuation of KLCON declined to 10.8 times as at March 19, a day after the Movement Control Order (MCO) started.

Since then, the sector has been making good strides in attracting investors back, as seen in the rise of the KLCON index. Malaysia’s reopening of economic sectors by stages has also given investors the much-needed confidence to invest in Bursa-listed equities, including construction companies’ shares.

Is the current valuation justifiable?

Another analyst The Edge spoke to says KLCON has reached its pre-MCO levels due to the influx of liquidity in the market and expectations that the government will start pump-priming the economy through infrastructure spending soon.

“Fundamentals are not looking good now, but strong recovery should come next year,” the analyst says.

This expectation is probably the reason why the KLCON index has been approaching a boom-cycle valuation, despite no confirmation on whether there would be pump-priming through infrastructure spending post-MCO.

In an industry insight note covering the construction sector in six Asian countries released on June 2, United Overseas Bank (UOB) says that for Malaysia, it is unlikely that construction-related stimulus measures will be introduced after the pandemic is contained.

“Post-MCO, the recovery in the construction sector is likely to be slow due to the disruption of the building materials supply chain. The sharp fall in oil prices will reduce the government’s revenue, which typically accounts for about one-third of total revenue.

“The Malaysian government may review its infrastructure spending to mitigate the impact of the federal deficit as it focuses most of [its] resources towards curbing Covid-19,” the bank adds.

This is not surprising, however, as long-term measures to get the economy back on track will only be revealed in Budget 2021 and the 12th Malaysia Plan.

For now, the RM4 billion worth of projects for the construction sector as announced in the Prihatin Economic Stimulus Package will be the only allocations that the sector can expect, although this will benefit smaller firms more than the bigger ones.

While the Penjana plan does provide measures to stimulate demand for properties, this depends on whether the country’s economy recovers and people start buying properties again.

Property development is one of the biggest sources of construction jobs for construction companies, besides infrastructure development by the government. However, the property market had been in a slump even before the pandemic.

CGS-CIMB Research construction analyst Sharizan Rosely says the deferment of the HSR to the end of this year has poured cold water on the sector’s recent HSR-related rerating.

“However, we stick to our view that a favourable HSR outcome remains a likely upside risk, given the lack of new mega infrastructure project options,” he says in a June 8 report. He is reiterating a “neutral” rating on the sector.

CGS-CIMB Research has YTL Corp Bhd as its top pick owing to the fact that it may benefit from the HSR project. The firm has an “add” call on the counter, with a target price of 97 sen per share. YTL was trading at 91 sen per share as at last Wednesday.

Joshua Ng, a construction analyst at AmInvestment Bank, has downgraded Gamuda Bhd to “underweight” from “hold” as valuations have become rich after the recent run-up in the company’s share price.

“The earnings downgrade is to better reflect the direct and indirect impact of the MCO and conditional MCO on Gamuda’s construction activities, property sales and toll road collections,” says Ng in a report on June 10.