Stocks you wish you had bought during the March equity rout

KUALA LUMPUR (June 23): At the peak of the global equities rout in March, when share prices were battered to decade-low levels, the best bargain-hunting opportunities presented themselves.
Investors who dared to go against the herd then and seized such opportunities will be laughing to the banks now.
The FBM KLCI, which fell nearly 400 points to a low of 1,219.72 points — its lowest since the Global Financial Crisis in October 2009 — has since rallied to reach 1,511.24 points yesterday, erasing nearly all its losses this year.
Likewise, the Bursa Malaysia Small Cap Index has bounced back 4,450.74 points to 12,140.01, from this year’s low of 7,689.27.
Given the strong share price rebound, the CEO Morning Brief has compiled a list of star performers on Bursa Malaysia — stocks that you probably wish you had acquired on March 19, when most hit their trough. The stocks are divided based on their market capitalisation (market cap).

In this category, nine saw more than 30% jump in share price. Altogether, these stocks have gained some RM187.61 billion worth of market value since March. 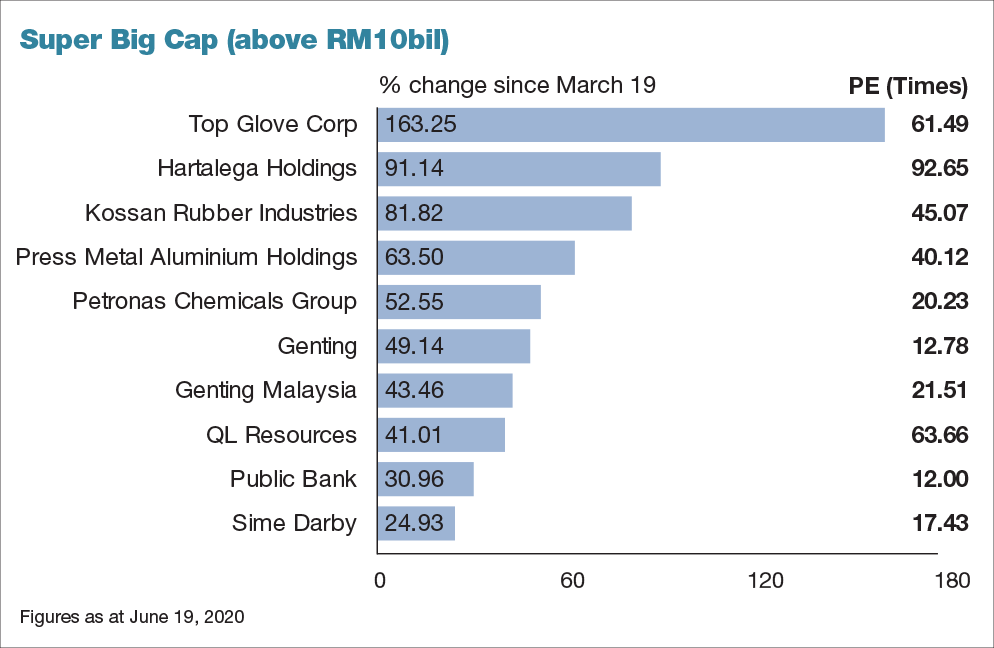 Topping the list is Top Glove Corp Bhd, whose share price has more than doubled over the past three months, followed by Hartalega Holdings Bhd and Kossan Rubber Industries Bhd, amid growing expectation of immense demand for rubber gloves.
Press Metal Aluminium Holdings Bhd, which sank to a near three-year low of RM2.84, is another star performer. It has since surged 63.5% to RM4.65. Both Genting Bhd and Genting Malaysia Bhd, which experienced an unprecedented worldwide shutdown of their casinos as the pandemic swept across the globe, have also managed to rally over 40%.

There are 24 companies that are valued over RM5 billion. Of these, half did not make the cut for this bracket because the gains seen were not that impressive. The pack that did is led by glove maker Supermax Corp Bhd, whose stock has soared five times (406.8%) to RM7.40 in the past three months. Valued at just below RM2 billion in mid-March, the company is now worth RM8 billion more, with its market cap standing at RM9.56 billion on market close on June 19.
MyEG Services Bhd, which rose 84.91%, is the second top gainer in this category after it jumped onto the pandemic bandwagon with healthcare related business ventures.
Airport operator Malaysia Airports Holdings Bhd, despite being one of the worst hit by the pandemic, saw its share price climb 41.6% from RM3.99 — which was its lowest point since August 2015.

Other than Shangri-La Hotels (M) Bhd that has fallen another 6.53% since March, the other 99 companies that are valued above RM1 billion to RM5 billion have recouped losses. Ten of these companies saw their share prices double. Comfort Glove Bhd, notably, joined the billion-ringgit club after growing fourfold (365%) to RM2.88. Valued at just RM361 million in mid-March, it now has a market capitalisation of RM1.68 billion.
Interestingly, technology counters also crowd this list, on optimistic prospects about automation upgrades and 5G development. UWC Bhd for one, has leapt 235% in the past three months; Greatech Technology Bhd (up 193%), Frontken Corp Bhd (129%), and Pentamaster Corp Bhd (100%) are also among the top gainers.

Besides glove makers that dominate this list, Luxchem Corp Bhd has also performed well, with a gain of 110% to 70.5 sen. The company supplies chemicals to glove manufacturers. Another top gainer is Supercomnet Technologies Bhd, which has jumped some 288% from its low of 32 sen in March to RM1.24 on Friday. It was reported that the company has seen its order volume doubling since the Covid-19 outbreak began. Yesterday, the counter climbed another 26 sen or 20.97%, to close at RM1.50, prompting an unusual market activity query from Bursa Malaysia. Earlier in the day, it gained as much as 36 sen or 29.03%.
Other notable stocks which saw their share prices surpassing their start-of-the-year prices include frozen food maker Kawan Food (which has rebounded 115% in the past three months to RM1.75), pharmaceutical giant Pharmaniaga (up 152% to RM2.36), plastic-packaging maker Thong Guan Industries (rallied 80% to RM3.68) and tissue paper maker NTPM Holdings (rebounded 80% to 54.5 sen).

Sinotop Holdings Bhd tops this list with its share price having increased to 56.5 sen, up over 600% from its March low of eight sen. It jumped on board the e-government services bandwagon at end-April by buying a stake in Dapat Vista Sdn Bhd, which owns MyPay, an app that can access multiple government services. 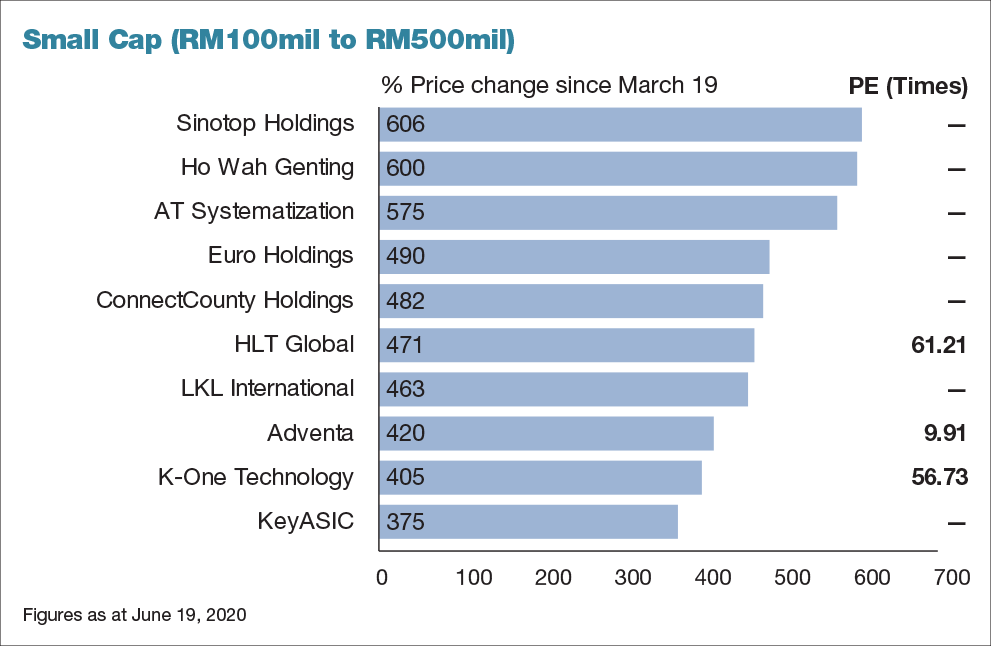 As for ConnectCounty Holdings Bhd, the company has said it is in talks for a possible reverse takeover involving S5 Systems Sdn Bhd — an immigration security firm that is deemed an important strategic partner, even by My EG Services Bhd. However, the company did not reveal any concrete plan.
The chase for stocks under the government solutions theme has even spilled over to Prestariang Bhd, which has rebounded by some 374% to 54.5 sen. The company has not reported any material developments lately, other than a stake divestment that raised RM5.52 million. The firm is still engaged in a court case with the government that started in 2019, following the termination of the national immigration control system (SKIN) project.

The share price trends of most small and nano cap companies have been mainly dictated by news flow about their opportunistic ventures into the healthcare segment. Companies that ventured into ventilators manufacturing such as AT Systematization Bhd and K-One Technology Bhd have jumped 575% and 405% respectively. Those that went into the distribution of Covid-19 test kits have also seen their share prices surge, like Ho Wah Genting Bhd (up 600%) and ACO Group Bhd (272%).
Meanwhile, MQ Technology, up 233% to 5 sen, has been deemed the newest proxy to the glove rally, after it confirmed on Friday that it was one of the front frontrunners to acquire loss-making glove manufacturer Latexx Partners.