Hi guys, Please read to the end while we type now
Last friday OCR Jv with Pahang Govt securing ECRL job award powered up WZ SATU to 24 sen with increasing volume to 43 millions shares traded!
That triggered our enthusiasm!
In fact we have been wondering why Insiders/Directors were buying up so many WZ Satu shares from the open market
Something brewing?
see
WHY DID THEY BUY? OR WHAT IS GOING TO HAPPEN IN WZ SATU IN COMING MONTHS?
That piqued our interest. So let's do an investigation
There are 4 Reasons
1) REVIVAL OF BAUXITE MINING IN PAHANG
See this news 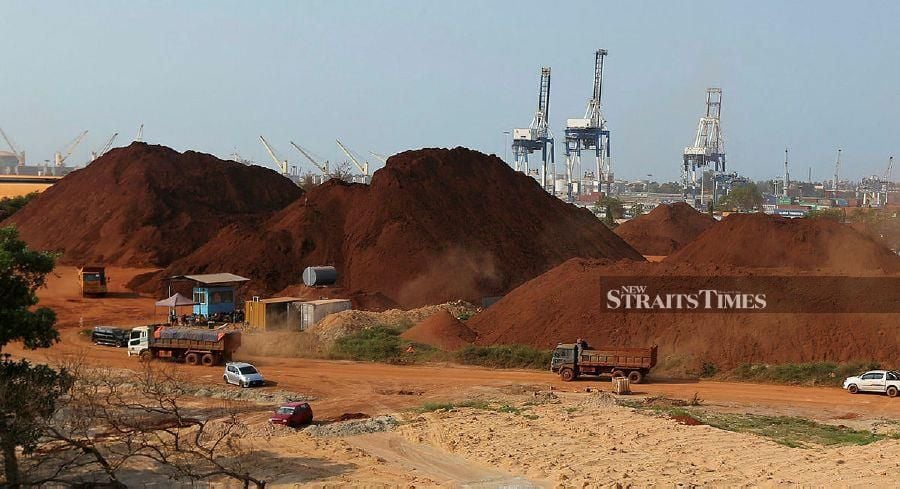 KUANTAN: Bauxite mining operations can begin anytime now so long as the operators are able to abide by the standard operating operators (SOP) set by the Water, Land and Natural Resources Ministry.
Pahang Menteri Besar Datuk Seri Wan Rosdy Wan Ismail said operators interested to carry out bauxite mining activities need to apply officially with the state government and ensure they fulfil all the requirements needed.
"Bauxite mining operations is just waiting to be resumed. We already have an agreement with the ministry.
Calvin comments:
Tin mining made Sungai Lembing the Richest Town in its Hayday. Now is Aluminium (Bauxite). In fact Bauxite mining contributed the Bulk of WZ Satu's earnings
How?
See this
The existence of bauxite minerals in Kuantan District have been recognised by the Geological Survey in 1937 with the area is underlain by basalt and associated dolerite dykes, which cut the underlying rocks.[5] Beginning from 2013, the government began to start small-scale bauxite mining in the area of Balok before being expanded into Goh Hill, Sagu Hill and Karang River.[6] With neighbouring Indonesia moved out from their long-time bauxite mining industry to be replaced by domestic metal processing industry with an immediate ban being enforced on the mineral mining in early 2014, this subsequently causing the shortage of worldwide supply particularly to China.[6][7] The Malaysian state of Pahang which has deposits on the minerals taking the opportunity to fill in the demands with the involvement of many unscrupulous parties with unregulated mining methods.[6] Following Malaysia's participation in the markets, their annual output of bauxite subsequently increased from over 200,000 tonnes in 2013 to nearly 20 million tonnes in 2015, becoming the world's top producer which accounting for nearly half of the supply to China's massive aluminium industry.[8]
https://en.wikipedia.org/wiki/2015%E2%80%9316_Kuantan_bauxite_disaster
Ha! The banning of bauxite export by Indonesia made Malaysia The Top Producer of Bauxite!!
Read again

Following Malaysia's participation in the markets, their annual output of bauxite subsequently increased from over 200,000 tonnes in 2013 to nearly 20 million tonnes in 2015, becoming the world's top producer which accounting for nearly half of the supply to China's massive aluminium industry.[8]
NO WONDER THIS SHOWED UP IN THE GROWING PROFITS OF WZ SATU'S PROFITS IN YEAR 2015
See
Review Of Performance (Refer to August 31st Year 2015 Qtr report of WZ Satu)
Quarter-To-Date
Forthecurrentquarter,theGroupgeneratedRM113.0millioninrevenuewithcivilengineering,constructionandoil&gascontributingRM89.3million.Thisrepresents79%oftheturnover,theotherbusinesses contributed the balance 21% of the turnover which amounted to RM23.7 million.
TotalcomprehensiveincomeattributabletoshareholdersoftheGrouphasleapttoRM21.9millioninthecurrentfinancialyear,whichismorethandoublethecorrespondingincomefromlastfinancialperiodofRM10.7 million ( for the 16-month period ended 31 August 2014 ).
TheGroupregisteredalowerprofitaftertaxationofRM5.1millionascomparedwiththepreviousquarterof RM6.7 million due to higher loss after taxation incurred by manufacturing and other businesses.
Onanaftertaxbasis,miningbusinesscontributedRM5.6million;civilengineering,constructionandoil&gascontributedRM1.8millionwhilstmanufacturingandotherbusinessesincurredlossesofRM2.3million
Read again
On an after tax basis,mining business contributed RM5.6million; civil engineering,construction and oil&gas contributed RM1.8 million whilst manufacturing and other businesses incurred losses of RM2.3million
MINING OF BAUXITE = RM5.6 MILLION PROFIT
O&G = RM1.8 MILLION PROFIT
OTHER BUSINESSES INCURRED LOSSES OF RM2.3 MILLIONS
IF BAUXITE MINING WAS SO PROFITABLE THEN WHAT HAPPENED?
See

From Wikipedia, the free encyclopedia
Jump to navigationJump to search
The 2015–16 Kuantan bauxite disaster is an ecological disaster which occurred from 2015 to 2016 onwards in Kuantan District of Pahang in Malaysia. The unscrupulous bauxite mining was blamed for causing soil pollution particularly along the lane of Kuantan highway where the lorries carrying bauxite which also spread to waters around the district, causing the environment to turned red as a result from unregulated mining activities that posed health hazards to both mine workers and the district surrounding communities lived along the mine routes

AS A RESULT 34 CONTRACTORS HAVE THEIR LICENCE REVOKED! AND BAUXITE MINING WAS BANNED TILL END 2019!
NOW MANY NO LONGER IN PLAY AS THEY ARE EITHER TOO SMALL OR CANNOT MEET THE STINGENT HEALTH AND SAFETY RULES
THAT MEANS WZ SATU WILL NOW GET AN EVEN BIGGER SHARE OF THE BAUXITE SPOILS!!
JUST LIKE MALAYSIA EXAM GLOVES HAVE CAPTURED 65% OF WORLD GLOVE MARKET = MALAYSIA IS THE WORLD'S LARGEST EXPORTER OF BAUXITE ONCE MORE = AND WZ SATU STANDS OUT TO REAP THE MOST!!