Home BURSA Which are the 30 most-sought-after stocks since April?

Which are the 30 most-sought-after stocks since April?

In fact, the daily trading volume has crossed the 10 billion mark as many as four times in the past 1½ months. What are investors picking up? Which are the most sought-after counters, gauged in terms of trading volume, since April?

According to Bloomberg data, the top traded counters for the last 15 weeks have been dominated by penny stocks, including big names. In fact, 90%, or 27, of the 30 top traded stocks were trading below RM1 as at July 9.

The three not of the penny variety were Comfort Gloves Bhd, Careplus Group Bhd and MyEG Services Bhd, all of which were trading below RM1 on April 1.

Overall, these 30 stocks accounted for 31.7% of the local stock exchange’s total trading volume in the last 15 weeks.

In terms of market capitalisation, more than half, or 18, have a market cap of less than RM500 million. In terms of financial performance in the past 12 months, 17 have failed to deliver profits. 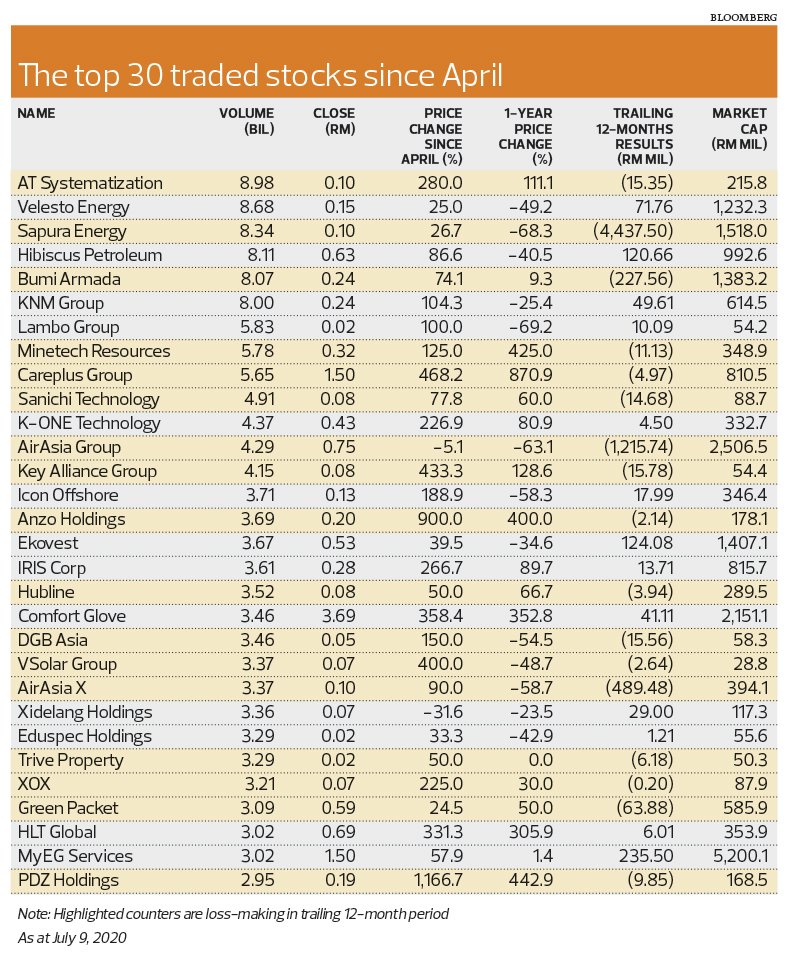 Among those that have posted huge losses in the past 12 months are Sapura Energy Bhd with a net loss of RM4.43 billion, followed by AirAsia Group Bhd with RM1.21 billion, as well as the latter’s long-haul arm AirAsia X Bhd with RM489.48 million. On a year-on-year basis, the three counters’ share prices have declined between 58% and 68%.

Aside from these loss-making companies, glove- and healthcare-themed plays were evident on the list, as investors showed a strong interest in those already in the business or had just jumped on the bandwagon.

The companies already in the business are Comfort Gloves and Careplus, while precision engineering and industrial automation firm AT Systematization Bhd — which leads the top most traded list with nearly nine billion shares traded since April — has announced it is acquiring an industrial glove maker. AT Systematization’s shares have since more than tripled to 10 sen apiece from a low base of three sen.

Among the top 30 stocks, a number have ventured into the production of ventilators and distribution of Covid-19 test kits. They include K-One Technology Bhd, Sanichi Technology Bhd, Key Alliance Group Bhd and MyEG, which together saw a trading volume of 16.45 billion shares in the last 15 weeks.

Sanichi shares were trading at five sen previously, while Key Alliance was at two sen.

Another favoured group on the list is oil and gas (O&G), owing mostly to the recovery in crude oil prices not long after the oil crash three months ago. At the time of writing last Thursday, Brent crude was trading at US$43.12 per barrel, after recovering from a low of US$20.37 on April 22.

Another investing theme that can be seen is e-commerce or those that provide artificial intelligence-powered vending machines. These include Lambo Group, DGB Asia Bhd and XOX Bhd, whose share prices have more than doubled, with a total trading volume of 12.5 billion.

Based on this top 30 list, it appears that trading interest has been driven largely by news flow and speculation over pandemic-driven potential gains.