THE race to develop a vaccine against Covid-19 does not appear to be a deterrent to a continued rise in the share prices of glove stocks. And this has led to the exponential growth in their market capitalisation at toppish valuations.

Thanks to the frenzied buying, Top Glove Corp Bhd became the second largest company on the local bourse last Thursday with a market capitalisation of RM70.45 billion, but slipped back to the third place on Friday on heavy sell-off. Nonetheless, will Top Glove finally overtake Malayan Banking Bhd (Maybank) to become the biggest stock on Bursa Malaysia?

Well, nothing is impossible. In fact, Affin Hwang Capital says Top Glove could be worth over RM100 billion if it is pegged at a higher price-earnings ratio (PER).

Assuming Maybank’s share price remains at the current level of about RM7.80 with a market capitalisation of RM88.2 billion, it will lose its status as the biggest stock when Top Glove’s share price tops RM32.80.

As the recent resurgence of Covid-19 may worsen the shortage of gloves, Affin Hwang sees higher average selling prices (ASPs) for Top Glove in the coming months.

“Our bull-case scenario indicates that Top Glove’s fair value could be as high as RM110.20 if selling prices increase 10% month on month in FY2021,” it says, noting that it is based on a PER of 52 times (similar to Hartalega Holdings Bhd’s valuation). 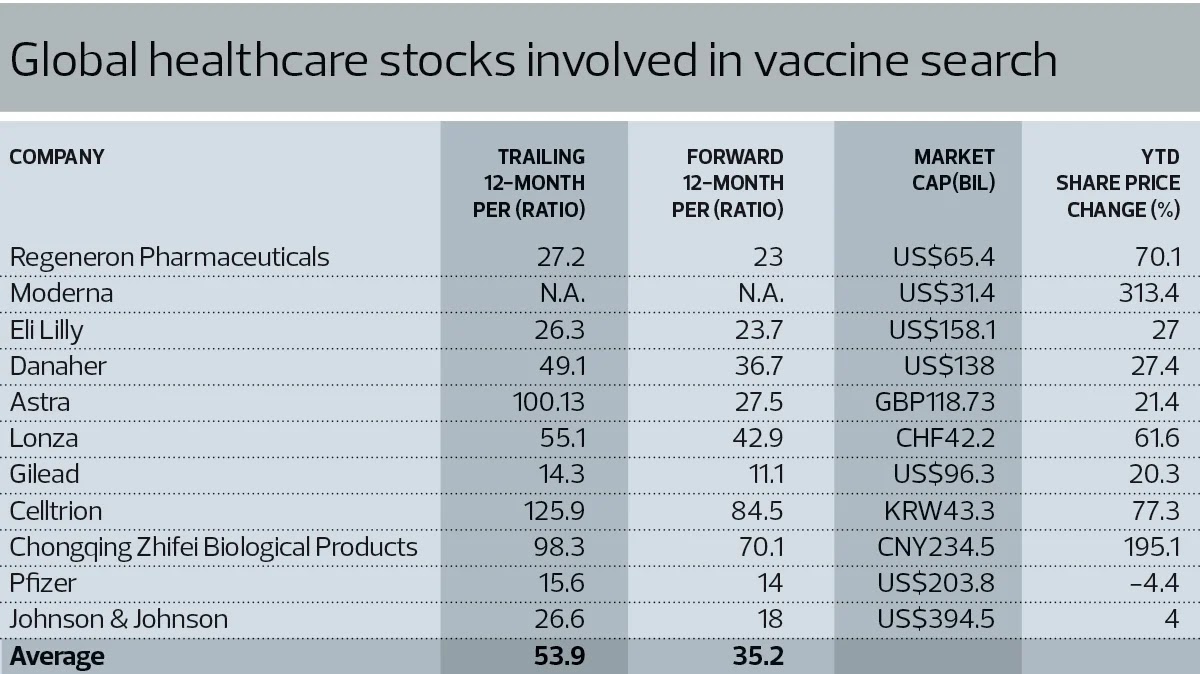 According to Bloomberg data, Top Glove is trading at a forward 12-month PER of 47.9 times, lower than Supermax Corp Bhd (62.5 times) and Hartalega (51.6 times), but higher than Kossan Rubber Industries Bhd (33.8 times).

Regional glove players’ valuations are much cheaper, except for Top Glove’s secondary listing in Singapore, which is at 48.2 times PER.

On the Singapore Exchange, UG Healthcare Corp Ltd has recorded the biggest surge in share price by 1,121.4% year to date (YTD), while Malaysia-based Riverstone Holdings Ltd has added 256.4% during the same period.

Thailand-listed Sri Trang Agro-Industry, trading at an undemanding valuation of 12.2 times, has gained 177.5% since the beginning of the year, while Malaysia-based, Australia-listed VIP Gloves Ltd’s share price has risen 186.2%.

For pharmaceutical players around the globe, the race for a vaccine is much needed not just to save lives but to propel their earnings. There are about 160 vaccines in various stages of development, according to the World Health Organization (WHO).

Both glove makers and pharmaceutical firms involved in the development of vaccines are beneficiaries of the pandemic. Though it is not an apple-to-apple comparison, we take a look at their valuations and share price change to gauge how the market has been reacting to their business activity.

Overall, the share price performance of prominent pharmaceutical companies has not been as good as the glove makers’, but US-based Moderna has managed to garner the highest YTD share price gain of 313%.

Moderna is the first US firm to get a potential Covid-19 vaccine into human trials, and it is entering the final stage of its human trials this month. It is partnering Switzerland-based Lonza to produce one billion vaccine doses a year.

China’s Chongqing Zhifei Biological Products has seen a share price jump of close to 200% as its vaccine candidate has moved into the second phase of human trials.

The valuation range for the pharmaceutical firms is between 11.1 and 84.5 times.

Among all, South Korea’s Celltrion fetches the highest PER of 84.54 times. Its early stage clinical trial of an experimental Covid-19 treatment drug was approved by the government — the first such antibody drug to be tested on humans in South Korea.

The collaboration with the University of Oxford puts AstraZeneca in spotlight, with the US pledging as much as US$1.2 billion (RM5.1 billion) towards their vaccine development.

This has lifted AstraZeneca’s trailing 12-month PER to a high of 100 times, but its forward 12-month PER is much lower at 27.5 times. The pharmaceutical company has said that it may begin delivering the vaccines to the UK in September, the soonest.

Meanwhile, the US government said last week that it will pay US$1.95 billion to buy 100 million doses of Pfizer Inc and German biotech firm BioNTech SE’s Covid-19 vaccine candidate to provide to Americans free of charge.

In Malaysia, Pharmaniaga Bhd and Duopharma Biotech Bhd have been tasked with undertaking the Covid-19 vaccine packaging process once a vaccine is developed. Their share prices rose following the news.

While there has been good progress in developing vaccines against the pandemic, the impact is likely to be minimal in the short term as the WHO cautioned that their first use cannot be expected until early 2021.

This could have provided the strong support for the glove stocks in the second half of the year, especially with renewed fears over the surge in coronavirus cases following the easing of movement restrictions globally.

All eyes are now on Top Glove’s next share price movement to see if it can emerge as the biggest company in terms of market capitalisation on Bursa Malaysia.