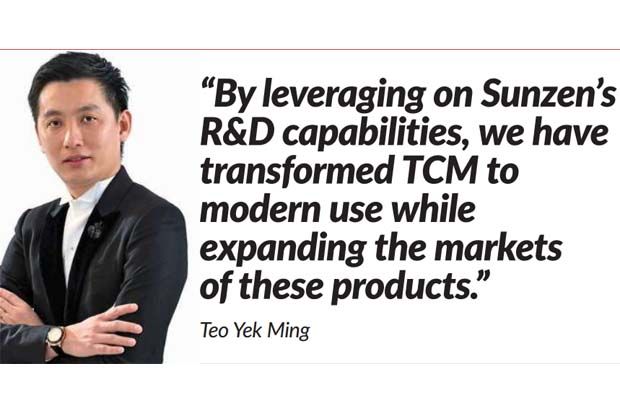 KUALA LUMPUR: Maker of animal and human health products, Sunzen Biotech Bhd, is focusing on expanding its traditional Chinese medicine (TCM) business partly by making it more adaptable to the younger segment as it strives for a slice of the RM32bil market.

It also plans to expand the business through leveraging on the boom of the digital marketing platforms during the movement control order (MCO) which began on March 18.

Newly appointed group managing director Teo Yek Ming told StarBiz that the expansion into the TCM business has been found to be more accessible and widely accepted by the general public.

“Such products may only have been known by the older generation previously, but through the efforts of its subsidiary Ecolite Biotech Manufacturing Sdn Bhd, these products have reached the younger group and even penetrated the Malay market, which is a rare feat, ” he said in an email interview.

Teo was appointed to his current position on June 16.

Ecolite is a 70%-owned subsidiary of Sunzen. Established in Malaysia almost 20 years ago, Ecolite has expanded its traditional Chinese medicine product portfolio to 300 varieties, from bird’s nest, tonics, and essence, to formulated herbs and single herbs.

TCM and the herbal market have recently gained a strong momentum and many companies are investing heavily in these areas.

In May this year, a medical consultant expert team sent by the Chinese government paid a two-week working visit to Malaysia and their programme included the sharing of traditional Chinese medicine applications in treating Covid-19 patients in China.

The market value for the herbal business in the country, according to analysts, is expected to reach RM32bil this year. The high market value is due to the significant attention from governments and international corporations which are investing more into traditional herbal medicine research. The worldwide annual market is worth more than RM251.1bil.

With the emergence of the digital business environment, Teo said Ecolite has changed its retailing strategies for its herbal healthfood and beverage products by fading out physical retail stores and capitalising on digital marketing platforms to advertise products on social media channels and smartphone applications.

“By leveraging on Sunzen’s research and development capabilities, we have transformed TCM to adapt to modern use while expanding the markets of these products to a larger scale such as pharmacies and supermarkets as well as on e-commerce platforms, ” he said.

Ecolite has expanded from being a local manufacturer and distributor of its own house brands to original equipment manufacturer, original design manufacturing, and exporting to countries such as Singapore, Vietnam, Indonesia, Taiwan, Hong Kong, Iran and China.

Teo said Ecolite is in the midst of obtaining export permit for bird’s nest to China, which will position Ecolite as a leading manufacturer of bird’s nest and related products in Malaysia.

As for Sunzen, the company aims to continue moving forward with its animal health and nutrition segment. Sunzen is a key supplier of red palm oil in the form of nutrition in animal feed. It also supplies disinfectant and sanitisation solutions as part of biosecurity measures to prevent any disease outbreak at farms.

He added that the company is currently on track to restructure and organise its animal health and nutrition segment, inevitably with some cost-cutting measures on the cards.

The company aims to step up its production to cater to the export market. Sunzen’s overall export revenue is at 46% of the group’s total revenue, and it plans to increase it to 70% within three years with its recent venture into Tomofat, an animal feed specially produced from natural and high quality palm oil.