When Covid19 started baring its fangs, many countries imposed MCO, and the general belief was that EVERYTHING should be down and out. Many certainly believed that equity markets were a sure write off for the rest of the year.

Not only Covid19, we also had the unnecessary plunge in oil prices to boot.


What happened was confounding. Not only did equity not tank and die, but they also staged a remarkable turnaround, unleashing a liquidity surge like a dam being cracked open. Who saw that coming?

Governments and central banks opened their wallets. While a substantial portion of the real economy is still in tatters, the stock market went off on its own tangent. I did turn bullish too a couple of months back, and as in any proper bull markets, there will be excesses.

But no one really predicted the deluge of interest locally. Initially we were launched into orbit via the glove makers. Given that that is almost the one sole sector showing signs of real profits. It started off innocently enough. Soon, new retail players started to join in. Was it because of boredom owing to the MCO? We will never really know but apparently from March till now, some 3 million new CDS accounts were opened!!! Three million!!!

Bursa and Sc were worried over the last 10 years over the declining number of retail participants. The average age of private investors were rising from 35 to 45 and if nothing new happened, soon the average age of retail investors will be 50. It appears that the generation reaching 20-30 from 2005-2019 had absolutely no interest in stock markets.

Bursa did plenty of roadshows, seminars, engaging speakers, even going to university ... but to little effect. What happened in one fell swoop, the younger generation all surged into the markets.

Hence the quality and roadmap of this bull run has taken a different trajectory from other bull runs of the past 20 years. We now have a more than substantive group with almost zero experience with limit ups, daily market corrections of more than 100, 200 points, limited appreciation of the role of syndicates and day traders.

In many ways, this bull run is not like any other bull run before on KLSE. We thought the markets can never return to the vibrancy mode of the 90s. Well, its stronger than the 90s in many ways. The volatility is there but nowhere as bad on the downside than during the roaring 90s. One explanation was that in the 90s, probably 50-60% of the trades were on margin WITH ZERO COLLATERAL. Hence any quivering will see dramatic sell downs.

These days, sell downs still happen but they were brief and easily supported. Hence in this sense the quality and sustainability of the retail funds this round is more solid. Nobody is buying with zero collateral.

While it is speculative at the moment, the powers to be SHOULD NOT stamp out the current market momentum. For one, the last 3 months have more than INJECTED SUFFICIENT STIMULUS, MONEY VELOCITY into the economy to more than cover the contractions owing to the prolonged ill effects of Covid19/MCO.

This will not only save the government coffers billions of ringgit in unnecessary stimulus packages but will help "redivert government funds" to other affected sectors not benefitting from the market boom. 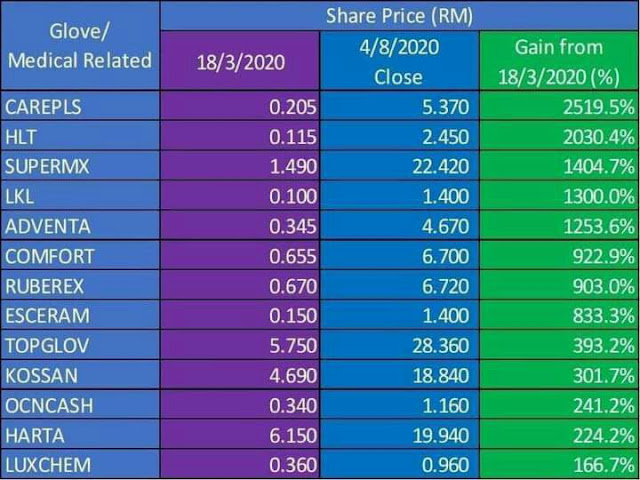 Let's just see how much "money" has or can flow to the economy. Let's just look at the glove related sector. Let's just assume 20% of shares were traded by retail and gains were pocketed.

That's just a few, and that's like more than RM28bn ... imagine a stimulus program announced to inject RM28bn. Coupled with the run on small caps, we are looking at an approximate figure of RM35bn thus far. It doesn't stretch the government's coffers of debt burden.

That conservative RM35bn has a velocity of money factor into the real economy. Depending on which economist you ask, its 5x-8x value to the real economy. Simply said, the monies will be primarily used in the economy and spending flows, it trickles down the line.

The worst thing to do is to save up the gains or used to pay down debt to the banks as banks are still very wary and hence the flow of funds stops at the banks currently.

3 million new CDS accounts, what you are having is a broad based rally benefitting an awful lot of people. It is not an elite club. It goes a long way to energising the real economy.


WHAT ABOUT THE BUST

When it happens, it happens, just don't prick it with man-made methods. Presently only things such as reduction of margin will shock the market lower. Brokers have already rules to protect themselves, no need to kill the goose laying golden eggs. It is not like the 90s, all brokers have adequate protection on their remixers, dealers and margin lines as they are.

There are a lot of positives on the current market. The only bad mothers are those who do not have a position and is willing a correction. Of course the exuberance caused many silly counters to sillier prices. Let it be, its part of a bull market. There will be excesses. All our accounts have margin limits. No one will die this round unless you borrow from Ah Long.