Home AGES anonymousdefame THIS LISTED COMPANY WAS GETTING DEFAMED BY IT'S ANONYMOUS CREDITORS !

THIS LISTED COMPANY WAS GETTING DEFAMED BY IT'S ANONYMOUS CREDITORS !

As one of the few who ACTUALLY DEALS with the previously wholly-owned subsidiary of AGESON BERHAD (7145), Prinsiptek (M) Sdn. Bhd. (or simply known as PRINSIPTEK), I can no longer stand these group of "scammers" trying to defame the company further.

Here's the link of the article trying to defame the listed company: https://aisahbintimohdliew.blogspot.com/2020/08/ages-7145.html 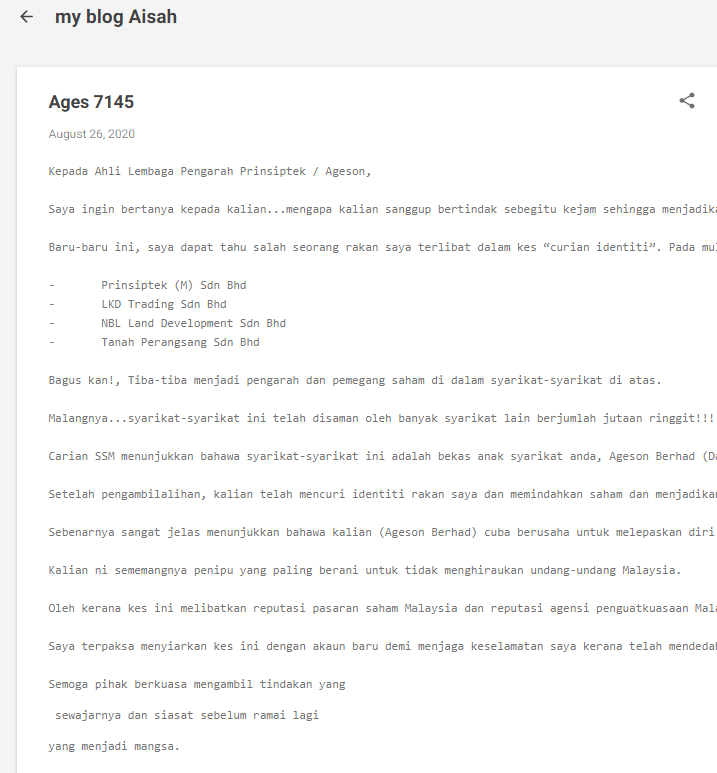 Firstly, the so called "victim party" consists of 2 Malay individual who accepted the shares of PRINSIPTEK for a extremely low price or even, for free. There WERE INFORMED ABOUT THE CREDITORS OF THE COMPANY pre-MCO period, and they were in discussion early 2020, before COVID-19 actually strikes our region.

Ok, let's take a moment and think - if you were to accept the shares and BECOME THE DIRECTOR of a company, will you not perform due diligence on the company? Yes?

Secondly, both of the victims were claimed as "stolen identity", what a joke! Do you think SSM is so stupid to allow change of shares (or what these idiots called "dilution") without actually identifying who are the beneficial parties?

And thirdly, which is the ridiculous part - if you were the check the CTOS of both of these individuals, you can actually see THEY ARE THE DIRECTORS of the said subsidiary(s).

So, why are they making such a fuss now?

After our investigation, we can confirm who are the irresponsible party behind all this. And I assure you AGESON had taken legal steps to pursue these idiots. So back to our main question - why are they doing this?

The reason behind is simple. The two said individuals backed out from the deal (without re-engaging or re-negotiating with the current management) because as COVID-19 strikes, the company is going to suffer more losses. Again, you can check who they are, and I urge businessman to NOT DEAL WITH THEM.

At the end of the day, AGESON new management had nothing to do with this incident!

Nevertheless, I believe investors are intelligent enough to spot fake accounts trying to defame the company, and I was just informed by my friend that these people are also defaming ARB BERHAD (7181) just for the sake of defaming the current management.

WHAT A BUNCH OF COWARDS!