Cover Story: These penny stocks are actively traded: Are they any good?

On September 03, 2020
AMID the spike in retail participation in Bursa Malaysia, there is one eye-catching trend: investors concentrating on penny counters — even if these companies have largely underperformed historically.

But earnings is not the reason these companies are hogging the limelight. Retail players are going for these counters because of the companies’ business venture announcements or speculation about them in share investing forums or online blogs.

All these counters traded at below 60 sen at their peak, allowing for ample participation by retail investors who have limited capital.
When any news is good news

In terms of volume, XOX Bhd led the pack with a total traded volume of 15.39 billion shares since June — more than seven times its issued share capital. From eight sen, the stock spiked to a four-year high of 31.5 sen in August.

The mobile virtual network operator piggybacks on Celcom’s cellular network, and also offers services such as insurance and cloud service for its subscribers. Since its Bursa debut in 2011, XOX has been loss-making for eight years and profitable for two.

The renewed attention in XOX also spilled over into DGB Asia Bhd. Back in April, the two companies expressed their intention to collaborate in a vending machine business, tapping XOX’s network and DGB’s core business in automated identification and data capture (AIDC) solutions.

As traders seek investment stories among small-caps in the current overheated market, any corporate exercise could easily attract attention. 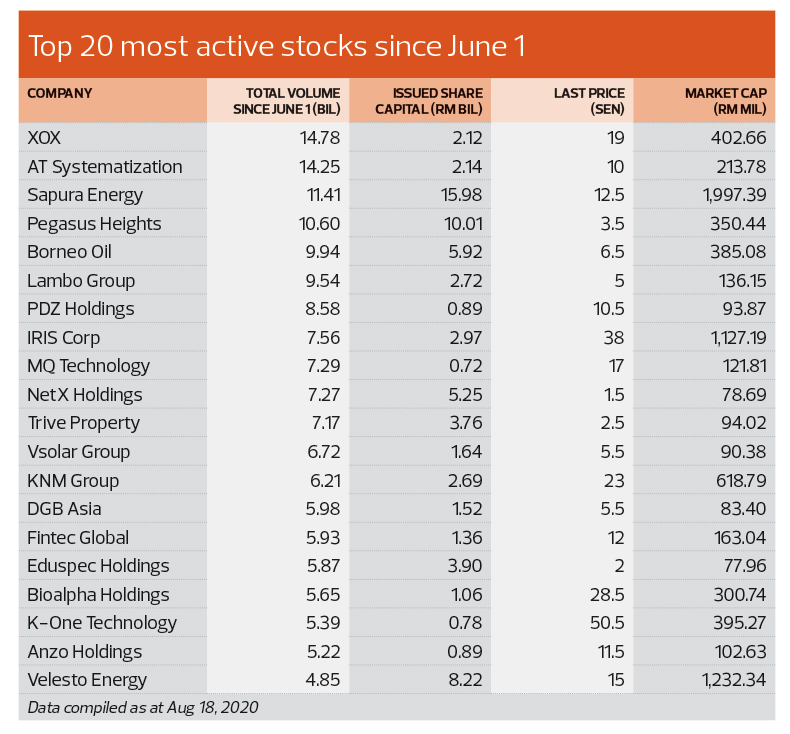 For example, there are industrial automation system manufacturer AT Systematization Bhd, which is venturing into rubber glove manufacturing, and ICT firm Nexgram Holdings Bhd, which is moving into personal protective equipment and vaccine bottling manufacturing.

K-One Technology Bhd, which develops electronic end-products and sub-systems, has made two separate announcements on its plan to manufacture nasal swabs for Covid-19 tests, and low-cost breathing ventilators amid the pandemic.

Another company, MQ Technology Bhd, which manufactures equipment for hard disk production, announced its intention to acquire a rubber glove factory, amid speculation that it is eyeing Kamunting-based Latexx Partners Bhd.

Meanwhile, Borneo Oil caught investors’ attention after it announced that it had found gold deposits in its mining land in Pahang. The Sarawak-based company currently operates five F&B brands, and owns limestone sites and agricultural land in East Malaysia.

PDZ Holdings Bhd, which provides shipping services, confirmed speculation that it was partnering loss-making Sanichi Technology Bhd to develop an e-commerce logistics hub in Johor, which speculators said would cost more than RM1 billion — or 10 times its market capitalisation of RM93.87 million.

Meanwhile, shares in health supplement products manufacturer Bioalpha were sought after, as it had secured a five-year contract worth RMB3.5 billion (RM2.1 billion) to supply ingredients for health food and nutritional meals to private and public sectors in China.

The excitement in AT Systematization also appeared to spill over into Trive Property Group Bhd, in which the former has a 6.99% stake. It bought into Trive Property in February 2019, as it wanted to collaborate with Trive’s solar division at the time.
Thematic play pushes traders to solar, tech and oil

There was also the recent hype in renewable energy stocks. Besides Trive, attention was also focused on VSolar Group Bhd, which is bidding in the upcoming Large Scale Solar (LSS) award by Putrajaya.

The interest in Sapura and KNM may be due to the recent rise in oil price to US$45 per barrel, although it is far from the desired price and the oil market is still considered volatile.

Iris, which produces passports and smart cards for local and overseas customers, saw its shares touch a five-year high of 44 sen this month, on news that it is one of two front-runners for the billion-ringgit National Integrated Immigration System (NIIS) contract.

NIIS is the new iteration of the scrapped Sistem Kawalan Imigresen Nasional (SKIN), which was awarded to Prestariang Bhd in 2017 for a 15-year concession worth RM3.5 billion.

The overheated market also boded well for Fintec Global Bhd, which is involved in the trading of securities. It posted a substantial profit jump in recent quarters, owing to a spike in the prices of its marketable securities.

Investors were also looking to ride the global tech rally, which probably contributed to the high trading activity in IT consultant group NetX Holdings Bhd. The company proposed a private placement in July to fund the development of its digital platforms and analytics systems.