Does the tech rally still have legs?

TRADING at a price-to-earnings ratio (PER) of about 46 times, Bursa Malaysia technology index has jumped 47% year to date to close at 55.71 points last Wednesday. Compared with its low in March, there has been a surge of 134%.

Of the 91 technology stocks listed on the Main Market and ACE Market, 72 counters (79%) have recorded gains in their share prices since early this year. Looking at the top 20 technology stocks that have seen the biggest gains year to date (YTD), over half (13 counters) are on the ACE Market.

MSCM Holdings Bhd has been the star performer, soaring 1,130.8%. The IT solution provider announced plans to venture into nitrile glove production, soon after Penang’s Hong Seng Group emerged as its single largest shareholder early this month.

Coming in second was Solution Group Bhd, which has jumped 647% YTD, underpinned by news that it is venturing into the vaccine business.

Analysts whom The Edge spoke to generally say the technology stocks are currently trading at toppish valuations, and are maintaining a “neutral” call on the sector.

“I don’t really have a ‘buy’ call for the time being — all are pretty much stretched. The stocks reached new highs early this month, so the upside is not much, based on the current market conditions. While you see positive market sentiment, you can’t expect a big surge in share prices.”

Having said that, he is of the view that the worst is over for the technology sector.

“Some [players] saw good recovery in 2Q earnings. Moving into 3Q, we should see a similar kind of momentum. Earnings should go back to the pre-Covid levels in the second half of the year.”

He sees 5G and internet of things as key drivers for the semiconductor players, but more earnings contribution can only be seen next year. When this development kicks in, the automated test equipment (ATE) players are poised to be the immediate beneficiaries.

For the outsourced semiconductor assembly and test (OSAT) players, the analyst says their efforts to secure new customers and improved utilisation rates will help strengthen margins.

However, JF Apex Securities technology analyst How Chi Hoong favours stocks that have high exposure to the semiconductor segment, such as Frontken Corp Bhd and FoundPac Group Bhd.

Global sales of semiconductors expanded 5.1% year-on-year in June to US$34.5 billion (RM144 billion) from US$32.9 billion a year earlier, according to the Semiconductor Industry Association. On a month-on-month basis, sales dipped 0.3% from US$34.6 billion in May.

How notes that competition has been intense in the ATE and OSAT segments, especially from China and Taiwan.

“Globally, technology stocks did very well in terms of share prices and earnings last year. But some local ATE and OSAT companies did not pick up much, so I suspect there was huge competition in the regional market. If you look at Inari, it didn’t report good results last year,” he says.

For the nine-month period ended March 31, 2020, Inari registered a 21.6% decline in net profit to RM120.28 million compared with RM153.43 million in the same period a year ago, owing to a decrease in demand for optoelectronic products, lower production volume, changes in product mix, higher depreciation cost and higher tax provision. 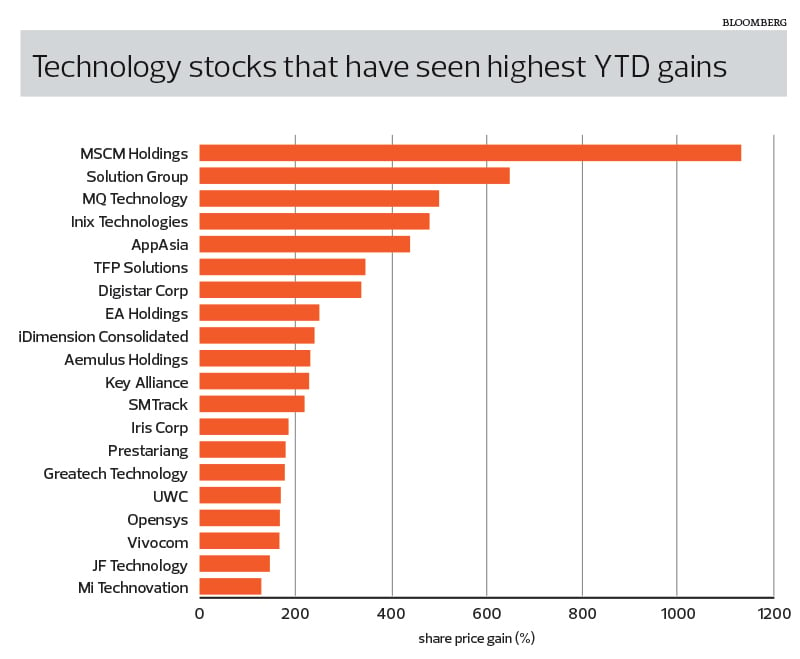 Nonetheless, he commends OSAT player Pentamaster for its advantages in providing product customisation to its clients.

How also sees strong growth for the hard disk drive (HDD) segment as more storage is needed in a post-pandemic world. The key players in the segment are JCY International Bhd, Dufu Technology Corp Bhd and Notion VTec Bhd.

Despite that, it is worth noting that there has been a valuation gap between the HDD and semiconductor players due to a more promising outlook for the latter.
Excessive valuations?

Given the ongoing rally in the technology sector, How warns of excessive valuations in terms of PER for some technology stocks, such as Greatech (59.1 times), JF Technology Bhd (98.4 times) and Mi Technovation (51.6 times).

“The share prices of good counters like Frontken and UWC Bhd, Greatech and Mi Technovation have gone up very significantly from their bottom levels in March. They even surpassed pre-Covid 19 levels.”

Nonetheless, he points out that Mi Technovation is a favourite of his, driven by its advanced technology.

Another analyst who declined to be named also lists Frontken among his top picks, with UWC being another favourite. Their share prices have jumped 61.6% and 169.5% respectively.

He says technology companies that have exposure to telecommunications, smartphones and cloud computing are likely to see growth in the second half, but those with exposure to the automotive segment may take a back seat.

Meanwhile, Inter-Pacific Securities head of research Victor Wan highlights that Malaysian technology firms are potential beneficiaries of the shift in the supply chain in the ongoing US-China trade war.

“This is given that our players have vast experience in taking on supply chain operations. So, that is driving the local technology sector.

“Certainly, the market is looking forward to 2021 and that might keep the speed running. As valuations are on the high side, I would expect some sort of pullback, but we are not seeing it at this point as we still have a lot of participation from retail and institutional players. That has been the factor leading to the run-up in technology stocks, especially the penny stocks.”

Wan regards the overall technology sector to be close to its fair value and says it would need earnings revisions to climb higher.

Recently, Apple’s market capitalisation jumped to over US$2 trillion, the first time a US company has surpassed that level.

However, the non-bank backed investment bank analyst doubts there will be any spillover effect on local players along the tech behemoth’s supply chain, such as Inari and Globetronics. This is because Apple’s earnings are mainly derived from the services segment and not the sale of iPhones.

The iPhone 12, with 5G capabilities, is expected to be revealed at end-2020.
Analysts’ preferred tech picks
Frontken

Frontken, which achieved a record net profit last year, is aiming for a repeat this year with another double-digit earnings growth, after delivering a strong set of results for the first half of the year.

Frontken is a provider of surface metamorphosis and mechanical engineering solutions. It serves a wide range of heavy industries such as semiconductors and oil and gas. The company also specialises in engineering services that include coating, machining and grinding, manufacturing and precision cleaning.

FoundPac, which designs and manufactures high-performance test sockets and other materials for semiconductor giants, is trading at a significantly lower PER of 36.8 times compared with its closest peer JF Technology (98.4 times).

For the financial year ended June 30, 2020, FoundPac’s net profit rose 36% to RM16.06 million versus RM11.81 million a year before, driven by higher contribution from both the precision engineering and laser stencils segments.
Mi Technovation

Mi Technovation is seen as a potential beneficiary of the remapping of global supply chain facilities, being a proxy to the growing adoption of wafer level packaging technology.

Seeking to reduce dependency on the semiconductor industry, it aims to be a player with multiple products across multiple industries by 2023.

The integrated engineering support services provider has plans to move higher up the value chain into the technological devices and equipment supply sector by undertaking the manufacturing of front-end semiconductor equipment, 5G test equipment and more complicated life-science equipment.