An off market transaction of 30.8 million shares of Supercomnet Technologies Bhd (Scomnet) was done at RM1.95 on Tuesday, Sept 1.

This represents a 4.78% stake in the company, which makes wires and cables for large medical device makers in the United States and Germany as well as carmakers like Proton and Perodua, among others.

The buyer is believed to be an well-known institutional investor.

As of Sept 3, Scomnet closed at RM1.98. At this price, the stock has a market capitalisation of RM1.28bil. 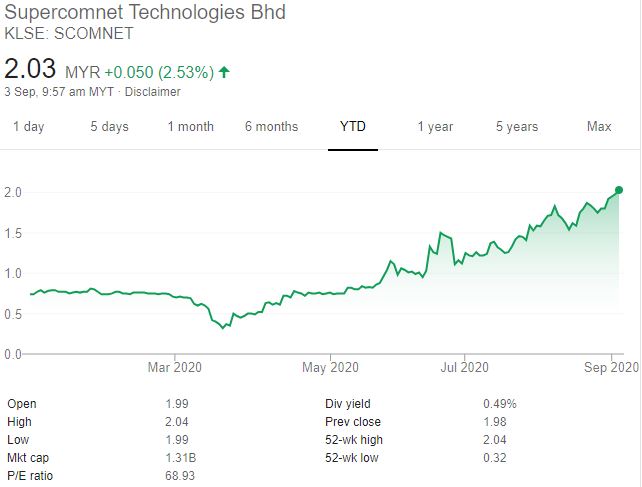 This means that the institutional investor is buying Scomnet at the current market price with no discount.

Typically, it is unusual for new major shareholders to enter a counter at no discount - unless they really trust the company's growth story.

Why is the new investor buying a stake in the company considering the stock is up 520% from its year-to-date low of 32 sen and is trading at a historical PE of 64 times?

Scomnet is a leading OEM cable manufacturer specialising in medical devices and automative cables. Since its venture into the medical devices segment back in 2017, the company has been delivering 10 quarters of growth.

An updated UOB KayHian report gave some hints of what is in store for Scomnet.

First of all, UOB KayHian is forecasting Scomnet to deliver RM29.5mil net profit for FY20.

As of the first half, Scomnet has so far delivered some RM10mil. This means, UOB KayHian is anticipating a doubling of earnings in the last two quarter of this year.

It is also forecasting a net profit of RM51.6mil for FY21. This means a 74% jump in earnings from FY20. This is growth you don't mess with.

At this rate, when do we think Scomnet will hit net profit of RM100mil?

While Scomnet has pretty much seen a surge in its earnings due to the growth of its medical devices segment, out of the blue, it has secured a new automotive client -  French car manufacturer - PSA Group.

According to sources, this contract has been secured for quite awhile, but has been delayed due to the MCO. The contract value is sizeable and recurring in nature.

"Scomnet is embarking on a fantastic 2H20 and beyond," says UOBKayHian.

This will be further driven by the automotive segment, which will see a pent up orderbook and has lifted utilisation rate close to 100% post-MCO.

UOB KayHian is expecting the PSA Group to contribute an incremental 10% to 20% of group revenue from 2021 onwards.

On the medical devices front, Scomnet will be kept busy for years to come.

UOB KayHian says that earnings visibility for its medical orderbook is high. It expects to see a surge in the sales of its medical cable products with lucrative margins.

"Incremental revenue from new products (D’Clot Catheter, Colonoscopy GI and Gastroscopy GI which will be in production in 2H20)," says UOB KayHian.

Thus not surprisingly, UOB KayHian is maintaining its BUY call but with a higher target price of RM2.40.

Based on the above reasons, it has adjusted its 2021 revenue and net profit forecasts upwards by 18% and 12% respectively.

"Our target price of RM2.40 is pegged to 30x 2021F PE, which we deem has reasonably factored in the industry’s 3-year mean PE of 29.6x and is justifiable given Scomnet’s multi-year growth story."

It is noteworthy that Rakuten Trade also has a BUY call on Scomnet. On Aug 17, the research house upgraded its Target Price to RM2.18, when the stock was just about RM1.75.

The stock has since risen further to RM1.98 as of yesterday's closing (Sept 2).

With crazy growth at hand and a growing pipeline of new products, isn't it a matter of time before Scomnet hits net profit of RM100mil?