KUALA LUMPUR (Nov 17): Penny stocks have dominated the top active stocks in recent months. Interestingly, many of them are related via cross shareholdings.

All of these counters are related to each other either via a chain of common shareholders or common directors, with Fintec Global — the eighth top traded counter last week — seemingly at the centre of it all.

On its website, the company says it is involved in investing in public-listed companies (PLCs) and “forming business partnerships and alliances” to create synergies and value for shareholders.

It also describes itself as a “primary incubator” for several PLCs involved in sectors ranging from renewable energy, financial application technology and multimedia solutions to food and beverage, oil and gas and agriculture. 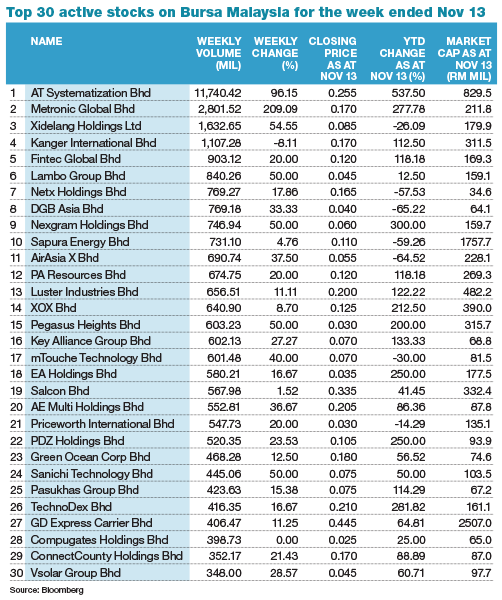 Over the past week, the counter gained 20% and saw a 118% increase in share price since the start of the year till Nov 13.

Fintec Global’s wholly-owned subsidiary Asiabio Capital Sdn Bhd has a 28.29% equity stake in AT Systematization — the most traded counter last week — which accounted for slightly over 16% of the total trading volume of all shares on Bursa Malaysia over the period.

This company, which is involved in precision engineering, has seen a meteoric rise in its share price for the year till Nov 13, gaining about 538% to its closing of 25.5 sen last week. The rally is driven by news of the group’s venture into the manufacturing of rubber gloves.

Asiabio Capital is also a substantial shareholder of photovoltaic solar group Vsolar Group Bhd — also among the top 30 active counters last week — with a 14.12% equity stake as at July 16, 2020, as well as DGB previously, before its holdings were diluted following a share issuance exercise.

DGB has common directors in Xidelang as well as Seacera, namely Datuk Jacky Pang Chow Huat and Nicholas Wong Yew Khid respectively, while Key Alliance has a 12.59% stake in XOX.

XOX, a mobile virtual network operator, has gained 212% since the start of the year to its closing of 12.5 sen on Nov 13.

The group also emerged as a substantial shareholder in Macpie Bhd last month, after its subsidiary XOX (Hong Kong) Ltd had acquired a 5.66% stake on the open market. As at Oct 22, XOX indirectly owns 13.11% in Macpie, which was recently slapped with an unusual market activity (UMA) query by the stock exchange.

Koo Kien Yoon, a director of Vsolar, also sits on the board of Lambo Group, the ninth most traded stock on the bourse last week. Lambo Group is involved in providing digital solutions including e-commerce platform LamboPlace, last-mile logistics platform LamboMove and e-wallet LamboPay.

Another Fintec Global director, Tengku Ahmad Badli Shah Raja Hussin, is a director of PDZ Holdings Bhd, in which mTouche and Sanichi hold a 1.8% and 5.44% stake respectively.

PDZ has the same executive director-cum-CEO, Christopher Tan Chor How, as MNC Wireless Bhd, in which Metronic Global Bhd holds a 12.06% stake.

Metronic’s share price soared 209% over the past week to 17 sen on Nov 13, ahead of its announcement that businessman Datuk Tan Choon Hwa would be appointed to its board as vice chairman.

Tan is currently the vice chairman and non-executive director of Ikhmas Jaya Group Bhd, and is also present on the boards of Ni Hsin Resources Bhd and Inix Technologies Bhd.